(by neil crud and andy fatman) 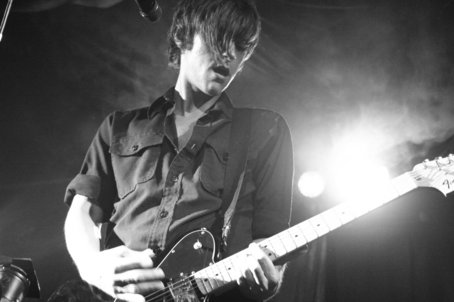 (Crud)
Due to missing out on his afternoon wine tasting session, Andy Fatman snorted a bottle of Gin in the car on the way to Liverpool. This is a lie but we have to maintain a sense of recklessness & also create further folklore for the future. With the Crudmobile duly rested Mrs Fatman took us & Katy Pie to the excellent venue that is Liverpool Uni. I do like Liverpool, & so did 44,000 soccer fans who were also converging on this splendid city. (They were to leave 3 hours later very happy as did we).
I think we should sack Manchester altogether, it seems an aggressive place compared to the ‘pool, also there’d’ve been a lot of disgruntled ManU fans (all from the Home Counties) trudging off after Middlesbrough beat their team tonight (how dare they!). Did you see the tabloid scum press the following morning? Some girl had jumped at David Beckham & put her arms around him! It must’ve been terrible for him, I do hope he’s ok & not hurt, both physically & mentally. If any of you are concerned or scarred by this incident The Scum have set up a helpline number where you can speak to a trained therapist.
Anyway, enough of talking football & Beckham bollocks, we came here tonight to see a double header. Fatman was here for the Coopers & I for the BRMC. We left Katy at the back of the venue by the tour buses to do her ligging & dazzle the bands with her sparkly shoes & hit the bar for some funny tasting Carling (though it may have been the throat lozengers I was eating).

We had shipped Steve Sync off to Blu to run his critical pen over Jives Room & Lantern, but he knew he’d have to get all his own drinks in & couldn’t slope off to the bogs when it was his round, so he stayed at home for some eBay therapy. It was left to Danny Crud to do Blu & he was so pissed off cos we couldn’t get him a BRMC ticket that he went out with his bad head on. Basically he said it was pretty busy; Dusty Moo is moving to Tenerife, Jives Room played My Generation out of time & Lantern played 4 or 5 good tunes, had a good guitarist but he was a bit of a show off (check out slanderous parody website via my Message Board!).

(Fatman)
The journey across to the North Wales capital provided us with an opportunity to continue a long-standing debate concerning The Coopers. With arguably their biggest fan (Kat-y Pie) joining in and fighting my corner, I knew I’d stand a better chance against the bald, lanky self-opinionated one. You see, Crud is still to be convinced by TCTC, despite the fact I’ve borrowed him 100’s of albums in our long friendship, 2 of the best being recorded by the aforementioned Clause. Generally, we agree on what’s good, bad, average or unique (save a few exceptions). The fact is “See This Through And Leave” and “Kick Up The Fire, And Let The Flames Break Loose” albums are made up of these qualities, making them all the more interesting. After chancing on the band (performing “Film Maker”) grabbing & ripping the heart out of a CD:UK audience on Saturday morning, I was hooked. Gushing with enthusiasm, the album in hand on the way to Crud Towers, I felt duty bound to spread the Gospel. And the response I got?
“….sounds like a Sons of Selina demo tape.”
For fucks sake… there’s nothing like building your own part up, eh? Ever since, I’ve been about to change his mind (anyone who knows Crud will also know that’s no mean feat!) Which brings us to tonight…it started off as a double date with Katy acting as contraception, but she having none of it, obviously save herself for the aftershow.
A couple of Carlings to ease up the pre-show tensions and it’s straight to the front for me and the digi camera. Fuck it, it’s fucked, hence no pics with this piece. I stay down there longer than I’d intended, mainly due to the chosen set list, all great songs they just seemed keep the eager throng a tad subdued, although a vaguely credible sing along to Blind Pilots (well the chorus, anyway). Not until the aforementioned Film Maker did it really kick in, and kick in it did! The remainder of the set is a blistering culling of the cream from both albums. New Toys seems to be a popular choice for the next single, which will please my 4 year old; she already sings it out loud from her car-seat in the back.
Back at the bar, I chance asking Crud his opinion, and the iceberg is melting….to paraphrase Katy later
“….if Crud thought that was shit he’s a fuckin’ liar & deserves a slap”.
My only criticism was that slow start for such a short set. Apart from the fact that, how does a band whose look is often talked about & widely copied end up with a Mickey Pierce look-a-like on keyboards 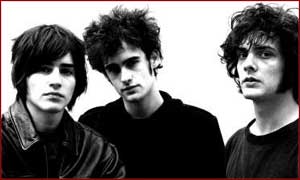 I remember the Talking Heads doing a tour with a very impressive stage show; you see, I’m old enough to remember that band, for I am past it, a has-been & shouldn’t involved in the North Wales scene, how dare I like music at my advanced age! Anyway, the Talking Heads opened their show with a completely bare stage with only a microphone to boot, & David Byrne would come on with a tape player, press play, strum up his acoustic guitar & start singing Psycho Killer. As he’s playing, the drums are being set up, as is the rest of the band’s equipment, the lights etc etc, so within half an hour more & more elements have been added until the full set is up & running. A great concept, which has yet to be matched, but the Black Rebel Motorcycle Club did remind me in a way of this when Peter Hayes first walks on with an acoustic guitar to strum the opening song (complete with a plaster-cast for his broken thumb), he’s then joined by his colleague Robert for the next number (again acoustically), before Nick provides the beats & they kick into the set proper. The obvious & much used Jesus & Mary Chain tag is pretty evident from their appearance & sound, & there is no denying these guys could be clones; but JAMC were an ace band & so are BRMC with their long guitar jams & bluesy-punked out tunes. And I am one helluva sucker for anything with repetitive guitar riffs (Hawkwind taught me all I know).
Such is the extent of my record collection, the volume of CDs coming in & the sheer workload of my lifestyle that I’ve not yet even listened to their 2nd LP, its still sat in my In Tray at home, Jesus! I’ve only just started playing the 1st Paul Weller album, I’m that far behind! Didn’t even realise he’d left The Jam!

My t-shirt collection is getting pretty impressive thanks to the philosophy of refusing to pay through the runny nose for a tour t-shirt that’s £16 & of very poor quality. They call them ‘One Wash T-shirts’, yep, one wash & they’re fucked. So I pick a double sided printed tee outside the venue for a fiver & its top quality. You official tour t-shirt kiddies? What mugs you are!