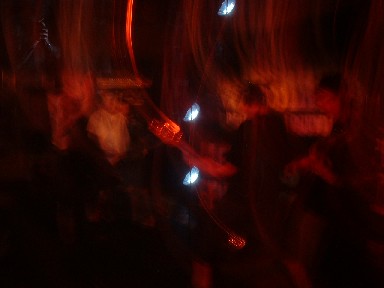 So after dropping a suspicious, nastier than Anthrax, package off in the letterbox at the BBC in Wrexham, hoping to dirty bomb the airwaves with Skinflick on a Sunday night I made my getaway to the Talbot. Once a sports bar where the main sport would be a good student kicking it’s now Wrexham’s answer to a hard rock café, full of memorabilia etc., but quite cramped, and expected to get ripped up fine style by some hardcore punk madness. A massive £1 to get in as well.

A slow, heavy and howling guitar intro for Bolton’s Scarlet Bullet Lake (above) gives way to their core sound, a crunching alt-metal/hardcore attack. Reliably informed it’s in the vein of Killswitch Engage, mid-paced but intricate, punchy riffs, with a pretty relentless screamed vocal over the top. Good mix of the light and shade, dropping stuff out before kicking back in again. No real stand-out song but that probably just signifies solid performance none the less 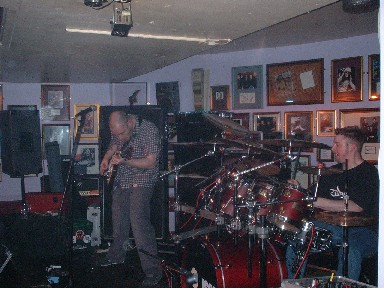 Seems to have taken a long time to get round to seeing ISOR and extremely glad that’s been resolved. Despite being residents of Rhyl they are one of the few local bands to get off their arses and trek around the country, so despite not having as much of a profile locally they are more known in the world at large, signed to a label, record in the shops, etc. It’s a simple formula, fish can only grow as big as the tank they’re in… (which sounds a bit like one of their song titles).

So, ISOR…, quite a revelation that this 2-piece can produce such a massive intense sound but that’s testament both to their playing skills plus a wise investment in top technology. Much as it pains me to say it (I believe the optimum number of bass players for a band is about 3) they did just about get away without one. Mainly I think because the rest of the rhythm section i.e. the drums was such a thumping powerhouse, even standing while playing at times to add a bit of extra oomph. Combined with a great guitar set up they were able to express their complex, twisting, brand of metal in an extremely confident and professional way. Rapidly changing structures, from mellow and emotional to furious screaming blasts of noise, touching base with the math/jazz core of Dillinger Escape Plan but never losing track of the vital flow of a song. Added to that the impression of them enjoying themselves in their “work” plus the amusing/clever song-titles (“living with a ginger secret”, “I know what rhymes with orange”, “you can’t make a clown out of cocoa”) and it’s a big thumbs up. 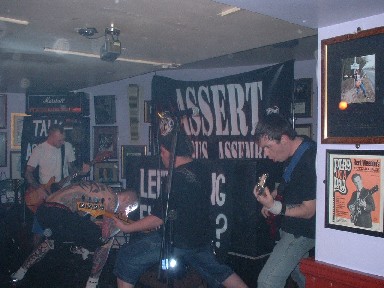 The ground zero style impact of Assert at the West Shore in Llandudno a couple of years back was more than convincing enough to come and see them again here. Enforced and sad change from those days though through the death of their phenomenally fast drummer Chris, and while they had temporarily replaced him with Carl of Midlands death metal veterans Cancer they have now evolved to use machines.
And it’s definitely not a turn for the worse, as inventive/topical samples and even break beats refresh their sound. Not that the conventional musicians performance is in any way dull, it’s straight-up hyper-hardcore, relatively simple but relentlessly fast riffs, flailing instruments, something like 15 or more songs in 40 minutes or less. The show is grasped by the scruff by vocalist Britt, giving polite encouragement for people to move up and get involved but in the face of his fearsome gravely delivery and constant movement in this confined space maybe they’re intimidated. Still, he’s able to deflect that through the smiles raised at borrowing other peoples hair to give himself a comb-over etc. And maybe people are right to sit back and take in what Assert are about as well, because it’s unapologetically politically charged, social comment condensed into couple of minutes head battering tunes, with the hooks of repeated titles/lines such as “Insurrection Rocks”, “School of the Assassins”(“they’ll kill us all!”), “Never Forget You”, “1,2,3,4 go!”, powered up with backing vocal shouts, nailing their point home. (As if the stage banners e.g. Talk-Action=0 were going to let you forget that) Final chaotic ending blends in to played sample of DK’s “Viva Las Vegas” maybe to show it’s a show after all, and they’ve delivered the goods once again.

Speaking of goods how many places can you buy a new vinyl album, ep, and t-shirt for a tenner? Go to an Assert gig and find out.