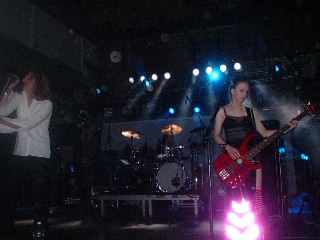 “Guten tag, Leipzig. Schbonc, schbonc!”
Sadly, this proposed opening on-stage gambit (with accompanying hand gestures) was dropped due to fears of the band collapsing in stitches and there was a vaguely serious job to be done in bringing the Skinflick experience to a fraction of the 19,000 children of the night (Goths, dark wave techno heads, industrialists, Vikings, dwarves, etc.) descending in a solid black swarm on sunny Leipzig for the 4 day festival over this bank holiday weekend.

However, it did also sum up the good humoured enjoyment of this jaw dropping taste of the high life for the band, provided largely due to a friendly European booking agent liking their stuff and giving them a break, putting the many gigs in shoebox pubs to the proverbial bloke and his dog in sharp contrast. 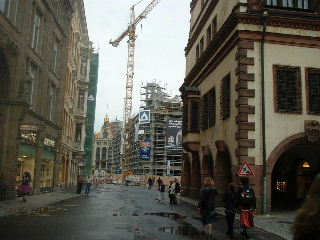 The start of the expedition had a familiar feel though, back of the misery machine (transit) through the night from North Wales to Stansted, although we were entertained with the prospects of vampire role play (for real) and trifle fetish parties (maybe not). Dawn was breaking upon our arrival, and after extensive searches due to the amount of metal contained within industrial boots through to the bar, which was open, so why not? Of course Guinness is good for you, for breakfast as at all other times and medicinal drinking continued on the short flight into the heart of not so darkness, as it was gloriously sunny as we landed on what resembled (and probably with good reason) an old Luftwaffe base at Altenburg. A brief wait (always worrying when relying upon best laid plans) before being picked up by our chauffeur for the weekend and then through the forests to Leipzig. I’d been expecting it to be a bit of a grim place having ended up the wrong side of the border in old East Germany but that wasn’t the case at all, at least not for a short visit. Sure there were some flat concrete urban wastelands and decaying industry (how fitting) but also some really old, ornate, mediaeval/baroque buildings that had obviously survived various wars, as well as evidence of the massive modern, shiny investment since reunification, including the four-star hotels we were booked into. It must still be a culture shock to the residents of this former headquarters of the Stasi (secret police), never mind having all these wierdos visiting for the past 13 years of this festival. Maybe that’s why it was so quiet in the city, they’d all left to get some peace, so quiet in fact you could almost hear past contributors to the city’s cultural heritage like JS Bach and Franz List spinning in their graves. 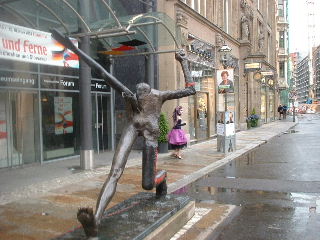 We ventured out and about that afternoon and evening, marvelling at the sheer numbers of black-wearing folks and occasional extremity even by our standards of oddness. The tram system was fantastic for getting about, especially as we gradually gathered you didn’t necessarily have to pay for it, and enabled us to spot such fantastic sights as donner kebabs for 1 euro, although strangely enough these places were all boarded up. Checked out the venue for the next day, one of many scattered across the city, a semi-converted factory called Werk II, still containing various bits of abandoned machinery, maybe the ghosts of former workers too casting their eye over the hundreds gathered within. Listened to a track or two by Copth Nia, brooding vocals over dark electronics, with some live drumming on the side, but food and an early night via the hotel bar were calling. 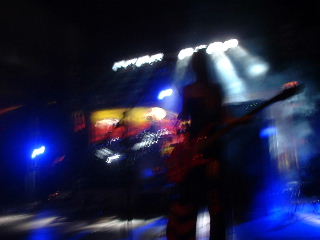 After a buffet breakfast that stretched over several tables and multiple return visits (before we even discovered a whole extra room full of complimentary food) we hauled ourselves back into the transport for an early set up back at the venue. Always better early than late but it does lead to worries that things had just been going to smoothly when there’s no equipment etc. there and the language barrier doesn’t help in establishing wos ist lost? Anyway, soon a massive professional operation swings into action, with a backline hired in purely for Skinflick’s benefit (as the rest of the day is largely electronic based), colossal PA, and full lights and video show. Plus they’re one of the only bands who’s blagged a rider for the dressing room, and all catering is also put on. The agent also turns up to sort out business side and it’s all systems go. 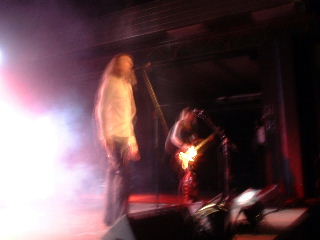 With this kind of set-up it’s hard not to be at your best, even if the nerves are probably cranked up accordingly, and it was a great, short show. The vicious power, sleazy grooves and haunting dark ambience all hit the spot, and although it wasn’t as busy as we’d seen it, this being an afternoon slot and not everyone out of their coffins yet, people were spilling into the place all the time, and the reception was good. Set list – Fuckbuddy, Denial, Two Ton Loser, Rise, The Hole, Pearls Before Swine, Belief. 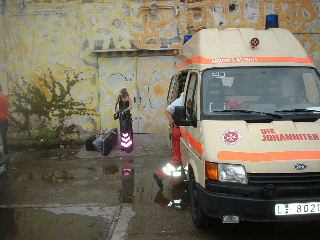 So, over in no time, muchos euros received, beers cracked and gear shifted. Next up were Dioxyde from Spain, 2 guys playing nasty industrial techno and Das Parapat, techno goth edging into theatre with their attention to costume and violinist and dancer encased in high polythene tubes/ “Spinal Tap-esque” cocoons at the sides of the stage, but our carriage awaited so back to hotel (bar). 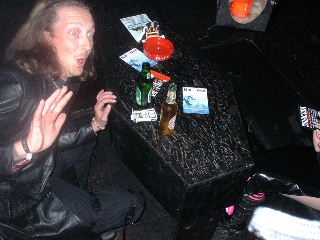 Out for celebratory excellent curry, then to a club called Dark Flower, evidently Leipzig’s year round home for the Goths, with it’s dark and dinginess, coffin tables et al. Me and Mr. Black then went on to see Coil, longstanding UK exponents of odd ambient/techno experimentalism. The venue was Haus Leipzig, a much more ornate and light hall that maybe more commonly held chamber music than this strange, hypnotic electronica. I’d only heard a couple of tracks before really but it didn’t take long at all before the looped sounds and repeated vocal lines lulled you into a trance, two masters of the vibe production in towering “curtain hats” at either side and an electronic xylophone player in the middle, all producing the sounds from scratch, no backing track here. Not dance music but definitely engaging the mind in subliminal ways all the same, and linked in excellently with a black and white show of images disturbing and anguished. The vocalist we recognised from our hotel, big beard and eyes ever so slightly too open, his intro to one song “This is for those times when only psilocybin will do, when you go to your back door, look over the fields and men are approaching with hammers” giving a clue to their inspiration, and hey, I know how he feels. I was somewhat less grateful to see his bare arse on display through gap in his mummy-like cotton bandage suit. Quite a stunning show all the same, the music that is! 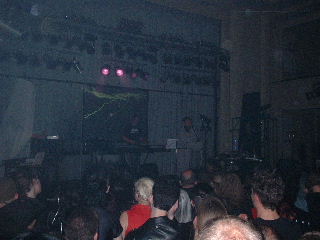 Not wanting to miss out on the opportunity while here we made our last port of call at the underground maze of the Moritz Bastei. It’s normally some sort of student venue but what it was originally god only knows, air raid shelter, factory, crypt, wine cellar? Anyway, we descended 60-80 feet down in these huge brick tunnels where all the survivors of the days events were gathering for the festival’s close to DJ tunes of all sorts, anything from the Cure to the Dead Kennedy’s, discovering another off-shoot section of banging industrial techno, and enough visual sensory overload of the freaky types there to leave you in disbelief. Duncan made friends with a gimp and then it was time to go to enjoy the equally bizarre delights of late night German TV.

A long trek back to sunny North Wales the next day but a trip to remember for sure. It’s set-up further Euro tours but don’t worry, Skinflick won’t be neglecting the father/motherland, gigs in Rhyl and Newport in July. And I’d recommend for sure any one who calls themselves goth or dabbles in the dark and weird to check out the festival some time, it’s cheap as chips for what it is, everyone’s friendly and you’d be blown away by the scale and show of it all.