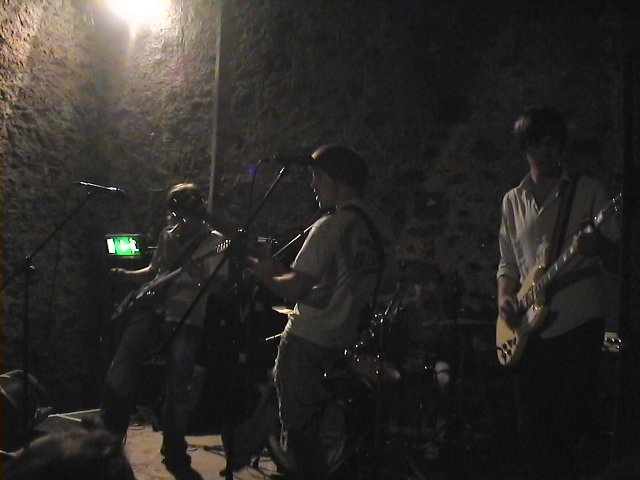 This is a first! Steve Sync drove! Hell has freezed over, Arabs & Jews are embracing each other, Pop Idol has been shelved! There is a downside though; it meant I was able to drink, & with the Castlemaine XXXX tasting fXcking shXt I had to consume the far stronger Carlsberg Export. It was great at the time, but boy am I suffering the next day!

They say you can always judge a man by his recycle bin (they don’t, I just made it up) & a glance at Steve’s led me to chuckle as it was overflowing with beer & wine bottles sank in the last 2 weeks. He has asked the council for an extra box as the kids are tripping over the excess on their way to school. (Fatman has a recycle skip for his bottles!).

We travelled the 32 miles to see The Caves only to be told by Rhys of Complete Control Music that they cancelled, citing the usual ‘our drummer has hurt his arm’ excuse; bloody hell Def Leppard got over that problem! 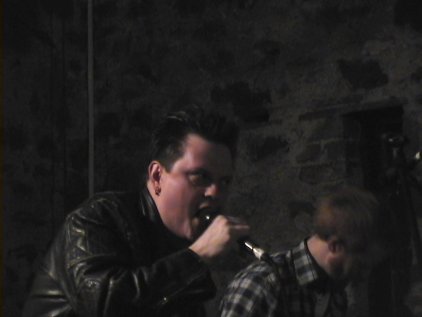 Kobe are a band I was keen to avoid, I’ve had demos in the past & seen them a couple of times & found their music retrogressive & dull heavy rock, sort of stuck in a bad time warp. So when they opened up with Cradle To The Grave with gutsy vocals & full on sound with a 21st century feel, I thought; ‘Fuck me! What’s happened?!’

By song 2 they were close to knocking me out until I steadied myself & realised I was feeling euphoric after expecting the 80’s throwback stuff. Having for so long been the band from the land that time forgot, Kobe have dusted down the duvet & got bang up to date.

Talking of the land that time forgot it was exactly like that on the drive in as we went through the tunnels leaving behind bright spring sunshine to emerge in a strange yellow-grey atmosphere, half expecting to see some kind of prehistoric monster rise out of the Menai Straits & devour some poor souls in a dug-out canoe. We were almost right, for in Hendre Hall some of the kids were so small in height that they took part in a Mosh Pit Hobbit Fight, & the kid with the afro that looked like an 8 year Michael Jackson won the scrap. 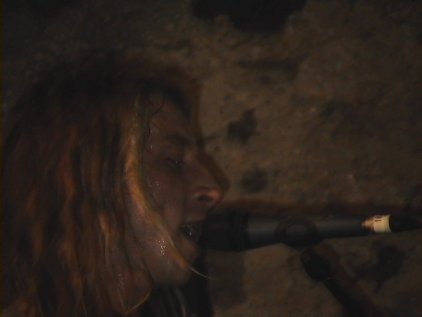 Marcus Peachey’s calamitous posture approached us, he was still looking for Andy Fatman to retribute the ‘cunt’ remark made last year. He told us the band are moving to London in July as a lot of ambitious groups do. How many groups take magic mushrooms then try to drive out of London as did Valleum I do not know! But that’s what Marcus told us; ‘Yeah it was really freaky, we were in the traffic, panicking, with nowhere to stop.’

Gogz surprised me in the fact that they’re still going, as usually you’ll get a band who make a big push as they did a couple of years ago & they’ll split if it doesn’t come off (see Pocket Venus). But with a new LP released the earlier indie stuff has gone & is replaced with a harder more Hendrix punk-funk feel. The 1964 Beatles haircuts & postures along with this new sound means they’ve been watching the right pop videos & they’re a complete contrast to the timid youngsters I saw at the Breeding Ground many moons ago.

Marcus was almost awestruck by the prescence of one time Anhrefn bassist Rhys Mwyn; ‘He told me about 5 years ago our songs were shit, it nearly killed me, but that’s life man!’

Rhys Mwyn – the Godfather of Cool Cymru was here to see the band he once managed & obviously still has a soft spot for Gogz (a bog in Malltraeth!). He’s taking them over to France this month which’ll be good fun I’m sure. Whether he suggested they sold their new CD for £10 at gigs I dunno, but c’mon lads, in this ‘music for nothing’ day & age you can’t say yes to another excess. Sell it for a fiver & sell double the amount. Otherwise Sync will buy a copy & put all the tracks on WinMX & Napster! The song Angels Flying did prompt Sync to say ‘its all gone shit Neil’ as Gogz serenaded into their rock ballad. Welsh language songs were very sparse & their fast version of The Knack’s My Sharona would’ve been far more novel in Welsh & maybe their attempt at The Who’s Squeezebox.

Marcus was eager to get Valleum tuned up & on stage; ‘We have a very young following, mainly girls.’ When I suggested he was a perv he replied; ‘Yes, maybe I should take advantage of them.’ It is almost hero worship as when he went for his pre-gig dump he could hear kids outside saying; ‘Hey Marcus is in there having a shit.’

He is a superb frontman, I don’t even think he tries, he’s just naturally fucking odd! Add the lyric “She has a picture of you in her colouring book, & she colours it in with her period blood” & maybe you’ll catch my drift. Even a broken string after 2 songs didn’t dampen spirits & the stage diving; where one girl hit the slate floor with her head, was soon underway again.

’How many of you have bought our CD?’ asks Marcus, a shoal of hands shoot up, ‘cheers, the money was spent on good drugs.’

I asked Steve to liken Valleum’s music to another band, his non-reply confirmed my thoughts that they are in a league of their own, its not punk, its not rock, its not indie – oh bollocks to it, who needs genres anyway? Like their song about Palestine, it kind of slams it all home; who needs countries anyway? Who needs religion? You fucking wankers, killing each other for beliefs, for Gods that don’t exist, its all shite – God, Jesus, Allah, Mohammed – fuck off the lot of you with your oppressive fucking shite & leave us live in peace.

Shit! Did Valleum induce me to write that!

Ending with “Legalise knives, spliffs, bongs,” I think you know where Valleum are coming from.