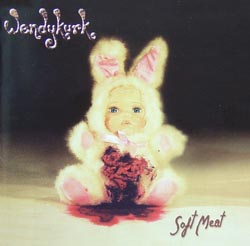 Extreme rockers WENDYKURK are about to release their debut album for Ankst Musik Records. SOFT MEAT will be in the shops in September through Shellshock Distribution. The album’s six tracks were recorded over an intense three day recording period at the magical Bryn Derwen studio with engineer and producer David Wrench. Already the band have become notorious in Wales for their visceral live performances, outlandish appearance, youthful anger and for just scaring the shit out of most people who see their extraordinary live shows.
Make no mistake WENDYKURK are a very special band. Formed in Holyhead at the beginning of the new millenium the band have refined their musical style to create something altogether new and exciting. SOFT MEAT is a brutal and unrelenting album containing some truly breathtaking rock music. From the ‘fuck you’ manifesto in screaming that is Violet Introspection and the incredibly brutal Dogbones, to the poppy and commercial Sometimes and Freckles nestling next to the epic rock swagger of Aurora and Chain Of Daisies. The whole album is dynamic and challenging with singer Nomi’s extraordinary vocals carrying all before her. The band have recorded BBC Radio 1 sessions and have been featured recently on the newly created underground music satellite music station ORG TV (the promo video for Freckles), they are being featured in ROCKSOUND and generally they are being hailed as one of the most vital of the new breed of UK rock bands making an impact in 2003.