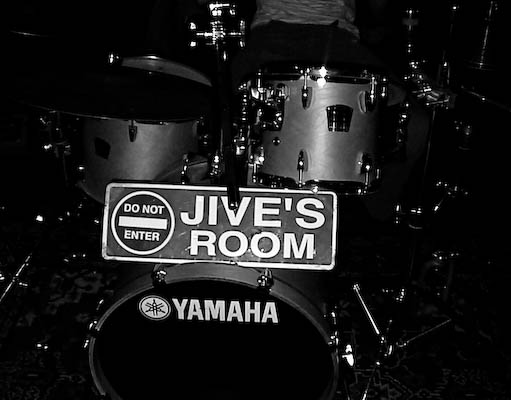 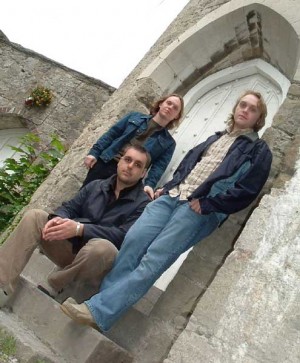 How many people? The hot, sweaty, sticky night was increased ten-fold by the biggest audience yet at Bar Blu. I guesstimate probably around 350 turned up to swap sweat with each other & we were even graced with the presence of Fairziff & Wayne The Bastard making their Blu debuts on this Wednesday night regular.

Jives Room opened proceedings on this repeat of that successful night in June when the same bands played on the bill. That night Jives Room stole the show & I thought they should have headlined this time; particularly after their guitar smashing exploits of a few weeks ago. Maybe they felt the same, as that spark was missing from their set. Don’t get me wrong, they were well received, there were people mouthing the words, I recognised the songs & their bastard version of You Spin Me Round (Like a Record) had the odd babe or two jigging their bits about in front of me, for which I am eternally grateful. But there was an edge lacking tonight, maybe from the PA being on full volume but still too quiet or from the band being in a bad mood. I couldn’t get any volunteers to review this night as you do set yourself up for a public flogging as I did the last time.

Junebug (pic above) as last time headlined the show & are well respected amongst the fraternity. This respect does astound me, having been brought up in a scene where every band hated each other as a potential rival & would merrily slag each other off. This of course still goes on, The Cox are quite often the targets of jealous anonymous hate campaigns & X-Ell find themselves quite literally shunned from the scene. These are not for me to comment on, I love everyone! And if I haven’t reviewed a band at a gig I was at it’s down to one of two things; I was too pissed to remember the show and/or I couldn’t get anything positive out of the set & rather than give them an absolute slating it’s best to ignore them. Fucking hell! I still have to walk down the street!

Anyway, I digress, Junebug – the respect they command comes from the younger non-punk bands in the area, & you see those bands & their followers singing along as the brothers blast out their indie-go-lucky repertoire. But they don’t quite do it for me, put a band behind them, then yes, you’d have the business, but it’s all a little too pub cabaret in the set up for a gig going band. Yes, ‘have band, will travel’ makes gigging a breeze, but a drumkit would make the world of difference to those deft tunes.

I saved Gintis ’til last, they were the middle band of tonight’s three & I’ve not seen an audience arced around the band within a metre from them at this venue. The place was heaving as the beads of sweat rolled off my face & into my pint glass (I thought my cider was salty) & a raised stage would not go amiss. The public flogging I previously mentioned was for my comments on this band & actually came from themselves, although the review wasn’t that bad, it wasn’t glowing & they took offence. Had they not improved from last time I would’ve really got stuck into them as its been 2 months since that last altercation. The only sticking in I wanted to do after watching Gintis tonight was with them in the studio (oh, & my dick into Andy Fatman’s pint). Although not entirely blowing me away, there is that feeling of something in the air with this band, it’s different, it’s diverse to the point where even Gorky’s Zygotic Mynci would throw the towel in & say, ‘Hey lads, please take our pedestal.’ We have a string of emotions & influences, Gintis are like laboratory rats fed on a cocktail of psychedelic drugs who have escaped to set up a commune in a nuclear power station. They are Captain Beefheart on asparagus with a drummer who looks like one of the original cast of Grange Hill. They have a set that ranges from something you’d find hanging from the ceiling at Rhuddlan Folk Club to a cutting room tape discarded at Abbey Road Studios after The Beatles had been in there. Their singer, guitarist, keyboard player Carl Gintis has an air of confidence about him (probably down to his Dad’s shirt he was wearing) that would no doubt increase if they played a couple of their songs a key higher to match his vocal range. But the real jewel in the crown is the guitarist (is it Ste Gintis?) who has envious qualities when it comes to making his instrument cry. You do sometimes want them to thrash out just one raucous number, but that’s OK, they do it right, you nod, you appreciate, you want more.

Fuck me! I’ll be wanting their autographs next…