Blu technical hitch of the week – No lights on stage. 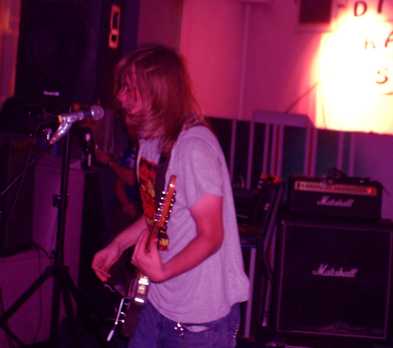 Did you see the newspapers this morning? What a headline, eh! FATMAN IN THREE PINT SHOCKER. It’s true folks & I was witness to it, at one stage the big fella didn’t even have a glass in his hand. Shocking. Was it down to the fact he was skint or because the Guinness took an age to pour? It took so long that I raised a family with the barmaid while she served me.
‘These are absolute rubbish,’ exclaimed a sober Fatman half way through My Band is Bigger Than Your Band, ‘and you can print my real name, full address & telephone number next to the quote.’ Such was the conviction of the boy.
He did have a point, if you turn up at a venue to play a practice set with a drum machine then you do set yourself up to be shot down in flames. I suppose the pun is in the title as there are only 2 of them & that drum machine – arrgh.. fuckin’ drum machines!! This pair are great musicians, both bassist & guitarist know their stuff in an industrial-metal performance, but where’s the rest of the band? Where’s the singer, where’s the fuckin’ drummer!? Please find some cos you’d be very good with them.

Is that the guitarist from Mwsog I see playing with Jives Room? (pic bottom of page) I can’t be sure but he does bare a resemblance, I thought his addition (if it is he) would’ve added a more psychedelic-avante-garde approach to the Jives Room sound, but maybe its too early for him to exert any influence. What he has done is added a heavier feel to the band’s sound as this was a more no nonsense approach with a fuller sound, less arsing around & evidence of serious rehearsing. The Kings of Leon cover aside (please do a Kylie one next time), Jives Room show that unlike their contemporaries Gintis, whose set consists of incidental sounds roughly thrown together in the form of a song, they can seriously rock and roll, & do so with complete confidence.
The only thing that does let them & all the other bands down is (and total disrespect here) the karaoke PA. Yet bands are queuing to play here at Blu & people queue to get in to see them.

The phenomenon that is Carpet (pic top page) was never going to be full on at these volume levels, although my ears are in pain again, yes yes it is my 5th gig in 7 days. How long have they been going? You’d expect Carpet to be in their 30s by now they’ve been around that long, but I’m over 10 years out on that one. While others have hung up their guitars to raise families, Carpet have stuck to their guns & principles without firing blanks. A set of new material shows a more mature sound that hasn’t lost that edge, just more thought out. And what John Morris can do to a guitar most of his contemporaries can only dream of.

There are bands that desperately need a ‘Get out of Rhyl’ card quick, otherwise you end up throwing a 2 and a 3, & landing on the ‘Go Straight To Rhyl’ square. ‘Do Not Pass The Sky Tower & Do Not Collect Your Giro Cheque’ – Carpet are one of them along with Fudged – it’s great for them to try out new stuff on the local populace & its great to see them again but with so many upstarts crawling up the hill (Jives Room, Gintis, Kneejerk, The Cox, The Hollow, Alien Matter, Out of Use, Model Superb, Flea Cirkus, L98) the local hero mantle won’t last forever. But these type of gigs should be like hot water bottles, use them to warm you up but don’t rely on them for if they don’t burst, they’ll certainly cool down.
The name Carpet needs to be seen in the back pages of the music press, to coin a Clash lyric; ‘getting their names in the small print on the poster’, supporting the latest fad out of London, for you know that Carpet & all the others mentioned are more than capable of holding their own in the limelight, but the limelight won’t come to them, they have to find it.
North Wales could easily become the next Seattle or Newport or whatever & I’ve got a feeling in my water that this could come true. We have this website (cue trumpets) as a superb medium of communication & information for locals & outsiders (hey L2W was even featured in The Independent!!). We have some excellent bands of all genres, we have a champion for our cause in Adam Walton’s Radio Wales Show every Sunday night (9 til 12), the local press are happy to put in print what they read off this site. In The Dudley, Blu, Old Hall & Hendre Hall we have great venues & outside bands are happy to come here & get a good response. It’s all self contained & pretty healthy, but we do need to break out, to farm the better bands off to the mainstream, or the UK underground movement at least. I have threatened to do a compilation CD of the best of the area’s talent & I will do once I’ve got my head round the sheer enormity & expense in time & money of the task (providing the bands don’t mind NOT getting paid, & don’t complain as I bask in the Mediterranean sun!) 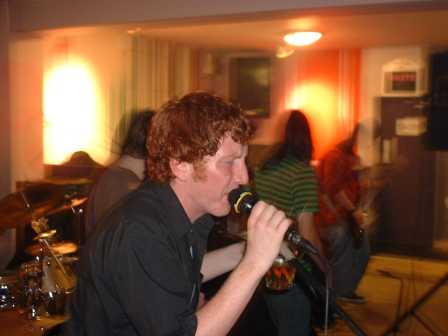