Hope and Anchor, Islington (with Death by Visitation of God, Hyperfury) 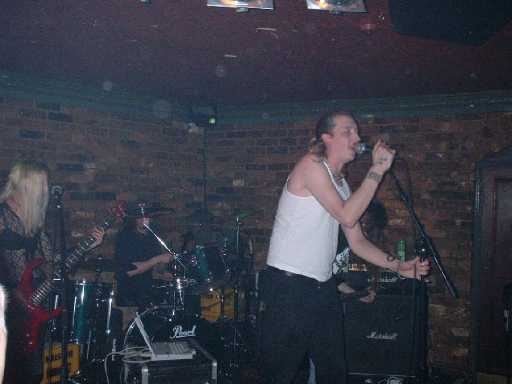 A short sharp shock to the system, a few dates strung together to build the stamina for all those forthcoming world tours, well, Belgium for starters.

After working down in Bracknell for the day I trekked into the City to catch up with the band. It’s not like I haven’t been there before but you obviously need about 10 years worth of driving experience there to gain “the knowledge” of how to get to places (when you’ve forgotten yer A to Z). It’s impossible to drive in relatively straight lines and they just don’t believe in sufficient road markings and signs like what us country folk are used to. Have to write to Ken Livingston to see if he’s going to make an exception to the congestion charge for fuckwits who are in and out of the zone despite not needing to be there. Anyway, made it.

Dead Pad (was looking forward to their singer) had pulled out so Skinflick were first up. Pleased to see the Misery Machine Mark 2 had survived the journey and got them there. It’s not a big place in the cellar there, but was pretty rammed full. A short set of the “hits”, kicking off with “proper” new release “Two Ton Loser”, is met with fervent applause. This themed industrial night has obviously drawn out the followers of the cult, these folks know what they want and are pleased with how it’s delivered. Lots of interest which should boost numbers for March 31st gig at 93 Feet East

I took a break upstairs to have a natter with Rebecca and Dewi, North Walians happily exiled in the smoke and playing in Science. Beca was concerned she wouldn’t recognise me as I may have become a fatter, shorter, skinhead…err, no. We reminisced on perspectives on Wales from afar, whether it was the people or the place you missed, and the contrast of great little bands in the middle of nowhere with great little bands in the middle of everywhere. They have new tracks coming out soon, and hope to have an expedition “home”, maybe to play at Hendre Hall.

So missed most of Death By Visitation of God., but what I did hear was pretty impressive, “an industrial Sepultura”, no doubt influenced by being 2 thirds Brazilian. But a lot more melody in the vocals, plus some general weirdness. Ending with some double bass drumming (from machine) to die for, they also were warmly received and deservedly so, sound people.

Which only left self confessed “born celebrities” and “the most psycho band here” Hyperfury to finish. And they did finish off quite a few people, crowd becoming more sparse in the face of their chaotic (sloppy) onslaught, marginally improved by remembering to switch their backing track on after a bit. Pretty two dimensional hate machine featuring not much fury more hype. Covers of Cure’s “boys don’t cry” (brings a tear to the eye) and NiN “Wish” (you’d go home).

Next the Talbot in Stoke, local support Defiance bringing some local support in. They were heavy metallic hardcore, recently added extra guitar increasing the rumbling power. Early days for the band (4th gig) but good elements in there, including strong vocals well backed up. More variety in their riffs and structures would help though

Still received better reception than Skinflick, which kind of confirmed thoughts on “scenes” in general. They don’t play stripped down nu-metal, there is depth and time taken in build up that maybe requires patience that for some weaned on distorted one-riff wonders lacks immediacy and impact. You either get it or you don’t. Great to hear first live airing of title track of next mini LP “Halo of Flies”, all threatening keyboards and twisted notes to start before kicking into one of the best fast riffs they’ve done, metal, man.

JB’s in Dudley, fantastic rock stylee venue, with the band playing in an industrial/goth side section to the metal disco main hall. The place is entirely geared to heavy music, a pleasure to play here. Tremendous PA sound and engineered by a guy who was off to the Far East to work for Andrew W.K. next. Plenty of smoke, lights and atmosphere, another half hour set drags some 20 or 30 of the 200 in the main hall to see, but there you go, stick to what you know, be different like all the others being different in exactly the same way. A lot of justified respect for Duncan’s innovative guitar work, only he knows what’s going on with his pedals. And good to see Steve’s “full” drum kit getting a thorough beating. There’s entertainment of a kind after for the observer of people getting down to the most metal MC Hammer(?) and then back on the bus, to continue searching out those looking for something different. No compromise.

By the way, fuck the troops to hell.