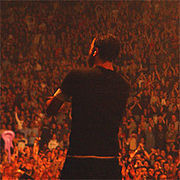 One Marshall amp! The type you get behind a pub rock band when they’re playing to their mates & the bar staff. Just one amp for Matt Bellamy’s guitar to scream out to so he can fill this enormous arena. With your AC/DC’s & Darknesses stood in front of a wall of amplifiers, Muse just go to show you if you have a good sound crew & a great set up you only need the one amp, leaving you plenty of space on stage to run round like a 7 year old boy at a mate’s birthday party, but we’ll get to that later.

I hate being ripped off & I’m not that fond of Manchester, for both footballing & town planner reasons. So when you see a sign ‘Arena Parking’ & a bloke urging you in, you flash the worst case scenario of not getting a parking slot & arriving late to the gig & swerve into the car park & pay your fiver. So when you realise you’ve just walked over a mile in the rain to the Arena, passing ample parking spaces & other car parks charging £3 you start spitting ‘Bastards!’ everywhere. Bastards!, Manc Bastards!

Kinesis were the surprise package of the evening, only cos we didn’t realise they were playing. It was almost a homecoming for them having played here 8 days earlier as support to Linkin Park. Something tells me they have a very good manager, good record company or know which arses to park their tongues in as to play a place this huge in the space of a week is a pretty mean feat! Granted yes the arena was a little over half full this early on but they still barked out their own guitar driven licks to about 7,000 people.
That’s one thing that did concern us before tonight, the size of this venue, would Muse fill it or would we ducking as the echoes came bouncing at us off the back wall. There was no need for concern as there were 19,000 like minded people waiting to see the phenomenon that has become Muse.
Kinesis battled with a sound not set up for them, but coped, giving an excited performance, although we did seem a little detached up in the posh seats. There was a hardcore following in the middle of the swollen mass who pogoed to Zyklon B, And They Obey & other stuff off their Bullets LP while the rest of us looked on.

The rip off anger resurfaced when I paid £6 for 2 bottles of warm Carlsberg, ok I didn’t have to buy them & I could’ve paid £1.60 for a bottle of coke instead (which I did later anyway). I conveyed my dismay to Debbie Dangerous for she was there. It’s a known fact that you can be amongst 19,000 people 65 miles from home & always bump into Debbie Dangerous!
I looked forward to seeing Elbow & have given their Asleep In The Back LP a couple of spins over last couple of days, recalling what a fine album it is, & the performance has inspired me to seek out their latest LP. The thing with Elbow, it is mainly chill out stuff, I actually drifted off earlier today while LP was playing, hence the title, well, Asleep on The Couch anyway, so to keep the attention of this huge crowd during their more tender moments was always going to be a difficult task. A task they were doomed to unachieve as you could hear the hum of thousands of conversations above the quieter stuff. Probably knowing this anyway Elbow stuck to the 1st LP bar 2 songs (I think) & it was all over in 35 minutes. Did the drummer have a comb-over? Anyway, really enjoyed the set even if Any Day Now was left out.

The cluttered stage having had 3 drum kits on it at one point was now clear to leave a vast area in front of a drum roster, a keyboard roster & an even higher bass roster! And of course Matt’s Marshall amp. The community spirit hit a high note as the seated audience participated in a perpertual mexican wave to be applauded by those standing, a sight & experience worth the entrance fee alone. It soon stopped as the lights went down & like every audience since time began we fervoursly cheers the man who flicked the switch!
Kicking off with the awesome Apocalypse left us open mouthed! This is a far cry from dirty punk rock bands at the Dudley in Rhyl, & had anyone else put on a show of such proportions they’d have been slated for being pomp. There’s nothing pomp about this band, just sheer intensity as Hysteria broke out amongst the swathing masses below us, crowd surfers whether voluntary or not skimming the hairlines of people as they hit the bouncers at the front to receive a stern warning. The meatmen in yellow security shirts were on to a loser in a one sided battle as body after body was hurled towards them. New Born kicks in & the crowd kicks off even more, this wasn’t a mosh pit, it was a mosh arena The sound is overwhelming, the sound desk had saved the volume overdrive button for Muse as their sonic bliss filled every nook & crannie of this impressive arena. Was he classically trained as a guitarist & pianist? Not arf. Had they put wheels on the pyramid like keyboards & Matt worn a silver suit with fuck-off collars this could’ve been a prog-rock (at its worst) revival concert, but even the Close Encounters style lights at the front of the keyboard rostrum do not deter from the style & grace of the musicianship here. Muse are a band apart from all their peers, I correct myself, they have no peers, if they were hairdressers they’d call themselves ‘A Cut Above The Rest’ for that is what they are, ‘a cut above the best’ is perhaps even more apt.
Micro Cuts takes us into a chill out phase, what a song! The Pink Floydy bit brings down a back projection of moving clouds of all colours & makes me think where do Muse go next? Will they disappear or will they become the next Pink Floyd, will they hate me for even suggesting such a thing? Thoughts of A Dying & Citizen Outraged continue the manic piano playing with video shots from all angles hitting the back & side screens. Space Dementia is followed by the enchanting Endlessly as the lighters & mobile phones flickered across the expanse.
Manchester’s town planners hate the Welsh, I cemented this bug bear after driving past the rip-off car park half an hour after we had left it. Everytime I try to leave this city I always end up in the centre or down the curry mile or on the way to Sheffield! There are no signs pointing home! So much so that we ended up going home on the M62, & with the M6 junction closed had to cut through Warrington to get on the home stretch. Normally I’d’ve been a little irate by now, but with Feeling Good, Butterflies, Sunburn etc still buzzing in my ears I was in a joyous mood – ‘Hey, look a 4 mile traffic jam’ No problem, ‘Oh a puncture’, ah well, ‘Oh damn the car’s just blown up’ Never mind, lets get the bus.
With a couple of hundred black balloons falling from the ceiling to play with we knew that Time Is Running Out & hearing everyone sing & stand to Plug In Baby, the show of epic proportions drew to a close. There was time for 2 more & Blackout & Stockholm Syndrome brought in 10 enormous & heavy bouncing balloons that wobbled across the audience to be burst by cigarette lighters, leaving the assailants covered in white ticker-tape. Even the band contributed by bursting an errant balloon on stage, leaving it white. We climaxed (yes, we did come) with a huge spurt of white ticker-tape blasting over the crowd like a white out snow storm of epic proportions.
On the way to the venue the man giving us directions asked what band we were going to see, on telling him, he replied, ‘Who?’ in a sarcastic kind of ‘I know who Queen are’ kinda way. And that’s what Muse are about, they’re an exclusive band & we were a highly honoured & exclusive audience.

Thoughts of a Dying Atheist

Time Is Running Out