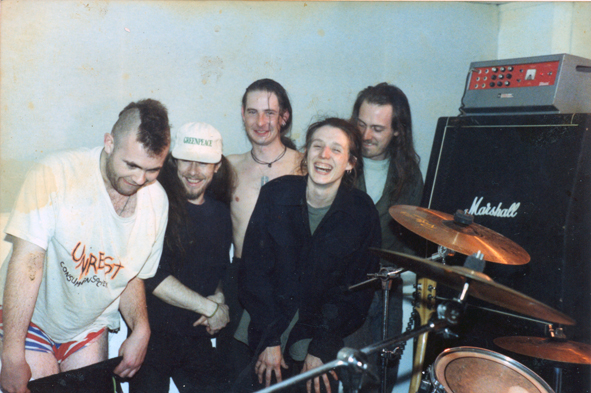 Other members were draughted in whenever necessary – due to absences, jail sentences, or general drug over-frenzies, incl Ian (drms), Sven (voc), Mike (drms). Longest lasting format was Andy Killian, Marc McDermott, Baz Clarke, Fat John (Collins) and Jackie Swanson, lasting around 7-8 years before Phil Irving replaced Andy for around 3 years. Gobba (Mark Graham) filled Fatty’s boots for 18 months before Phil joined. The same long lasting format was also called Radio Mongolia when Bone sang and played guitars instead of Marc, and I played guitars for the last 6, although they can’t really remember clearly – as anyone who saw them ever should know why. They had often consumed more chemicals than the rest of the squat or nightclub put together, making details a little sketchy. Phil once drank 72 cans of lager before a recording session in a studio. The band had done the equivalent in other chemical forms. Memorable gigs incl the ‘Night Of The Purple Ohms Gig’ in the Toxteth squat, the gigs in Holly House (jesus! anyone remember them? anyone for some more punch? ho ho), Trecastle and Portsmouth festivals, where they were possibly tripping more than ever before, May Days in Sefton Park (lpool), the annual punks’ picnics in Hulme (Manchester), the Dolehouse squat in London, the Sunnyside gig in Toxteth which trashed a house & was subsequently demolished, oh and the ‘Night Of The Gore’ halloween gig in some house in Liverpool where they had fantastic gore makeup on that was so convincing Marc even shat myself at one point when he saw himself in the mirror after wondering why so many people were running away from him!

So where are they now? Don’t know about Viki or Shreddy. Bone is in Amsterdam doing live events, p.a.’s etc, and Marc’s currently working on a new project which they’re quietly quite excited about. Anyone who liked Mongolia will like this new updated experience. Gobba plays gigs in lpool under the name “Gobba And The Monsters From The Id”. He also does p.a.’s. Jackie runs a healing event in lpool which brings together loads of different styles of healers under one roof and which undercuts the market by a significant amount. She also does physical performance art and numerous other things. Andy disappeared – ru out there andy? Toe and Phil are living a life of leisure in lpool. Fatty lives in Spain in the Southern Alps, where he grows olive trees and is generally as debauched as ever in the most beautiful way. Baz is a director/producer of extreme sports TV programs which you may have seen on Ch4, including UK Streetluge and Muay Thai competitions. Marc makes films and works as a freelance camera operator and editor, recent stuff included an anti war video shown at the Stop The War Rally and other places – available for download at www.firewhorl.com (called Mantra For The Man) – made with Andy Stevenson (ex Terrajacks). Marc has a new band called Mojo Storm
(Contributers: Marc McDermott (27.09.03)