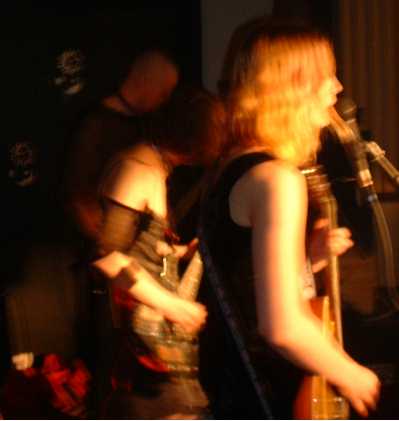 Steve Rastin reviewed a 4Q gig 15½ years ago & complained that for £2 he got 4 bands & only just got his money’s worth. One & a half decades later inflation has doubled the entry fee & I was on the verge of thinking the same thing.

Travelling to Bangor in the Crudmobile we had to put up with a euphoric Steve Sync gushing about the Alien Matter session recorded the night before for Adam Walton’s show. Fatman said it was like listening to Paul Hammond when he first formed PSST all over again!

We picked up Wayne The Bastard from his Colwyn Bay greenhouse who provided us with more herbs (see last 2 live reviews) then teamed up with our friend from the Super Furry Animals & took on some cheap lager at a place where a decent rig would make it an excellent venue.

Bangor has never done things conventionally, outside the University the populace are left to themselves to organise shows and they do so with interesting results. You’ll get reggae bands playing with indie kids, indie kids playing with R’n’B divas, R’nB divas playing with thrash metallers. Tonight we had a blues-fusion outfit The Raven headed by a middle-aged geezer with a clarinet sporting a Napalm Death sweatshirt. Its that kinda place.

Our SFA friend was being badgered by people all night, so he put on a scouse accent & refused to be drawn on his identity. This left us in peace to beg the question, why? Why put on a chill out band playing Jimi Hendrix riffs with a digeridoo & piercingly loud undistorted guitar at 9.30 in the evening? Had I turned up at Wayne’s house at 2am, partook in a joint of his wild lavender & this band were playing, then I’d’ve parked my arse & bushed out with them; but not on a night like this please! They were an hour late due to technical difficulties (the bass player hadn’t turned up on time!) & the soundman loved to hear feedback. (Am I moaning?).

A very long wait meant we had to hear Steve talking about the Alien Matter session again, which to be fair to him is nothing short of brilliant & you’ll hear it soon on Radio Wales. Some other band didn’t show up & a scan across the audience lit up Ann Flaps, Alan Holmes & drummer from Ectogram, who got up for an improvised and painful 3 song set using the main band’s unusually tuned instruments. Ectogram are not here to please you, they’re not gonna be playing any Green Day for the kids, they’re gonna (& did) fry your brain with dischordant melodies that’ll have the mums in the audience (& Wayne) shaking their heads in disbelief. Fatman described them as a B-side My Bloody Valentine, where you’re urging them to kick into a ‘proper’ song. Of course, the proper song just doesn’t happen, & that’s what Ectogram are all about. I just can’t believe its not reggae. 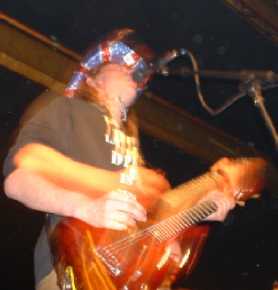 Valleum on the other hand are very song-orientated, they have a mission and are on course to accomplish it with power chords, vibrant heavy tunes & a large & very young following. They are talked about a lot & highly regarded in these parts & what let them down was too many bands on the bill. Had it been Wendykurk & Valleum, or Valleum & Ectogram then we’d have had a top night & I’d have less to write! Fatman, a man of many adjectives asked me to say that Valleum’s singer with the longer hair looked like a cunt in that hat!

Not going on ‘til 11.30pm with the kids on a curfew & the shutters of the bar pulled down was not the time to be playing, & whatever Wendykurk’s vices may be, it could be said that they’d consumed too much of it by now & plodded through the motions. You had to feel for them really, as it was their gig & they were left carrying the can through probably no fault of their own. They played fuck with me when I called them doom-metal on the link2wales site & they were right to for theirs is an avant-garde metal which, under the right circumstances would be enthralling. Visualisation gets top marks with drummer, Nos coming top of that chart looking like a prop from an Alien Sex Fiend gig, quickly followed by singer Nomi in her jackboots, velvet dress and voice that could grate onions at 20 paces. Steve Sync raised the biggest smile later when he suggested he fancied the guitarist with black hair & was shocked to learn she was a he in a dress & laddered stockings. Well, if you’re reading this Matt, we can always set you up with Steve, he’s a good lover. 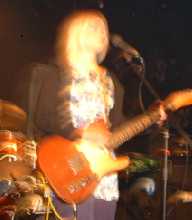 Ann’s in a flap