From the raucous to the sublime – it’s been a contrasting weekend. A punk rock onslaught on Friday night, that 24 hour sickness bug on Saturday & the elevation of Perfectly Flawed on this cold Sunday evening. 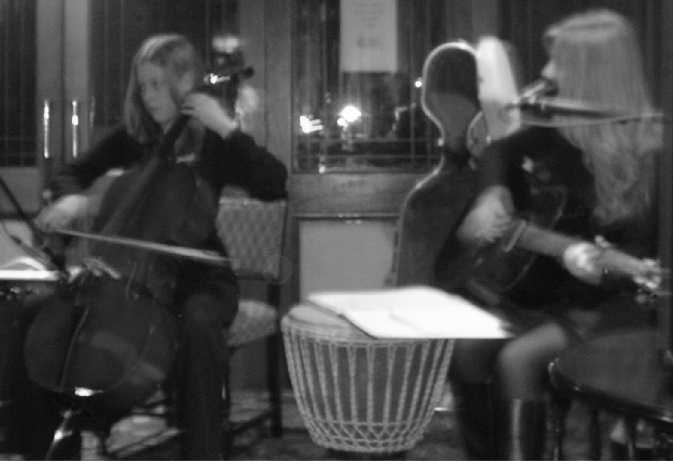 A two, occasionally 3 piece acoustic outfit making their début in unusual surroundings, ie. The Royal in Colwyn Bay; still, they got £80 for it, even if the landlord made them play an extra half an hour at the end.
As mentioned in my last review, bands are seeking out new venues to ply their trade & it’s important to do so, important to do these low key affairs for practice does make you perfect (even if you’re flawed). So a Sunday in the Royal is bordering on the bizarre; you have a large support of family & friends on one side (incl; local band Red Shift) & the regular dead heads on the other.

Perfectly Flawed (Floored would have been an even cleverer play on words) are a cellist & singer/guitarist, both are two young blondes clad in black (what more could you ask for!).
The set was peppered with Only Happy When it Rains type covers & Wayne sought solace with God when a version of The Cranberries’ Linger was played, but my heart melted for it is one of the 200 songs in my All Time Top Ten.
In between the pepper we had the sugar of their own material, well written & well played & I pictured these girls with a drummer & a bassist backing them, blasting out an electric set of noise. It is what the area lacks – an all girl band, or grrl band. I think Daisy Soup from Rhyl about 10 years ago were the last to do it, albeit briefly.
We have had a similar ilk to Perfectly Flawed in Beth, Emily Gresham & Sarah Davies strumming acoustically as warm ups & at festivals, plus we’ve had girls in punk-indie bands like Aubyn Dyke (Psycho Sexual Sex Terrestrials), Jackie (Platonic), Ann Matthews (Y Fflaps) & Chrissy (Fluff), but not an all girl line up which would be unique to the area, & if the talent of Perfectly Flawed are anything to go by, also an asset.