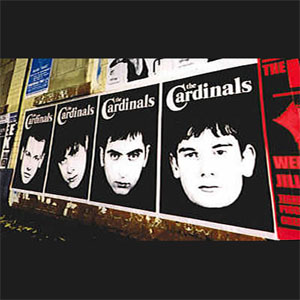 Breeding Ground #2 kicks off with an expected lower attendance mainly on the strength of #1’s line up. There was still plenty of punters present to warrant a successful evening. This venue is essential to the future of the North Wales scene; everything about it has ‘alternative’ stamped on it; the bands, the music, the organisers, the crowds, the taste of the beer!

You’re unlikely to hear The Whole of The Moon played in-between bands; you could request it via thebreedingground.com website. But this is 2001 & the whole of the moon era is old hat (most of the kids here would struggle to tell you who sang it, who locally was involved in writing it & who also locally played it to death at which night-club). No, the kids are alright & the kids wanna listen to the new punk, the new alternative, the new underground – a look at DJ Paul Hammond’s playlist is tantamount to that; Do Ya Think I’m Sexy – The Revolting Cocks (nuff said).

Sulphur have come in for a fair amount of criticism from both camps in the local press & it’s apparent that when they get their punk rock right they do it really well. It’s the twiddly bits in-between these gems that let them down, those bits that are screaming out for a 2nd guitarist. I’m an advocate for ‘forests of guitar players’ as Mark Radcliffe once described the Sons of Selina line up, I like to feel that power, the sound of guitars throbbing in my head. OK, as a 3-piece you get a bigger personal share of whatever promoters pay bands these days, but unless you have the guitar skills of a maestro (not the shite car), your music is going to suffer. The Cardinals & Grasshopper both got that bit right with 2 guitars per line up & Grasshopper threw in keyboards & percussion to great effect.

The Cardinals hail from Manchester but I forgive them, I even forgive the Manc style on stage dancing as they produced a slick set of indie music meets shades of Pink Floyd (I suppose). A muted response from the audience was expected as Rhyl slowly gets to grips with quality outsiders playing on their turf. It gives them a chance for a breather as they come to terms with appreciation rather than local hero worship. The Cardinals gave us a wonderful finale in the dynamic mould of Stone Roses’ I Am The Resurrection, nothing like the tune but structurally on a par with it, superb enough to even stop Martin Trehearn (Bistro guru) in mid-sentence (slurred).

Grasshopper are Ocean Rane reborn, but unlike the poppy tunes which destined the band to remain in day jobs, Grasshopper have a real bite to their set, tighter than your backside in a Turkish bath (apart from that awful tune sang by keyboardist Rob Ireland which left my anus flapping in the wind). I remember seeing Ocean Rane as a schoolboy outfit on the Rhyl bandstand in 1985, they were supporting The Storm & looked nervous as any 14/15 year olds would. Sixteen years on & the nerves have long gone, replaced by a strong confident presence, these guys are not going through the motions, there is a real zest in their songs & they seem to have plenty of tunes left in the tank. Look forward to hearing something recorded.

The forthcoming events at the Breeding Ground have the mouth watering in anticipation, check out their website for the line-ups, playlists & more. The future’s bright & we’re all breeding.