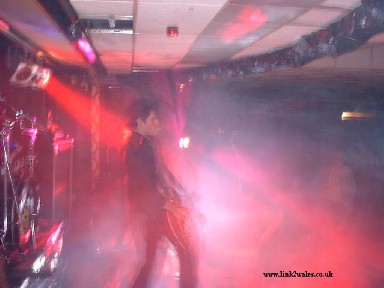 Dubbed the Xmas Special we were offered a platter of punk rock to take us toward the celebration of the birth of our lord Jesus Crud. Even the bar management were feeling festive & added bubbles to the lager. So having 4 hours earlier subjected our battered eardrums to a force 10 gale by Pocket Venus in Chester, myself & Fatman braved the bitter weather & trudged up to the Breeding Ground. So cold was the wind that I could tap someone on the shoulder with my nipples from across the road.

Solo Ed warmed the cockles of the cold hearts inside as we arrived with his acoustic set as I tried to come to terms with the fact that I’d drunkenly agreed to do a spot of DJ-ing & forgot to put up a ‘No Requests’ sign.

Having reviewed Carpet no less than 5 times this year I’m in danger of becoming their biographer so there is little else I can write about them that hasn’t already been said, unless I start getting smashed with them & also turn up late to go on stage. It took most of their set for the YTS sound engineer to suss Carpet’s level but they, as always carried on regardless & with little fuss.

There is also little I can add to the Fudged review that I did at the MASE headliner a couple of months ago. Steve Allen Jones [local post-punk star] didn’t get it & questioned what was the fuss about a band playing covers, I did explain that they did have 2 or 3 mean & nasty tunes of their own. Add another 2 or 3 more & you’ve got yourself a mean & nasty set, which hopefully will happen over the next year.

You could almost imagine the setting; Carbonari are stood next to Matthew Kelly & they say: ‘Tonight Matthew we’re going to be the Black Swans.’ They then walk up to the doorway, turn, smile & wave to the crowd & re-emerge from the smoke & dry ice as the finished article. Gone is the polite thank you in between songs, gone is the timidity & in their place we get an uncompromising complete in-yer-face, ballsy, gutsy performance. The makeover worked, they look the part, they sound the part, & they are the part. Far too loud for the venue as Mike Deaf Jones was at the controls but this was like taking your Ford Escort for an MOT & the mechanics wheel back an E-Type Jag; it’s still a car but it looks slicker, sounds slicker & will turn far more heads as you cruise down the paradise mile. The Rastin said: ‘I hate them, they make me wannabe 16 again.’ Which is of course a compliment of the highest order. I too couldn’t fault them, they kicked the rock’n’roll butt ‘til it was red raw & hope this is the shape of things to come. Still haven’t found anyone who likes the new name though.