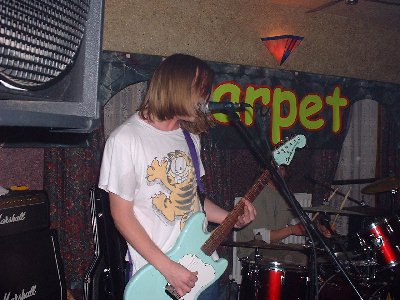 Carpet bombing, allied carpets, flying carpet, sticky carpet, axeminster & shagpile. There, with all the puns out of my system I can get on with the review. With the resurgence of the Breeding Ground next week we get a taste of what life is like without that venue, where bands have to eke out a local existence in pubs with a small PA & no lights. Not that there’s anything wrong with tonight’s set up, its just that we have been spoilt over the past year. So having seen Carpet in their full glory at TBG with all the lights & ear splitting volume, it was quite a come down to see them in the flesh in front of their mates. They do have a lot of mates; this small upstairs room was packed out.

Jamie Cardno (ex Fathead bass man), continuing the growing trend on the local scene, opened proceedings with an acoustic set. Displaying a fountain of talent perhaps slightly ahead of his peers (Beth, Mark Moonan, Solo Ed, Emily), a repertoire of country & western, Specials even Turning Japanese was strummed out with spunk (as they say in Aussie soaps). The perfect comedy moment occurred when a collector for Children In Need appeared between songs rattling his collection bucket. Jamie announced the man’s presence & burst into a punk rock blast screaming: ‘Fuck the kids.’
What will make the headlines in this week’s paper will be…
STEVE SYNC IN CHARITY DONATION SHOCKER
I know you find it hard to believe but it’s true as Fatman & myself witnessed Steve hand over ELEVEN whole English pence to the Children In Need charity. Steve is now convalescing in hospital after suffering from a sudden bout of severe depression brought on by the anxiety of parting with money.
Having laid the underlay (whoops! Slip of the pun) to their current status over the years as Nirvana-by-numbers, Carpet have grown into a well-respected & tight sub-punk-meets-oily-rag unit in the area. How far they stretch beyond the locality I do not know, as they’re not ones who thrive on publicity. If there’s a feature in the local rag it’s usually been sought by that paper rather than presented by the band. If there’s a gig, you’ll see a sudden flurry of posters & Internet activity then ‘bang’; they went as fast as they came.
This time they did leave some residue in the form of a debut CD, but had been left in the clutches of Simon Gardner who is a deft hand at drum & vocal sounds, has sadly forgot to concentrate on those wild guitars that make Carpet so infectious. That Gardner boy just doesn’t understand punk rock! All is not lost & don’t get me wrong; the CD is great, its just that for another £30 remix it would be fucking great. Which is what Carpet are, which is why I keep going to see them.