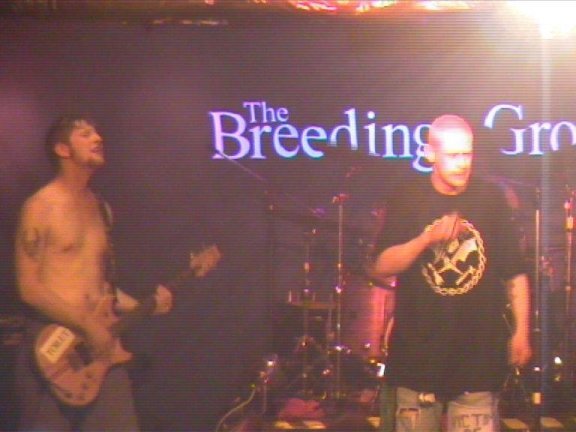 Where the fuck where you? Perhaps tucked up in bed after a day’s worth of celebrating Liverpool’s 2-0 mauling of Man Utd. This was probably the Breeding Ground’s lowest turnout, which was surprising considering the calibre of the bands. I have anticipated the return of a local band to this venue & even wondered what I could possibly write about when I had only scribed over them a couple of months earlier. The test of the local populace is about to be dipped into the alkaline as we start seeing repeat appearances, & if tonight is any indication then the litmus paper is not turning the right colour.

But it is still early days & perhaps the promoters need to be more active off line through the old fashioned medium of newspapers, record shops & fly posting (the council offices in Churton Rd is always a good place to start pasting).

I’ve said it once; I’ll say it again; watching Carbonari you can feel you’re witnessing something on the verge of bigger things. They have an air almost professional arrogance about them & I just hope that the management deal they recently signed was more about the management making the right career moves & money for the band, rather than the band making money for an absent manager. I say this because I feel we should be force-fed Carbonari for breakfast, dinner & tea, they should be on the TV, on the radio, on the net, on your nerves, maximum exposure.
Two or 3 of the new songs they’re currently recording were given an airing tonight in a set that was as short as Sarah’s skirt but not short on quality, I look forward to seeing, reading & hearing them in the national media soon. 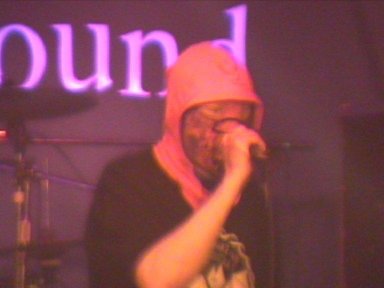 I’ve got to stop building bands up before seeing them, I did it to Junebug a couple of weeks ago & I did it to Alien Matter during the run up to this show. OK they didn’t let me down but they didn’t make my purple glistener shine in the strobe light either. A new set, a superb new guitarist & keyboards that buzzed & fizzed through a dodgy DI box put paid to the drunken memories of when I last saw them. The Sons of Selina influence has all but gone with a hard guitared full frontal assault in place; even the singer Pete, normally shy on stage came at ya (‘til he took his mask off). New guitarist Gary Hubble is behind the tweaking style change, I do miss Muff’s playing & the band would be beneficiaries of him rejoining & Gary staying on too. The final track had an outro with a 3-minute slab of pure sex with a guitar not too dissimilar to Lynyrd Skynyrd’s Freebird; (I came twice, once over Sid).

I hate pigeon holing bands with words like ‘Indie’ ‘Grunge’ or ‘Punk’ – it’s lazy & I’m often caught snoozing on the job. When I saw Tetra Splendour roll out 3 keyboards to the front of the stage I swiftly ran for my book of adjectives (called Wayne The Bastard), he came up with Radiohead meets the Butthole Surfers in a head on train crash of Hatfield proportions & Toploader doing a charity gig for it 2 years later (or Gorky’s Zygotic Mynci – it’s the same thing). A Robin Ringpiece Hemuss Reliant lookalike on those very keyboards gave us big sweeping songs far more intense than their 2 track demo. Perhaps too avant garde for a Rhyl public coming to terms that there’s more to music than Blink 182 & Greenday. Nevertheless Tetra did Splendour (sorry, I couldn’t resist it) on the night & had them up dancing by the end & can be congratulated on keeping the crowd at the gig during what is now known as the ‘graveyard slot.’