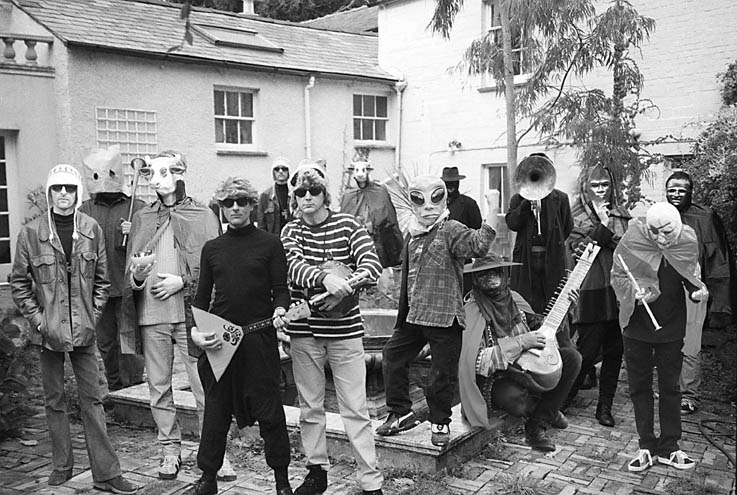 What’s got 70 legs and hoots like an owl? Britain’s newest (and oddest) supergroup.
Dave Simpson drops in on The Serpents

What do Echo and the Bunnymen, Super Furry Animals and an obscure group called The Land of Nod have in common apart from the fact that some of their members have been known to gather in a courtyard with the model Catalina Guirado and hoot like owls? They’ve all supplied artists to what’s possibly the strangest pop group of all time.

The Serpents describe themselves as a “35-piece Anglo-Welsh supergroup”, and also include members of The Christians, The Teardrop Explodes and writer Jon Savage, along with lots of lesser-known musicians, mostly from Wales. But while some Serpents have acquainted themselves with the top 20, it is unlikely that their debut album, You Have Just Been Poisoned By The Serpents will cause All Saints many sleepless nights. This is just too original and revolutionary a pop statement.

Recorded in two 48-hour jam sessions a year apart, the album boasts of “musicians working on the fringes of unpopular music” and “instruments” that include wine glasses, electronic toys, a pneumatic drill and a Tibetan singing bowl. As if that wasn’t odd enough, it also features a mysterious celebrity guest who for legal reasons is forced to use the pseudonym Merlin Zol, and three “unknown musicians” who were discovered playing in a burial chamber. More to the point, the music’s strangely good mostly somewhere between Can and Spiritualized, although Flowers In The Cellar updates Pink Floyd’s classic Meddle.
But a pneumatic drill? Songs called Lunatic Tester and Seirff’s Up? Cloaks and funny hats? Is this as The Serpents claim a statement against the over-processed, marketing and money-led nature of current pop music and in favour of experimentation, improvisation and “the candle-lit world of Anglo-Welsh surrealism”, or something very, very silly?

To find out, it seemed reasonable to interview them, but that meant a journey into the heart of the Welsh mountains and, unsurprisingly, more surreal twists. “Wait at Bangor station,” their publicist whispered conspiratorially. “Somebody will collect you. Obviously, it won’t be all 35 of them at least, I don’t think it will.”
In the event, just three Serpents arrive at the station. Ann Matthews of Welsh popsters Ectogram smiles sweetly. Alan Holmes (of the same group) grins disturbingly, and David Wrench (the Ankst label’s only artiste) wears the presumably obligatory funny hat. “It’s a short drive from here,” says Ann, before they bundle me into a battered car and start discussing The Wicker Man, a mystical film about human sacrifice.
Eventually, we arrive at a sizable if slightly run-down country house, which turns out to be the Bryn Derwen recording studio, owned by one Laurie Gane and his charmingly weird, Nico-like wife, Gabrielle.
“Eric Clapton replaced Laurie in The Yardbirds,” says Wrench, casually.
A door leads to the studio’s “live room”, lit up by stained-glass windows salvaged from an old church and containing the original drum kit used on the Soft Machine and Syd Barrett albums. Dotted around are some of the strange instruments used on The Serpents’ disc. As several band members gather around for tea, we’re joined by Tess, a bounding black labrador.
Don’t tell me. Another band member? “Of course. She’s on the album,” retorts Alan Holmes, almost insulted. “She has a fine whine.”
Journalist suitably thoroughly wrongfooted, The Serpents begin their strange, enchanting tale.
It all began when Alan and former Teardrop Paul Simpson (who now records as Skyray) were looking at an album sleeve by Japanese band Ghost, which depicted, according to Alan, “lots of strange Japanese people with funny-looking instruments at this big house. We just thought, ‘Wouldn’t it be great to do that sort of thing here?’ ”

Initially, Paul sent out invitations to a so-called inner circle of like-minded musical souls. Not just any invitations, mind.
“They were more like packs,” remembers Zoe Skoulding, a blonde poet with an ethereal smile. “Everybody’s had a strange object in it.”
Some received feathers. There were lots of balloons.
“Mine was a goat’s liver,” grins David Wrench, proudly.
Initially, only 12 invitations were sent but everything snowballed as people brought friends and fellow musicians. According to Paul Simpson, “lots of people just turned up on the day weird guys playing gongs.”
Henry Priestman from The Christians not only brought a marimba from a car boot sale, but also the sultry Ms Guirado, who’s more usually known for saying “Sorry, love, you’re just not my type” as the “Gorgeous Girl” on TFI Friday.
Catalina insists she is a massive fan of psychedelia, but she’d never recorded a note, nor did she have lyrics. No problem. “I just sang about my acid trip when I was 17,” she smiles. “Acid Slug it’s about a slug that I saw when I was tripping.”
She grins sweetly.
“My Mum likes it.”

However, musically it wasn’t all plain sailing. Some tunes came out of thin air because of “the magic of the area”. But there was a particular problem with a song where the band all stood in the studio courtyard, hooting like owls.
“We couldn’t use it,” sighs Alan Holmes. “It was too much like Oasis.”
As the line-up and their minds expanded (fuelled by a terrifying local homebrew known as Satan’s Sperm), so did the recording locations. Getting 35 people into one room at the same time proved a bit tricky (they managed 25), so sessions expanded beyond the studio and its courtyard. Bunnyman Will Sergeant holed up with his guitar and gadgets in the treehouse in the garden, while others dropped microphones down a nearby well. Mike from Longstone took to recording the “ambience” of the nearby Flowers Brewery (strangely, he was there rather a long time). While a core of musicians worked on actual songs, “atmospheres” were taken from a crypt in a ruined sixth-century chapel in Anglesey.
“Acoustically it was very interesting,” says Alan Holmes, sagely.
But perhaps the most rewarding sessions took place at Din Lligwy, a burial chamber. “We had that idea after recording in the crypt,” says Zoe, sweetly, “but when we got there there were already three people sitting in there playing guitars and flutes, so we recorded them.”
Bizarrely, The Serpents never established the identity of these unknown musicians. Instead, when the album was finished, they left three CDs in the burial chamber for their mysterious benefactors. A fine gesture – except, says Ann, “One of the lads from the village got wind of it and stole them.”

It all seems very daft, but The Serpents have a serious manifesto. Their music spans 30 years of pop and the line-up several generations (the oldest is more than 50, the youngest just nine), and the venture challenges the notion of what a pop group is. More importantly, the music has a sense of adventure and community that most pop has long since lost, as well as a certain spirituality (the sessions were booked around the autumnal equinox). The group’s name derives from the Biblical “Be ye wise as Serpents”, but also nods at an ancient symbol which, as Alan puts it, “denotes a curved path as opposed to a straight line. That’s how the music works. It’s not obvious.”
“The idea was to have fun, but to have recognisable songs and structures,” says Jon Savage, who reads a short story and much to his horror was coaxed into playing drums. “But it wasn’t like a 60s freak-out. You listen to those and there’s a lot of indiscipline and noodling.”
Kev Wright (drums) laughs heartily: “And we edited all that out.”

Admittedly, nine hours of tape was distilled down to 70 minutes, but mostly, You Have Just Been Poisoned works because of the “real empathy” between the musicians. For most, such as Bunnyman Will Sergeant, being in The Serpents provided a sense of freedom not found in the traditional music business.
“It was a no-pressure thing,” he enthuses. “We did 10 hours of jamming, but it takes us (the Bunnies) three sodding weeks to get a drum to sound right. Nobody went, ‘Oh, this one goes like this.’ It was doing music for the right reasons, rather than chasing after money. Nobody was pushing anybody around. If you got bored you could just potter around in the garden.”
Already, there are plans for another, even larger recording session this September, and The Serpents are threatening a live gig.
But the founding member might not be able to make it.
“I fell out of the treehouse,” sighs Paul Simpson. “Nine months later, I’m still in physiotherapy.”