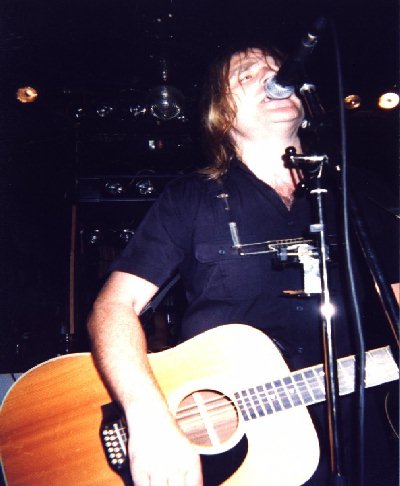 We all did it 16 years ago, we all laughed at Top Of The Pops as The Alarm mimed their Top 10 hit 68 Guns, the Clash clones of Rhyl had hit the big time & everyone ridiculed them for it.  It was our way of covering our envious jealousy.  The Alarm did it right, they hit it big in America; the bigger market.  But this is where it all started, at The Bistro in Rhyl where you pulled dodgy birds/blokes, while Mike Peters working behind the bar pulled even dodgier pints. Although he doesn’t play that Top 10 hit any longer he made the exception tonight, claiming that he wrote the song while working behind the bar.  Every hair on my head stood on end as the shiver made its way from my brow to the base of my spine as I stood in awe of the nostalgia being presented to me with 2.5KW of power. 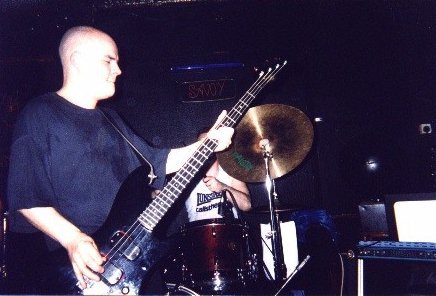 It had been a long evening, it began with a tipple in the company of Steve Sync (keyboardist with the Sons Of Selina) & Fairziff of the Blind Lesbian Dwarf Appreciation Society.  I had earlier been force fed a steak & ale pie at the Windy Arse pub in Abergele & my stomach was still arguing with me as to which direction this alleged food should travel.  Due to taxi difficulties we arrived at the busy Bizzy during The Fluff‘s set, at the same point I arrived last week (see below).  So I recognised the songs, particularly the funk version of I Heard It Thru The Grapevine.  The adjectives keep popping up for Fluff; tonight they struck me as a good Kava Kava; or a Kava Kava with songs instead of an incident of notes thrown together.
The already packed Bistro was further swollen by the false rumour that Billy Duffy (The Cult) would be making an appearance; no doubt an advertising ploy by Lord Trehearn.  The crowd of late twenty to thirty-somethings was full of local celebs, Sons Of Selina (represented by Sync, Bonehead), BLDAS, Mike Jones (Iffy PAs Ltd.), Sandy (Ewloe Studios), Mike Jones (The Windings), Pete McGuinness (Shore FM), Redhill, Huw Spew (Denbigh Festival dis-organiser)
She Said suffered tonight, a bass drum skin is not something a band carries round as a spare & when the thing breaks on you after 2 songs you know you’re in for a hard time.  Steve Sync (musical heathen of the early 80’s time warp) pointed out that you shouldn’t play a ballad 3 songs into your set, I asked why not, & he pointed out that just about everyone was talking & paying no attention to the band.  My initial impression & single adjective for She Said was ‘slick’.  Very professional (meaning they were getting paid tonight) & they added a very young keyboard player who none of us could hear (probably very shy).
The gremlins were out in force, not content with the occasional buzz, chewing a bass drum & quieting down a keyboard; they took James Stevenson’s guitar out of Mike Peters‘ band for the 1st 4 songs.  Being what seemed an age to mount the stage anyway the last thing everyone needed was a further delay.  So while the Iffy technicians frantically searched for a 13amp fuse or whatever the problem was, Mike improvised with an acoustic version of The Spirit Of ’76.  Boasting ex-members of The Alarm, The Mission, Generation X & Stiff Little Fingers the band, fresh from a North American tour played to the home town & didn’t let them down. It was energy filled and heartfelt…
This line up is essentially a supergroup performing Alarm songs; whether they’d get away with calling it The Alarm remains to be seen, or perhaps they’ll play a set made up of the hits of all the above bands as a greatest hits package.
We shared a taxi home, myself & Fairziff got out before Steve Sync & I gave him 8p & Fairziff contributed 15p towards the £3.50 fare, Sync was so drunk he didn’t notice. I chuckled to myself as I trotted down the road home humming 68 Guns 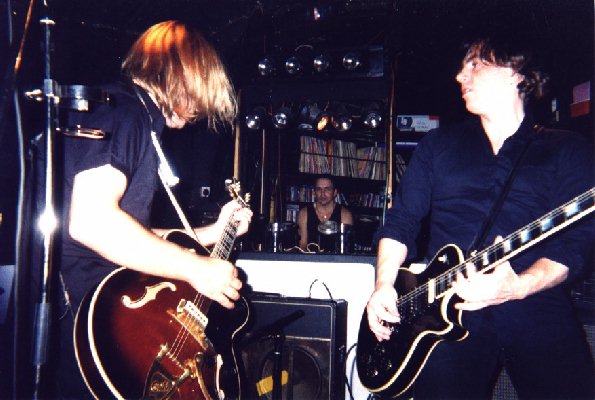 Shoring up the Shore FM Pineapple / Blue @ The Bistro, Rhyl