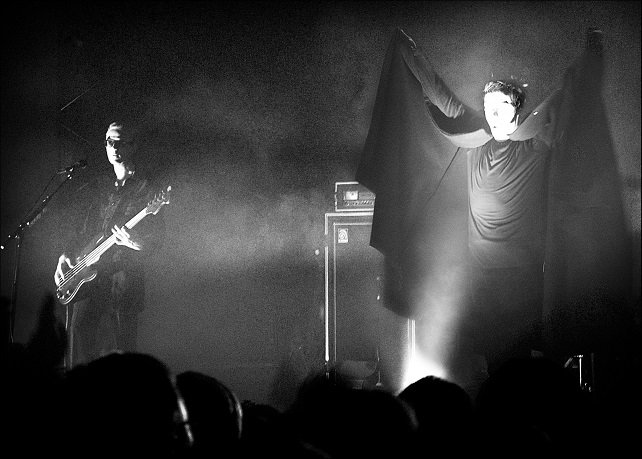 I got into Bauhaus in 1983, just as they split up so I never had the chance to see them live. Having played such a big part in my musical upbringing, not so much in the content of what I do but more so as the band whose releases I would (& still) play time & time again, I was in two minds before going to this show. I was apprehensive about being let down, this band, like The Damned have meant so much to me over the last 20 years, but unlike The Damned, Bauhaus did not let me down on stage.
From the opening rumble that seemed to last a lifetime, I knew, along with the bulk of the capacity crowd, that a lifetime dream was about to come true…
The black curtains spread apart & the sillouetted figures of Daniel Ash, David J. & Kevin Haskins stood as the opening bars of Dare greeted the excited revellers. In Pete Murphy’s place stood a large TV screen on a stand, on this screen was the man’s face daring us not to give him our undivided attention as he sang to the camera from backstage. Fantastic; imagine seeing the band playing as this huge face in the middle of the stage looks at you; all of you. The song finished, the cheer went up, the screen was removed and the charismatic self (un)proclaimed father of darkness arrived in the flesh, the cheer went up even more.
The billing did advertise Special Guests, whoever they were, they didn’t show, there was however plenty of entertainment to be had from ‘people watching.’ Goths of every denomination packed into the Academy, some had brushed the dust off their old leathers & spiked their thinning hair up for the occasion, others it seemed did this every night anyway as the atmosphere wreaked of rubber Basques laddered fishnet tights, white pan-stick make-up, black hair-dye & necrophilia.
We left Mark Radcliffe enjoy his new found fame at the bar, as myself & the big boy Fatman lost some weight down at the rough end, exchanging hefty blows with the New Model Army rejects who had turned up to, like ourselves, re-live their unforgotten youth.
The sweat poured off to Kick In The Eye, In The Flat Field, She’s In Parties, etc etc. While we stood in awe to the performances of Hollow Hills, Rose Garden Funeral Of Sores & another number which must be new.
With so much back catalogue to choose from, the show could’ve gone on for hours & none of us would have complained, although I would love to have seen them play Sanity Assassin, Spirit, Honeymoon Croon & In The Night, but there again, 3 months ago I wouldn’t have envisaged it possible to see Bauhaus live.

Four encores was not enough, we had ripped the place apart to Ziggy Stardust, wallowed in the reverence of Bela Lugosi’s Dead, boogied to The Passenger & finally showed our complete admiration & appreciation to a band that had & still mean so much to us as they played out with All We Ever Wanted Was Everything.
All I ever wanted was Bauhaus. Now I have seen them my life is complete. Now I have nothing left to live for.
Goodbye cruel world.