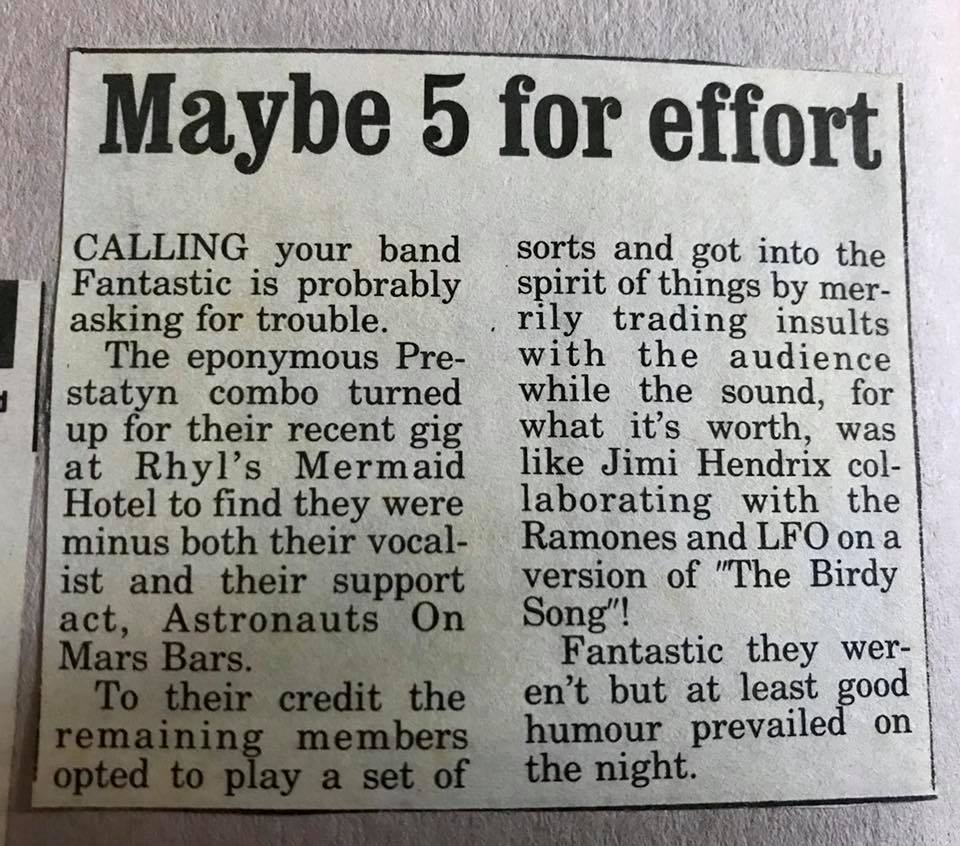 Scott Causer of Fantastic writes…
I came across this review of one of our very early gigs yesterday. In the early 90s we’d book ourselves gigs under different names (a necessary task as we sure as hell were never ever going to get booked again). This time we’d booked ourselves in as ‘Fantastic’ a reggae band from Prestatyn. We were due to play the Mermaid, the roughest pub in Rhyl.

Armed with only a bunch of half songs and riffs (our one rehearsal was spent somewhat unwisely getting pissed and having a laugh). We turned up to find the support band wasn’t happening and also our lead singer had bottled it. Us being us, we decided the show would go on regardless.
A bunch of rowdy bikers had turned up intent on causing as much trouble as possible. We decided to delay the show by an hour until we were suitably drunk enough to play.

We knew as the first notes rang out that this was quite possibly the worst decision we had ever made when Johnny Napalm, our newly appointed singer got slapped by one of the bikers. Wearing shades and a flasher’s coat, he didn’t see it coming. We still ploughed on…
We lasted a total of 15 mins before we had to abandon the show due to numerous fights breaking out and as the launching of numerous projectiles in our general direction began to land (the last straw for me was a pint glass smashing right by my feet).
Johnny and myself made an attempt to escape through the back only to be confronted by 2 rabid Alsations. We then realised the only feasible way out was to make our way through the fighting taking place in the narrow bar in front of us. Tony the punk kindly and politely stopped taking one of the bikers apart to let us through with our gear. Amazingly, we managed to escape with all of our body parts still attached. We made it to the safe haven of the Bistro only to be met with angry punters who demanded their money back and one deliriously drunk dude who thought we were the best thing he’d ever seen.

Unsurprisingly this was the last show I ever did in Rhyl. Steve Rastin, a local journalist managed to immortalise Fantastic and published this surprisingly kind and accurate review. Now I don’t know about you, but reading this… this is a show I’d love to have watched.