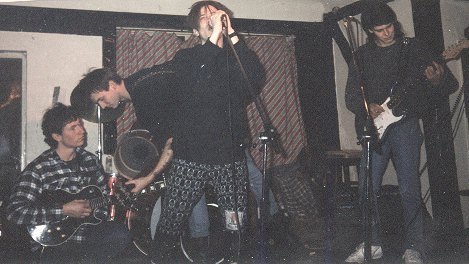 Cumi & Matt didn’t really want to play this gig, as Bee gigs, or, Rhyl gigs to be more precise aren’t really worth doing. I can see their point, but a gig’s a gig. 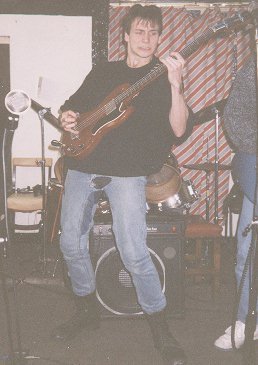 There was no one there until 9.45pm then everyone started arriving, about 35 in all, which, for a small back room in a grotty pub, makes things nice and cozy and usually a good atmosphere.
The soundcheck was a nightmare trying to get the levels right and a twat called Boz slagged us off after I told him to put Robin’s guitar down. I can’t fucking stand musos who think just because they can play an instrument it automatically gives them the right to pick anyone’s up and play it. There again, at least he could play!
Usually when a soundcheck is a nightmare the show is a cracker, if the start was anything to go by then the nightmare was continuing after we’d woken up! LSD was first up which resulted in a broken string for both Robin and Gumpsh. Shit! And here’s me trying to convince the present Martin Trehearn that 4Q are good enough to put on at The Bistro. Then after the guitars were restrung Gumpsh had lead problems (shouldn’t buy cheap leads!), so the rest of us did a rendition of PURPLE HAZE whilst he sorted the matter out. The rest of the set went smooth enough and the VD Crew were on form, leaping about, throwing pint glasses (one hit Matt’s kit and Cumi stamped on it, sending shards everywhere) and beer in every direction. 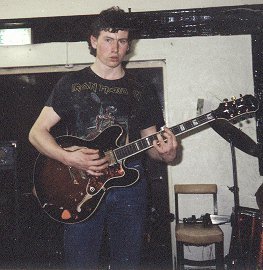 The aftermath of the gig left the Bee a scrap yard of spilt beer, gob, broken chairs and broken glass, as our travelling contingent of pissheads, dopeheads and mental patients quite literally trashed this back room that was more accustomed to Rhyl Folk Club.
The sight of one of Matt’s numerous girlfriends slouched unconscious over a chair with her head tilted back and then vomit like a volcano all over her own face and hair will stick in my mind for the rest of my life.
The sight of this little back room also stuck in the landlord’s mind as he went berserk when he saw the state of the place. He tried to get us to pay for the damage and threatened to call the police, but we pleaded that we didn’t know who the crowd were and couldn’t control what went on….
Guess we won’t be invited back and guess Martin won’t want us to play The Bistro…