Anhrefn made it worth coming while the others just ‘played’. 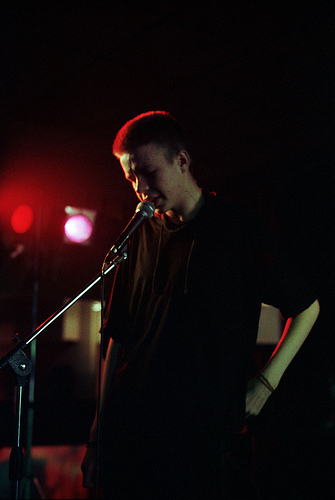 The talking point of the night was when. Band claiming to be Terry Waite A’r Asid (Llyr Ifans pic left) went on stage and played 35 minutes of pure noise, just strumming and hitting anything in sight? The ugly man from Angladd Huwcyn picked up Dewi Gwyn’s (Anhrefn) guitar and nearly got his head smashed in. Paul O’Brien from the band did okay because he played his own instrument but the other clowns fucked things up.

Anhrefn did a great set including the brilliant Dawns y Duwai.

Letys Seicadelig‘s vocalist, Sion (pic above) only seemed to sing one word throughout the set; that being ‘Wah’. They didn’t impress me that much, although they were quite lively, melodic and danceable. I just can’t really understand what they are trying to do. I’m looking forward to hearing them on tape to assess what sort of sound they get. 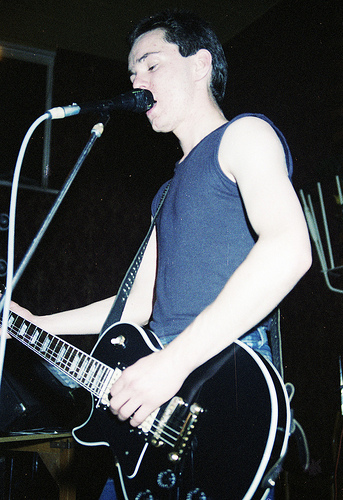 This was a gig for Plaid Cymru Youth Section’s Fight The Poll Tax policy. That was a good policy but the idiots who smashed glasses, flooded the toilets and set off the fire alarm at the end, spoiled things somewhat.