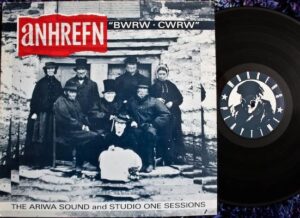 (today is 27.05.12) – After being re-blessed with a turntable after being without for many a year, I revisited Anhrefn‘s 2nd album, Bwrw Cwrw (Lots of Beer!). The old adage ‘Difficult second album’ sprang to mind when I first heard this record 23 years ago, and to be honest it’s probably been 23 years since I last played it. I was disappointed at the time and wrote about my despondency in Crud fanzine.. something along the lines of ‘thin new wave and the rest of it is reggae.’
So it’s now time to revisit it…
Twenty three years on and I can see where the thin new wave came from as the production on the punkier songs do lack the bollocks to make it the punk-Anhrefn we all knew and loved. Opening track Meddwl Ar Gau (Closed Mentality) is a difficult one to start an album, it does run along typical Anhrefn but is overshadowed by the second song Be Nesa ’89 (What Next in ’89), which was the previous year’s single to promote the Rock Against The Rich Tour with Joe Strummer.

Anhrefn’s line up had been carved up after the release of their debut LP ‘Defaid, Skateboards a Wellies’ – Hefin had vacated the drum stool and Dylan Hughes had been usurped from Y Cyrff. Dewi Gwyn also mutually left the band, which paved the way for Maffia Mr Huws guitarist Sion Jones to join the brothers Rhys Mwyn and Sion Sebon.

Track 3 Gwylio Mrs Jones (Looking For Mrs Jones) has a latter day Stiff Little Fingers feel to it with some nice stabbing guitar chops and even the synths (by Dylan) work. Unfortunately the next song Dim Llais Dim Poen (No Voice No Pain) owes more to Maffia and The Police than punk rock, it is new wave and it is fucking awful, which probably put me off the album all those years ago! (Sorry Sion!). Crafwr (Scratcher) however, more than makes up for it. This is traditional Anhrefn, I recall it being a ‘new one’ at gigs in 1988 with its singalong chorus and its sense of punk rock urgency.

Track 6 is Y Freuddwyd (The Dream), which plods along quite nicely, again, in typical Anhrefn fashion and quite punchy enough. This quickly followed by the excellent Bach Dy Ben, that the band say is translated roughly to mean ‘Cocky Little Twat’ – it made the perfect B-side to Be Nesa ’89 and is as fast and ferocious as you’ll get with this band. Although their version recorded for a John Peel session is probably twice as fast! 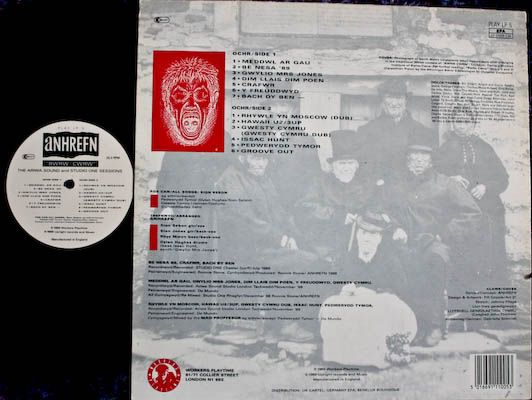 Flip the album over for Side Two (Ochr Dau) and you’re greeted by a dub reworking of one of  Anhrefn’s earliest songs Rhywle Yn Moscow (Somewhere In Moscow), as you do with Hawaii U2/3UP, which is a reggae version of Cornel (Corner) done in a Clash pre-London Calling style; extremely catchy, inoffensive and there for entertainment’s sake.

The jewel on this album is the band’s version of Geraint Jarman‘s protest song Gwesty Cymru (Hotel Wales) – a truly brilliant track, as punk should be, angry, to the point, without losing the plot – it morphs into a Dub track a la Armagideon Time / Kick It Over (Clash), complete with pan-pipes – and it works.
Track 4 – side 2 is an instrumental Isaac Hunt (a moniker I used for years when pseudo-writing). Again, it’s that simple catchy reggae we find on the opening 2 tracks before it smashed into a fast riffalong number and back again into reggae.
To round Bwrw Cwrw off is a short punky ditty Pedwerydd Tymor (Fourth Term), which is ok, average Anhrefn; maybe swapping sides with Bach Dy Ben would’ve made a better finale.

Overall verdict… Yeah… maybe the opening track could’ve been better and taken out the Dim Llais song altogether would’ve made this a pretty decent album…
Check it out now, you’ve got funk and soul brother…