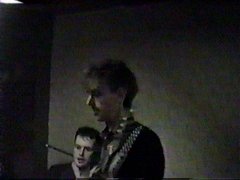 Always loving a challenge 4Q agreed to play at the wedding reception of Hagar, one the Henchmen (Hell’s Angel’s Chapter).  The ‘stage’ was the toilet roof of the Pen-y-Bont pub in Abergele, & the assorted bikers assembled in the beer (yard) garden 3 metres below.

Sanctuary (featuring Stu Ginge on bass, who played drums for 4Q in Bangor) and The Tarantulas were both bottled off, despite playing ‘Biker Favourites’ such as Knocking On Heavens Door.
Steve Sync recalls: ‘This was years before I officially met Neil, but I was at the time in Zodiaque UK & turned up to do this gig.  We pulled up the road to see hundreds of motorbikes, we were all dressed in our black polo-neck sweaters & the lads didn’t look too keen on playing. So I went in to the pub first & a hell’s angel stopped me & asked if I was really sure I wanted to go in there, I nodded & went in, took one look at the all the shagging, drug taking & support bands being bottled & I turned right round & left very quickly.’

Paul Puke actually stood in as drummer for the 1st band after their drummer left early in the interests of self-preservation. And having already received a cider bottle smashing all over the kit, Paul wasn’t too keen on doing the 4Q set, particularly when you consider that the other bands were playing rock music & well known covers to a biker audience, & 4Q were really a bunch of punks playing tuneless crap!  Paul had only just been welcomed back into the 4Q fold after a 2 month absence & a bottle on the head wasn’t what he wanted.

Neil, diplomatically found his ally in the Henchmen & got him to announce on stage that pelting the bands wasn’t really a nice thing to do, & 4Q got up to play their set.  Thankfully for the band the only missile launched during the set was a sausage roll, but after a nervous half an hour & the final song had been played a hell’s angel climbed up the ladder onto the stage & said; ‘Play some more or I’ll throw you off.’  Not really fancying the 3 metre drop onto hard concrete, the band played Jerks, then another hell’s angel climbed up and smashed a strip light over Wayne’s head, covering him in white mercury-powder. 4Q decided it was time for sharp exit & climbed through a small upstairs kitchen window & swiftly out of the pub.
Neil explained: ‘I had anticipated this kind of scenario beforehand & made sure the support bands provided the amps, PA & drum kit. This way we only had to remove ourselves & 2 guitars in the event of trouble. We left at about three in the afternoon. I went past the pub later in the evening & Sanctuary were playing, & had done so with The Tarantulas all day!’