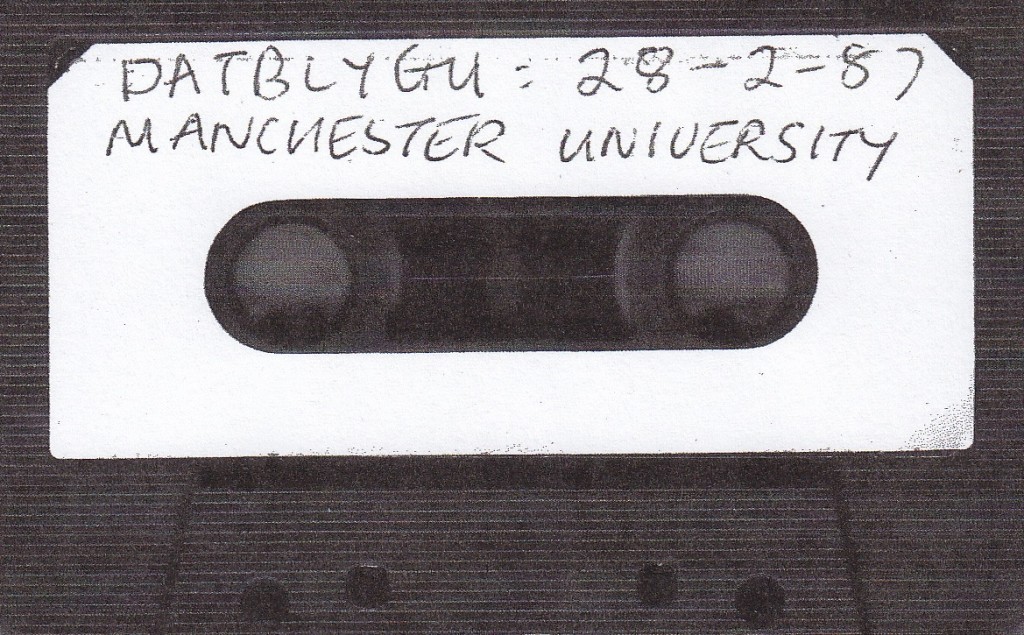 Got picked up with Huw Prestatyn (who lives in Rhuddlan, not Prestatyn) in the Anhrefn tour bus (well, hired minibus) and headed to Manchester University for the first night of a two day jaunt into England. It took us ages to find the venue, like Bangor, the University spread out across a lot of the city, so ‘Live at Manchester University’ is really a very loose term. We also failed to see any posters advertising tonight’s event, but were assured once we finally found the place, that flyers had been distributed the week before.

Datblygu turned up from their hut in mid-Wales, a line up that is David, Patricia and a drum machine and in front of about 70 to 80 people; including bar staff and sound engineers they raised their ugly heads and peered at the unsuspecting faces. They’ve been called Kraftwerk with a hangover and their music falls into The Fall [sic] mould and I can only describe it as an experience, a spectacle actually! Both David and Patricia’s attitude seemed to be one of total disinterest, as if they were hating every second of their own performance but were unable to do anything to stop it.
Very few bands like an in-house PA and Datblygu are no exception as David continually demanded, ‘Will you turn the fucking drum machine up please.’ He repeated the line so often that fitted quite well into the song!
The Datblygu experience (my first time!) was perhaps not as long as it should’ve been for me to fully get what they were about, their set included titles such as Tymer Asprin, Mynd and the near legendary Peel favourite Casserole. Perhaps the idea was to give the audience a short sharp shock, whereas in reality it was a slow, dull uncomfortable pain – they’ll probably go a long way… if they wanted to.
Then Anhrefn mounted the stage and Sion’s guitar blasted into 500 watts of Cornel (his amp is probably 100 watts, but 500 sounds better in print!). The song is about the same guy, same pub, same pint, same corner, same Tom, Dick and Harry and is pretty new in Anhrefn terms and pretty damn good. I thinks this is the fifth time I’ve witnessed an onslaught by the band and fifth time I’ve walked away feeling fulfilled. There’s never a dull moment when these lads hit their notes; Hefin Huws is sat tightly at the back thumping those drums like there’s no tomorrow, Rhys Mwyn is stood there looking proud as he pumps those bass notes through his amp, and there’s Sion Sebon and Dewi Gwyn providing us with two guitars and vocals. Sion picks a chord, gives us a twang and they burst into another song while Dewi struts around providing ample back up; he was once reported to have played a solo!
When it comes to breaking the ice with an audience, Anhrefn must be pioneers at it, and despite wide open spaces due to a lack of a large audience the band finally coaxed the nervous gathering down to the front to boogie to the encore, which lasted four songs (Anhrefn hate doing encores).
After the gig Rhys complained over the apathetic way the hosts handled the publicity – or didn’t in this case! Yet it was a success by the fact they made more new friends and future gigs in the city will only be beneficial to both band and punter! A floor for the night was kindly donated by Artists For Animals co-ordinators Peter Elliot and Sue.