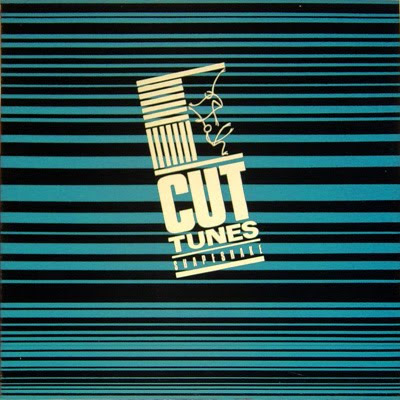 Central Slate Records (SLATE 1) 1985 – click pic for free download
(taken from Turquoise Coal) – Although Cut Tunes was the first official manifestation of Gary Cut’s long running Cut project, its roots can be traced back to the first incarnation of A Silly Tree, where Gary’s interest in repetitive rhythm-based music first came to the fore. Indeed, one of the staples of early Cut Tunes sets, ‘Still a Problem’ had also been a regular fixture of early A Silly Tree gigs.

Having had to bow out of A Silly Tree due to art school commitments in 1980, Gary worked on his masterplan before returning to Bangor, joining The Pinecones and re-uniting with old school-chum / band-mate Alan Holmes to form the first of what were to be many versions of Cut Tunes in 1982.

The only record of this initial duo appeared on the compilation tape “Just When You Thought We Were Dead: Music from the Bangor Area April ’82 – April ’83” which featured an early version of the future Cut Tunes classic “See HIM!!! Draw (Zip Zap Zap)”

The duo played live on 12th May 1983 in Bangor University, but were very much dependant on the use of pre-recorded backing rhythms and so Gary promptly recruited a rhythm section of Ian McMillan and Maeyc Hewitt. Saxophonist Phil Layton was also added to fill out the sound. This line up quickly earned a reputation as one of the hottest live acts in the area, and when Phil left the area, he was replaced by two further wind players, Ann Matthews on Clarinet and Jim Prosser on Saxophone. It was this line-up that travelled down to R.S.C. Studios in Bath in May 1985 to record the debut Cut Tunes 12″ EP, which appeared as the first release on the nascent Central Slate Records that October.

Five tracks were recorded during the sessions, the three strongest appearing on the record. The EP received airplay on John Peel’s show but further line-up changes prevented the group from capitalising on the attention. Here for the first time, we can let you hear the remaining out-takes – a version of the old A SIlly Tree favourite ‘Still a Problem’ that somehow failed to capture the live power of the song, and ‘That Joint Was Cooking’ – Gary’s observation on the 1981 Toxteth riots which he had personally got caught up in a few years previously.

Cut Tunes went through many further line-ups before morphing into first Cut 23 and then Cut 72. The full story can be found on Gary Cut’s official site.