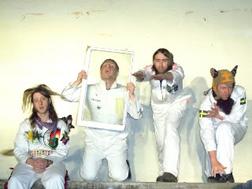 Amlwch psychedelic-psyche nutters Seagull Kinevil imploded in 2012. Formerly called Valleum, their legacy was a clutch of great albums; particularly the 2007 masterpiece that is ‘The Rainbow Hours’ and it’s excellent follow up ‘To Insanity And Beyond’ (2010).

The band went their separate ways – several drummers ended up in the landfill where all drummers belong. Marcus Peachey ventured to Thailand before heading home and can be found entertaining the masses with his mandolin and sharp wit. Alun Beans and Warbie eventually teamed up in El Borracho (via The Glitches) – check out their new EP here.

A random conversation over the digital unavailability of ‘To Insanity And Beyond’ ?led to a track on Bandcamp called Rowenna and the news that it was from an unreleased 2012 album called ‘Tolls And Trolls’.

After a little to-ing and fro-ing link2wales can announce that ‘Tolls And Trolls’ by Seagull Kinevil will be released soon.

END_OF_DOCUMENT_TOKEN_TO_BE_REPLACED

So I was pretty thrashed to several inches of my life but quite fancied the look of this Hendre night. It was marketed as a night of own songs and covers of Nirvana and Pixies songs which was enough of a prompt, added to folks high regard for Valleum’s recent output on these pages, though it turned out to not be more than 1 cover from each so really it was a good job there was enough else in their performances to keep the attention.
END_OF_DOCUMENT_TOKEN_TO_BE_REPLACED

A lazy review and attempt due to lack of memory and what not but hey. Penrhyn Old hall is generally full of kids with minds that seem to close towards bands other than Lantern playing, and it was still apprent that the mast majority of people in the venue would stay away from the stage area (which is seperate to the bar etc for those who dont frequent pen old hall) and focus on the social part of the night, their loss because they missed some awesome bands this night.
END_OF_DOCUMENT_TOKEN_TO_BE_REPLACED