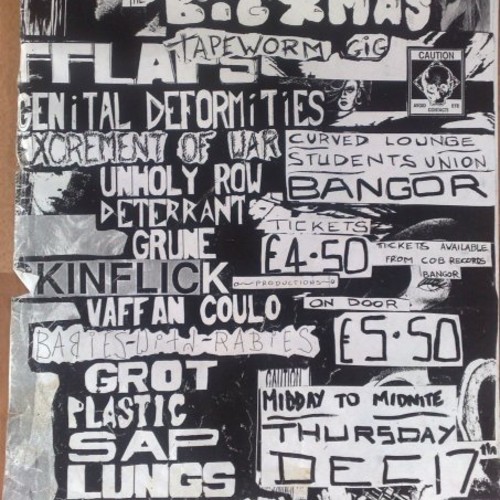 Speaking in 2014, Joe Shooman says, ‘I got arsey with some bloke in Wales on Sunday who said there was nothing good musically happening in Wales. Then he printed my arsey letter, which was a good way of a) admitting there was stuff going on and b) filling his column. I’m wise to you, journalist bastards! Wouldn’t catch me doing that. Oh hang on…’

Speaking in 2014, Joe Shooman says, ‘I still love the ‘thanks’ section of that tape. Justin (Skinflick) knocked up the design on his Atari ST. I think they were all photocopied at work in various places, then the tape info was cut out and pasted onto the tapes as required. I reckon about 200ish got done all in all – and then Rhodri Tomos and Ian Gill on Radio Cymru gave us a session. Almost certainly because of the track ‘Sheep Burning Bastards.’ Oh, and we applied for the Bangor City job too. And there’s that Tapeworm flyer… and a claim in the press that it was gonna feature ENT, Doom and Bolt Thrower, now that would have been quite a line up. As it was, it was nuts enough.’

Joe Shooman says, ‘We got a bit overexcited so Mr IFW aka Icarus Panchaud and Daniel Shooman, my brother gegged in the picture, which was taken on the steps of one of our old practice rooms. This one’s on Deniol Road, Bangor, the old church/hospital (?) opposite Aldi which is now flats.’