Chris Diary of a Madman, Gig Reviews 4Q, U Thant 1

Considering that the organisers paid £180 for the PA set up and the amount of equipment they had to hand, for our set anyway it sounded shit. I suppose that having 2 lead guitarists who are constantly having a private battle with each other for supremacy, does confuse your average sound engineer. Not having the chance to soundcheck due to U Thant‘s late arrival didn’t help matters. The 1st band on were called the Mistecs from Blaenau, a schoolboy tupenny Metallica type shite band, everyone has to start somewhere but fucking hell these children should’ve stayed at home. Then Jon Busker insisted on playing his anti-fox hunt song which was enough to drive you to killing foxes! The Mavis Riley Experience mob were an indie uplifting outfit – wonderful, even Matt liked them.
END_OF_DOCUMENT_TOKEN_TO_BE_REPLACED

On their own Thant label (THANT 003) – 4 track EP
END_OF_DOCUMENT_TOKEN_TO_BE_REPLACED

Debut album on their own label (THANT 002) 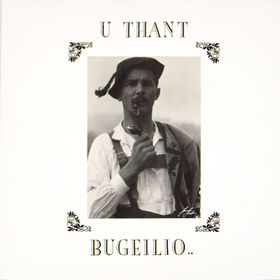