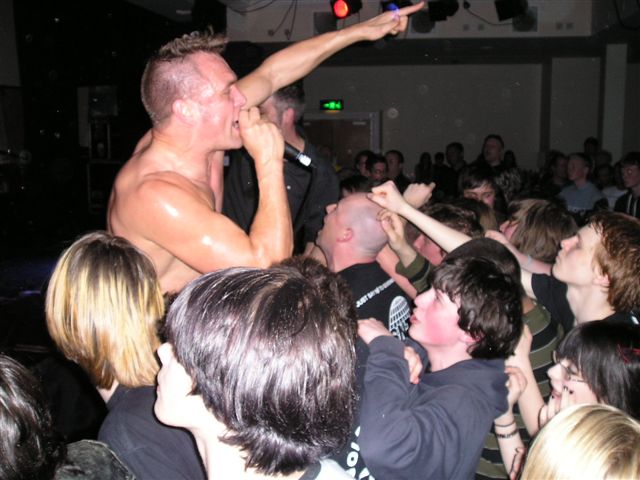 Yet more of the 30th Anniversary of all things ‘punk rock’; seems to me that just about every event this year is claiming to be directly influenced by or nodding its proverbial head in recognition of that beast known as punk – At least this one has some of the people who were actually there, Matlock being with the alleged inspiration to all, Charlie Harper was there from the outset, though lets be honest Charlie is old enough to have been there at the Big Bang!

In addition Blackburn did host The Sex Pistols, Wed 15th September 1976 to be precise, this gig being witnessed by a young Steve Barker, who went on to be one of the most influential 80’s radio DJ’s with his On The Wire show terrorising northern listeners for many years. The venue all those years ago ‘The Lodestar’ did not quite have the dignified serenity of the King Georges Hall, the setting for tonight’s antics, and I doubt it had the same start time – 5.30pm!!

Not very rock ‘n’ roll, but I suppose if you are offering six bands then time is of the essence; however the tickets gave a start time of 6pm which probably accounted for us missing the first act Middle Finger Salute. Having missed them we then duly missed the second band The Guilty Pleasures; but arrived in time to see Canadian band Red Light Rippers. Prior to the gig I was a bit dubious about the next band, I’d visited their website and saw the tag ‘Too showy for punk rock, too rugged for glam, RLR are straight up, in your face, Kick Ass Rock and Roll’ and had listened to the audio section, bit too Hanoi Rocks for my own taste, and what’s with all these Canadian bands, the only decent bands to ever come from those shores being Skinny Puppy and Frontline Assembly. Bit confusing this lot; they look like a punkish Guns and Roses, loads of energy, and deserved a bigger audience, than the possible 70 watching. Apparently PLR are big in Canada which judging by the range of goods on the merchandise stall, clocks, mugs, etc is probably true, but their sound was just a little too heavy metal for most of the crowd. 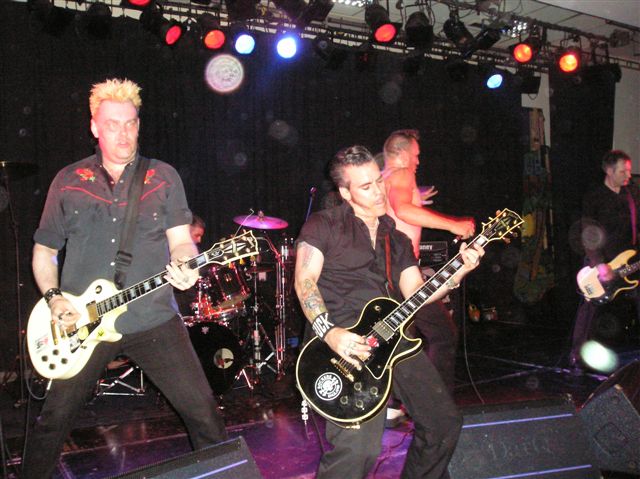 Next up and were still only at 7.30pm – Goldblade (pic above) took to the stage, in front of a crowd now swelling to perhaps 200, though in a venue that could easily accommodate 750 it still felt a little flat. The band opened with ‘Fighting In The Dancehall’ and suddenly it seemed as though we were in a small sweaty packed club, front man John Robb instantly connecting with the crowd drawing them in, backed by perhaps the most energetic currently touring. The current set includes the majority of tracks from the ‘Rebel Songs’ album, which really showcases this band at their best – sing a long anthemic blasts of pure punk energy. Tonight featured a full band with Big Norm joining as second drummer, which for two tracks allowed main drummer Brother Rob to engage in a spot of crowd surfing, not quite managing to outdo John Robb on the showmanship front, but certainly a spectacle. Other tracks, ‘Psycho’, ‘Strictly Hardcore’ and a short rendition of ‘Happy Birthday’ with your humble scribe stepping up onto the stage. Another storming set, from a band that consistently deliver, and despite the small crowd, seem to genuinely enjoy themselves, a fact not lost on the fans.

I had a few words with members of the touring bands who were able to shed some light regarding this tour, apparently the tour has been somewhat troubled, the first weeks headline act being Marky Ramone, backed with Anti-Product; seems Marky thinks he’s some sort of ‘rock star’ and dictated sound check times, refused to accommodate the various local bands etc so a bit of friction had developed. Would appear the friction had diverted to Glen Matlock, whose entire band had walked out on him prior to this gig – I did speak to him before he took to the stage, didn’t give much away other than to state he would be doing an acoustic set!! 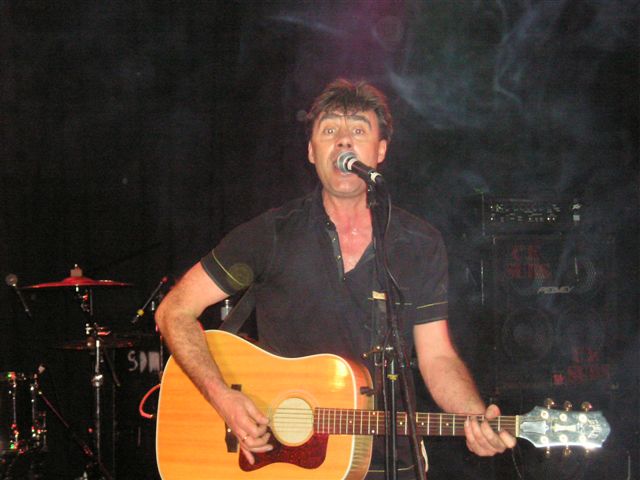 And so a lone Glen Matlock (pic above) strode on the stage, with an acoustic guitar at his side; hats off to the guy, took some courage and in fairness he just about pulled it off. I didn’t recognise his newer material but a rockabilly version of God Save The Queen and an acoustic ‘Pretty Vacant’ were a lot better than they first sound, also had a version of the old Rich Kids hit ‘Ghosts Of Princes In Towers’ The crowd certainly offered a warm reception which considering the set played no doubt Matlock was both pleased and perhaps pleasantly surprised. 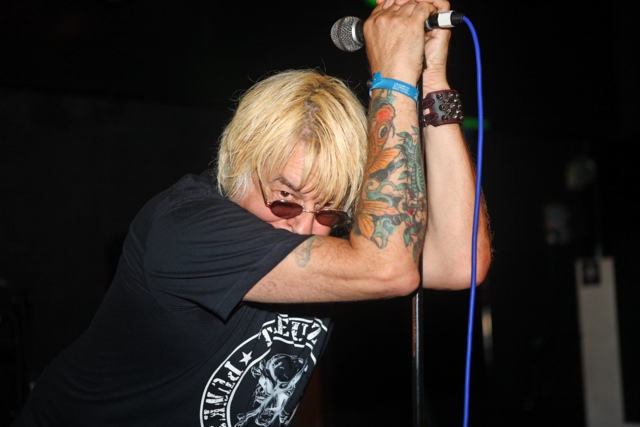 The UK Subs (pic above) had become headliners, due to the difficulties Matlock had experienced, and so when they took to the stage I set about trying to remember when I had seen then last. Now I reckon it was over 22 years ago, and guess what they still opened with the same song ‘C.I.D’!! To be honest I have avoided the Subs for all this time, they always seemed to have hit upon a formula and stuck to it, with very little to differentiate their songs from 20 years ago to now. Charlie Harper (pic below) actually looks better now than some pictures I saw of him 10 years ago, and he certainly set about his delivery with passion and energy; not lost on the crowd who immediately took to them and began pogoing and thrashing like their lives depended upon it. I’m not a fan but they have few decent numbers, the set mostly comprised of older material, it was nice to hear ‘Warhead’ once more.

Overall this was a fairly poor gig, and the fault rests solely with the promoter, the ludicrous start time, the complete lack of promotion – I only saw a single A4 poster in Blackburn all day, there wasn’t even a poster in the local ‘alternative’ record shop, the venue was fine, oversized but good and the choice of support acts such as RLR obviously did little to pull a crowd. Once more Goldblade easily outshone the other acts, virtually providing a lesson in how to ignite a crowd no matter what its size. This tour rumbles on for another five dates taking in such other ‘punk’ hotspots as Nuneaton, and Lincoln! I hope for Matlock’s sake he has made it up with his band, and for everyone else go and see Goldblade in their own right, a full tour is lined up in May, June and a live DVD is set for imminent release.