Party in The Parc, Colwyn Bay

END_OF_DOCUMENT_TOKEN_TO_BE_REPLACED

For the second week running now I biked the 3 miles to Rhyl, and more stupidly, the 3 miles home at midnight with no lights. Nearly hit someone on the cyclepath who had the same idea. You can just imagine the headlines: DRUNK PSYCHOPATH ON THE CYCLEPATH.

END_OF_DOCUMENT_TOKEN_TO_BE_REPLACED 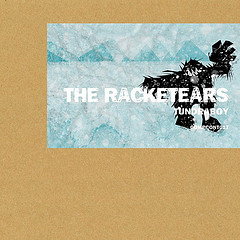 (Complete Control press release) – From the saliferous seaside town that brought you Timothy Dalton (the Welsh 007), Terry Jones (the Welsh Python) and Lemmy (the Welsh Ozzy Osbourne) come The Racketears, a bouncing bomb of a five-piece that’s set to rock your socks with brilliant debut single, ‘Tundraboy’.

A fascinating, melodic amble through the psyche of a young man from a humble habitatation, Tundraboy is a fresh, soulful three minutes from one of north Wales’ top bands.
The Racketears are one of music’s best-kept secrets. Imagine the Beach Boys and Joy Division in a tug-of-war, the winners get a Salford Smoothie. That’s the vibe you get when listening to the delightful Tom Edney (lead vox, guitar), Oli Jones (lead guitar), bass player Adam Wright, drummer Aidan Williams and enigmatic synth tickler Regan Sergent.

Edney’s vocals are crystal clear, the tone different, the texture dripped in honey and almost American in delivery, the raw energy and attitude is unlike most on this side of the pond. They are already ripping up a storm in Wales, now it’s time you were given a piece of the proverbial pie. (listen now)