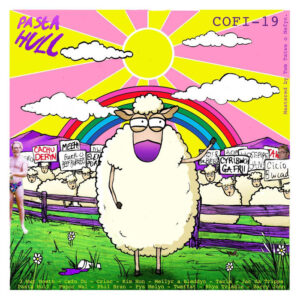 ‘Cofi 19’ appeared in July… And like most releases surrounding this arm of the Welsh scene, there was little fanfare… Yet, the content is fascinating, thrilling, superb and awful – sometimes in the same song. We kick off in a funk fashion with Kim Hon (Barry John!) who also feature later on with Talk To Frank, High and Channel Sbiw (you’ll learn that 27 is his highest score!). And there’s a smattering of anti-Westminster stuff, including the excellent Crinc with Crachach and the shit-hop Ja Da Trippa who spits the cool track Dirty Pee Ar MP.
Pasta Hull, with their skewed indie-go-funky-druggy sound feature predominantly on this album along with the completely anti-genre Pys Melyn who remain a thorn-in-the-side to the Welsh establishment (and anyone who listens to their headfucking output). END_OF_DOCUMENT_TOKEN_TO_BE_REPLACED