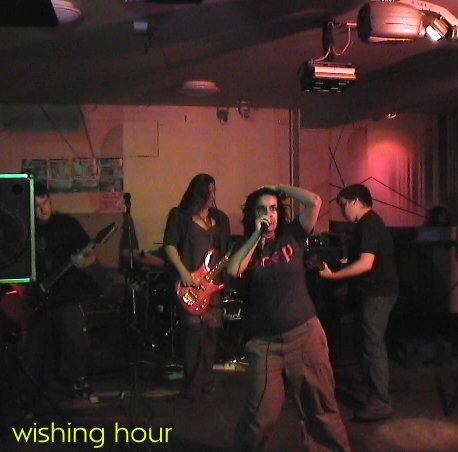 Sorry you couldn’t make it to the show last night. Unfortunately for you it was a show not to be missed, chance to see the elusive Wishing Hour in the flesh, a band that don’t play many gigs, record even less & put on one helluva show!
You see Adam, both you & I built this gig up & usually when that happens we’re left with egg on our collective chin as the billing doesn’t live up to our hype.
Thankfully the bands didn’t let us down this time & Bar Blu was buzzing with people by 8pm. Inner City Sumo are a very young band & only seem to get together at the end of term. The female singer stands there nonchalantly with thumbs in pockets & nothing to prove. They’re still finding themselves & hopefully realise that unless you’re a big band, then two acoustic songs in your set won’t work.
Knocking on Heaven’s Door; as Steve Sync quipped; ‘they should play Knocking on Bevan’s Door cos that‘ll be their next employer if they keep playing that fucking song, or perhaps Kip Kip Kipping on Kevin’s Floor.’
Regardless of the negatives, you can take home the original stuff Inner City Sumo played & see they do have lots of potential if they stick at it. END_OF_DOCUMENT_TOKEN_TO_BE_REPLACED