Hot Water from Bangor were a prequel to Fay Ray and listening to this single it takes you back to a time where everything was made of new wave and cheap PVC and we only had three TV channels.
Get Lost is a great spiky song – with Rezillos style lyrics and no messing about…
10/10

The B-side Birds Eye View is also on YouTube and described as ‘obscure female fronted rock’ – it’s slower than the flip-side and very Fay Ray and oddly enough, a bit 10CC – maybe that should read ‘oddly (and Creme).
END_OF_DOCUMENT_TOKEN_TO_BE_REPLACED

Tracks: Boxer, Back To The Beach, Motorway, Dark Fooling Man

Speaking in 2012, Annie said, ‘Had a band practice last night and three of us from Hot Water (Paul and Brenda) put our heads together and came up with some memories. We got the session after asking John Peel to come and see us playing in the Marquee. This came about because we played support to a band (name escapes us but will ask others) at Yale College in Wrexham and their gear didn’t turn up so they used ours and jokingly we said – give us a support spot at the Marquee – they kept to their word. We sent an amusing letter to John Peel telling him we’d lick him all over if he came to see us and left a big red kiss on the letter. John Walters produced it and Paul remembers him listening back to each track on a tiny little monitor – like a trannie. When the recording went out Paul was in hospital in Liverpool having a major operation next day and in instead of calling him Paul Stroud he was referred to as Paul Shroud which cheered him up immensely!’ 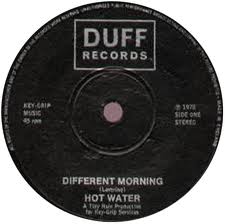