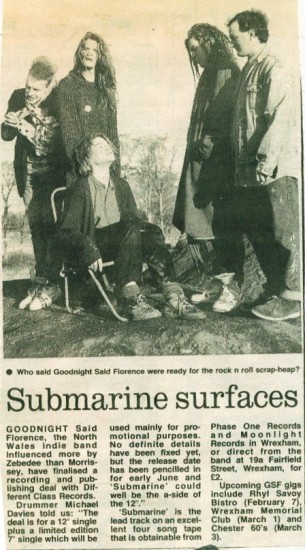 Sadly, on October 27th last year we lost John ‘Bugsy’ Williams. A much loved and very talented musician from Wrexham.

Bugsy played in several bands and appeared on several recording sessions. He is probably best known for being the quiet and unassuming bassist in early 90’s indie band Goodnight Said Florence. The band made some pretty big waves on the underground scene at the time with packed out gigs across the North and North Wales.

In 1999, Wrexham weirdo-punkbilly outfit Popeye’s Dik! released an EP ‘Country Smokin Blues’ on which Bugsy played bass and was the producer.

A cassette has been released to celebrate his ‘official’ recorded appearances, with two tracks from Goodnight Said Florence’s 1991 12″ single and a track from the Popeye’s Dik! EP.