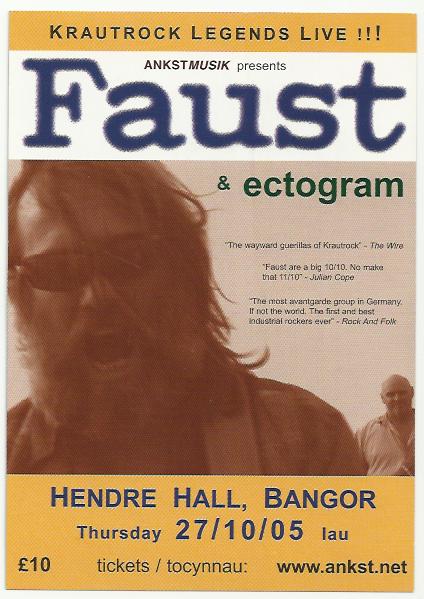 (taken from Adam Walton‘s blog)
Tony, Soundhog and I went to Hendre Hall that night to see Faust and Ectogram. The venue is amazing. It’s a very old, split level barn that isn’t – really – wide enough to be sticking bands on… well not bands with members of not inconsiderable girth… and both Ectogram and Faust have members with gloriously prodigious waistlines. I don’t feel so bad about my plasticene tummy now.
END_OF_DOCUMENT_TOKEN_TO_BE_REPLACED

Krautrock maestros Faust play the Tiv in Buckley.
The gig was orchestrated by those psychedelic vaporised anti-dance merchants Ectogram from Bangor, who gave away a free cassette to gig goers, …previews and seaviews from the (then) forthcoming release “Spitsbergen”. This 23 minute impressionistic collage contains some extracts which subsequently were not included on the finished release, making it a much sought after rarity!