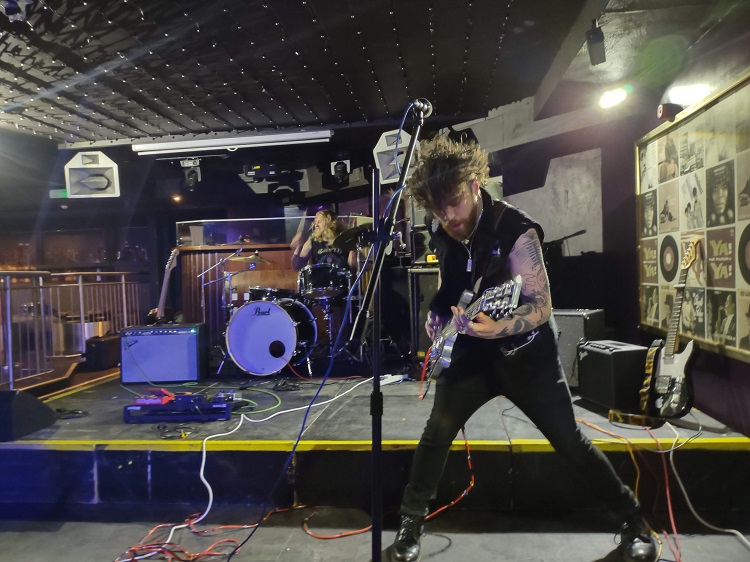 They’re made of tough stuff in Rotherham; either that, or they’re bonkers (probably a bit of both). Bodach took the perilous 2.5 hour journey from South Yorkshire to land in Rhyl on this Thursday.
‘It’s life Jim, but not as we know it.’ – This is true, as many of us are still taking tentative steps out into the broadly unknown. Strange new worlds and civilisations beyond the safety of our four walls and our social media portals. Fuzzed Up is run by that pioneer Steve Rastin and The Late Lounge was once Bar Blu, home to hundreds of gigs throughout the 2000s.

Seasons change, people change, demographics change, venues change (Rastin stays the same) and Bar Blu (eventually) became The Late Lounge. With the change, the venue itself transformed into this cool place, with cool decor, a great stage and great sound. We used to endure the sound in Bar Blu as bands fought with the PA to try and get a decent sound, here Bodach plugged in and blew us away.

A Bodach is a Scottish peasant or a ghost (whichever dictionary you read) and you’ll find a couple of these in the rough end of Rotherham. Here they exist in a sludge filled gutter. Bodach make ends meet by joining riffs together to ward off evil spirits. For a two-piece, Laurie and Tom stamp on the footprints of other duos like Riggots, I Am Austin, Dollar and make a huge noise. We watched with guitar envy and marvelled at the sonic assault happening before us. Take their song Ruiner as a fine example, on Spotify it’s ace… in the flesh, it’s immense, riff laden like Baltimore Gun Club and very Sabbathesq, which I’ll take all day, every day.