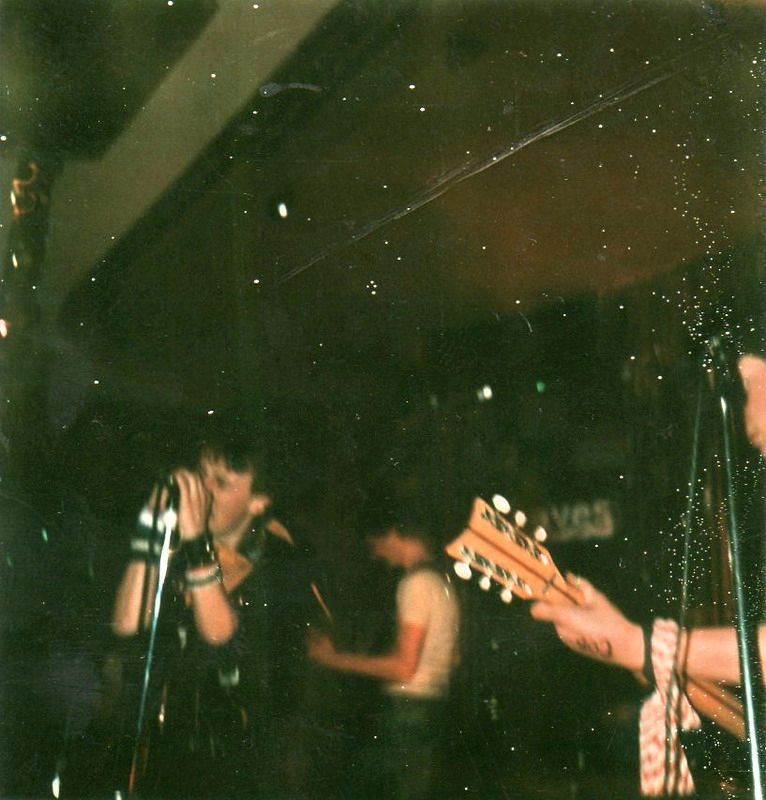 Soldier Dolls – punk band formed 1981, feat; David ‘DKA’ Alderman (gtr) (ex Blast Off, Animation, later of Slow Jam, I Mobster), Andrew ‘Fester’ Mae (voc) (ex Animation), Bob ‘Slow Bob’ Humphries (bass), David ‘Evvo’ Evans (drms) (ex Animation). This line up stayed together until 1983 when Evo and Bob left to play heavy metal. (Evo went on to drum for Rankelsen and rel a few LP’s), Fester and DKA were joined by Jamie Richards (bass) and Matthew ‘Morph’ Gray (drms) (later of Fenella Fielding, I Mobster, Slow Jam, Darling Buds). Jamie left in 86 just before A Taste Of Blood EP was rel, so Fester took over playing bass and singing for a few months then the band split. Rel 2 tapes; Ten track Sampler and From The Cradle To the Grave and two EP’s What do they know and Taste of Blood (#13 in the HMV indie charts). In 2002 Fester and Evo rec a load of old Dolls songs in the hope that it would inspire the others to have another go, the band almost did an impromtu set at a jam night in Cardiff, but time was against them as it was the 1st time all 4 orig members were in the same room together for 19 years. Soldier Dolls singles fetch a good price on Ebay. Fester lives In canada, Evo in Spain and DKA in Paris, the others still live in and around Cardiff. 2004 saw the publication of the book ‘Burning Britain’ by Ian Glasper which inc the Dolls and resulted in a renewed interest in this overlooked punk band. The orig members decided it was time to re-record some of the unissued back- catalogue. (website)

Son Capson – Aberystwyth based off the wall project (c2009) (website)

Spirit of ’86 – label of that year run by Hue Williams (of Pooh Sticks). More info req’d.

Spitfire Boys – band (c1978) likened to the Only Ones. Only rel was 7″Funtime. Were orig based in Liverpool, but vocalist Dave Littler moved to Cardiff and used The Nylonz as his backing band.

Spookers – an electronic/guitar instrumental band based in Cardigan, feat; Gavin Lloyd Wilson (see also Spurious Transients). Have been experimenting with incorporating the spoken word into their music, working alongside poet Dave Urwin. During 2014 Gavin played several gigs with the internationally renowned psychedelic band Sendelica, playing bass (standing in for regular bassist Glenda Pescado) and rhythm guitar (appearing on the track “Maggot Brain” on the album “Live At Crabstock”).

Spoonful – 60’s Cardiff based outfit infl by the Eyes of Blue, feat; Steve Finn (voc), Mike Blanch (keys), Bob Reynolds (drms), John Harbottle (bass),  Mike Lloyd Jones (gtr) (later of Universe and Ingroville). A very popular blues band their act often consisted of breaking several hundred old 78rpm discs over each others heads, very droll. After furthering his career as an Insurance Sales man for the Co-op, Steve retired but still sings and plays guitar in public. However, he tends to perform in

Spurious Transients – project from Pembrokeshire in experimental/avant garde music by Gavin Lloyd Wilson (also of Spookers). Orig formed in 1986 but have had an on/off existence from then until 2012 when new recordings and record company interest gave the project a new lease of life. Self-released album Nov14 having split from record label following differences of opinion concerning marketing. Exhibits strong “krautrock” influences from legendary German bands such as Neu!, Faust, Can, Cluster, Harmonia and Kraftwerk. Fusing elements such as motorik rhythms, Eastern-flavoured drones, soaring EBow guitars and sweeping synths, the music encompasses driving up-tempo numbers through to those of a darker more ambient texture. Incidentally, the name Spurious Transients was inspired by a recalcitrant drum machine.

Statues of Us – Cardiff-Llantrisant band (1985-92) evolved from The Bulbs, feat; Mike Kennedy (bass) (now involved with Germ Corporation), Boyd Clack (gtr,voc), Clive ‘Twink’ Trevelyan (voc,gtr); Mark Jones (keys), Martin (drms) (from Shrewsbury). Numerous personnel changes saw Dave & Hilary (gtr,voc), Kevin (gtr), Neil White (gtr,voc), Sue McGarr (keys), Stewart Lucas (drms). The band performed material entirely written by Twink, Boyd and Mike, and arranged by members of the band. They gigged fairly regularly (mostly in Cardiff but occasionally in Llantrisant) and gathered a dedicated following in the process. Rel dble A-side single on their own Revelation Recs, (Doomsday is Coming / Plague in Paradise) but sold very few copies – although it was a firm favourite on the jukebox in The Cross Keys, Llantrisant for a couple of years. Unfortunately, Twink was diagnosed with Leukemia in the early 90’s and was forced to curtail his musical activities and the band went into permanent retirement. He died a few years later from his illness. (website)

Steps – Port Talbot band (Jan88-92) (orig formed as GPI in 1977, then changed name to Reactions, then 39 Steps), feat; Pete Watkins (gtr,voc), Mike Morales (drms) and Colin Baker (bass,voc). Baker departed in late ’89 being replaced by Mike Andrews (bass,keys). Andrews only lasted a year before leaving. Paul Needs (ex GPI, Reactions) returned on a temporary basis to allow the band to honour some pre arranged gigs in ’91. (Not to be confused with shite 90s pop band of same name!) The halcyon years are recognised as being 1986 thro’ 1990 probably better know as live band with a healthy live following on college/uni circuit in Wales and South of England the late ’80s. But the band still managed to acquire a number of prestigious radio session during this period, incl Radio 1 and Red Dragon, however they never quite managed to make the big break despite regular playing big gigs in Bristol (The Fleece and Firkin is a venue they became inextricable associated with) as well as playing gigs at the Fulham Greyhound and Tunnel Club London. Watkins collected the studio recording of the band on the 1999 CD “Madness in my Method —, Pete Watkins feat the Reactions and the Steps”. 2007 will see Rialto Recs rel the long awaited 18 track live anthology  called “The Anthology of Recorded Events – The Steps 1987 – 1991” The collection is remasterd by Andrew Sandoval and produced Russell Smith. Peter Watkins intends to do a number of solo acoustic gigs in support of the CD.

Stereos – Fronted by Alan Collier, this band based in Pontypridd played in the South Wales area during the late 60’s. They played mostly Stax Sound stuff and did it quite well. Alan Collier was a talented vocalist and should have gone on to greater things No further information is available on band members after the split

Sting Like A Bee – Rhythm and Blues band formed by transplanted American, Steve Power. Many personnel changes over the years featuring the cream of Welsh musicians including Mickey Gee, Graham Williams, Tich Gwilym, Pete Matheson, Jack Bass, and Dave Watkins. The ultimate core lineup of Bob Watkins, Paul Westwell, and Vince “VZ” Thomas was also the most successful, recording the self titled album “Sting Like A Bee” in 1990 with producer James Morgan (Stan Webb’s Chicken Shack). Disbanded in 1992 with the departure of Bob Watkins to Shakin’ Stevens band and Paul Westwell to Southwest Region Coordinator for the Musicians Union.

Stone Idol – (May69-Mar71), progressive Penarth jazz/rock band (akin to Collosseum and Emerson Lake and Palmer). Feat; Adrian Angove (bass,voc), Ian Thompson (Baritone Sax) (later Good Habit), David Bush (drms), Ed Griffith (keys), John Roberts (Tenor Sax) (later Good Habit) who all used to be in Nite Time Pipeline. This band was unusual in that it had no guitarist with all solos being taken by either Saxophone or Hammond Organ. Turned professional (Nov69) & toured Germany and Switzerland extensively. Backed Johnny Johnson and the Bandwagon on a nationwide tour (Jan-Apr70), after which Thompson left. In May70 Willy Blackmore (gtr) (ex Nite Time Pipeline, Pony Express) and Phil Evans (voc) who is the younger brother of Badfinger’s bassist Tom were added to the line-up. John had followed Thompson by Jul70 & a month later Charlie Barber (voc,keys) replaced Phil who went onto be in various Swansea bands. Charlie’s stay was short lived and Lynn Phillips (voc,harm) (later Kimla Taz) replaced him by Oct70. John Ingroville came in for Lynn in Feb71 & the band became Spike a month later.

Stony Broke – Once described in the South Wales argus as a tight cabaret punk outfit. Formed 1991, originally from the ashes of The Belly Up Blues Band. feat; Butch Waters (voc,gtr) (ex The Effect), Tom Grace (drms) (ex Blind Parade), Dave Pope (bass) and sometime ex jazzer Dave Powell (gtr,voc). Butch went on to other things in 1993 and was replaced by Timmy Gough (gtr) who also played with Hobgoblin throughout this period until 1999. Theo (ex Dirt, Blind Parade, Final Act) came in 1995 on vocals. Richie Dinning came and went on gtr (2000-2003). Predominantly a covers outfit but but still do sets of own material. Led from the front by the unpredictable but always entertaining Theo (aka Terry Theobald). 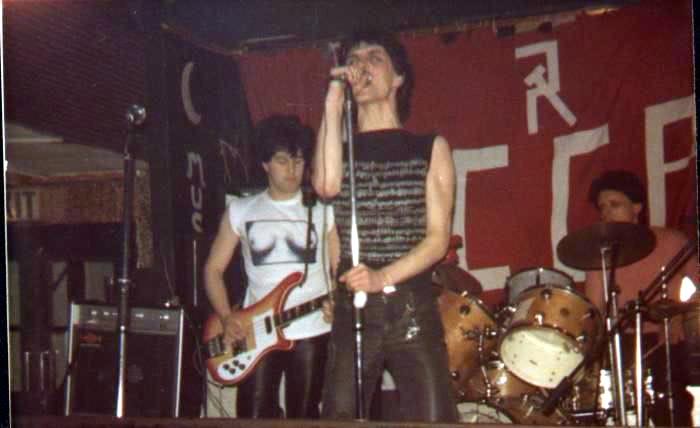 Swn – Festival held in Cardiff, similar to Manchester’s ‘In The City’ but without the music industry arse-licking.

Yn Syth O’r Rhewgell – fanzine from Brecon (#1 Apr85) (means Straight From The Freezer), I believe was produced by David and Pat of Datblygu. (source)