Page 3 – Swansea based porno-punk band (c1979), feat; Ian Bone (later Living Legends), Ray Rockafella (voc) (also Dyfatty Flats), Jock Negative (voc,stripping), Jon Smythe-Murray (sax), Mr Miers (gtr), Huw Pew (drms), Gags (drms) and many others. Played 2 maybe 3 gigs, the first of which descended into chaos when 2 females joined the band naked on stage and rolled around on top of each other. Songs included Sexist Twat, Bitches on Heat, Premature Ejaculations, Swallow it Down, Can’t Get It Up, One Of The Boys, Clap Clap I Wanna Get The Clap, Prostitutes World. Andy Green, who promoted gigs at Swansea Uni said in a 2007 interview, ‘I foolishly put on a punk band called Page 3, in what was to be their last-ever gig – whose members were to become the anarchist agitation group Class War. This band included a lady of ill repute involved in the so-called ‘sex for luncheon vouchers scandal’ in the ‘70’s. Their act included doing rude things with jelly babies and feeding them to the front row of the audience. It got worse: the night ended in chaos with police and fire brigade called out, the College Safety Officer beaten up, and my dear mate Bertie Mathews getting thumped. My abiding memory is when cleaning up the mess at the end of the night. This big Welsh guy stood in the hall with his posture indicating he was going to make some negative pronouncement but declaring, in his broad valley’s accent: “Smutty, but good!” I learnt that you can at least please some of the people some of the time!’

Pale Angels – loud, dirty guitar band from New Jersey USA, feat; Jamie Morrison (ex-Arteries from Swansea), they use a stateside drummer to tour the USA and another to play in the UK. Rel their 3rd LP ‘Daydreaming Blues’ (Nov16 on Specialist Subject) (website)

Paul – Solo multi instrumentalist, who self rel most of his material on cassette inc ‘War Crimes’. Based in Cymraeg, Dyfed. Active up until 1982/3 (?)

Lisa Pedrick – pop singer from Gwaun Cae Gurwen, most famous for beating a then unknown Duffy to win Wawffactor in 2004 (a Welsh pop idol TV prog – and just as shit). She went on to be a music teacher and rel material inc; LP ‘Dyma’r Amser’ (on Rasp 2008) which was produced by Henry Priestman (The Christians) at his studio in Anglesey.

Permissive Society – Cardiff based group active during the early 80’s. Initially rel the single ‘Social Misfit’ on iod/100 Recs, this was followed with an LP ‘Permissive Age’ also on iod/100 Recs

Petrified Recs – Label started by James McHardy and Emma Ross (formerly involved with Topper, Melys websites) released an EP (2001), Single (2002) and Mini-Album (2003) by Nameless and the album Unspoken by Fractured Persona (2005) in which all profits were donated to Ashgrove School in Penarth to help raise funds and awareness of children with Autism.  (website)

The Phantom Light – ambient/shoegaze band from Swansea (formed Oct09). The band went through a number of changes but the longest serving line up feat; Anthony Jones (voc) (now Frisbees In The Fog) Jason Jones (gtr) (ex The MP’s), Simon Jones (gtr), Ed Purcell (ex Salad Days) Matty James (drms) (now Cities) and Shaun Moseley (Keys). The Phantom Light released a two track demo in early 2010, which got the band through to the last 12 of the Glastonbury Emerging Talent competition, where they played their first ever gig to the organisers, Michael & Emily Eavis. They later released the 5 track digipack CD ‘Sky Lanterns’ in 2013 before embarking on a UK tour. Whilst recording their debut album they split up in 2014, although 6 of the finished tracks were released digitally in 2015 as part of ‘The Fall EP’. (website)

Picture Frame Seduction – Hardcore punk band formed 1979 in Haverfordwest. Feat; Keith (voc), Mark Bozier (gtr), Griff (drms), Steve Arthur (bass). Rec single Im Good Enough For Me on Solar Sound recs (Lampeter 1984) and LP- Hand Of The Rider (1985 on Rot Recs). 2nd single Try With A Little Help (1987 PFS Recs). Also rel tracks on comp LPs Demolition Blues (1982) and A Kick Up The Arse (1986). Gigged extensively throughout the UK with Uk Subs, Partisans, GBH, Exploited & Peter And The Test Tube Babies. Ceased gigs and rec in 1987 after headlining the 100 club with The Varukers. Reformed in 2003 with live CD planned on Locozo Recs for Jun03. Mark Bozier the bands guitarist on most of the vinyl recordings died in 1990 at the age of 26 from a heart attack. Rob Folland joined 2003 as replacement. Rel LP Jan05 ‘Sex War’, then ‘Stop The Bloody Slaughter’ (Nov06) and split CD ‘Skateboarding Down Merlin’s Hill With Penny Harry’ (with True Sounds of The Revolution) which was a BBC Radio Wales session that was never aired. (rel Feb07) (website) Also known as The Frames, PFS

Pincushion – Pop-punk-metal Rhondda band. Formed in 1998-ish after Anthony ‘Thonoir’ Hallem offered to buy both Gareth ‘Westy’ Westwood (voc,gtr) and Mathew ‘Acy’ Acreman (bass) a pint of Guinness each – on one condition:- if he could be the drummer in their band. Rec demo in Grassroots early 99, incl; live favourites, ‘Number One Fan’ and ‘Crypt‘ (which were aired on American college radio). Upon hearing these tracks, the then-redundant guitarist Dafydd L. Williams (formerly Claypool) insisted on joining the band. Rec again in spring 2000 in Immtech – this time a slighly more ambitious 6-track mini-album in 2 days. Played their last gig in May00. Dafydd formed Panel within about a week, and Westy and Acy formed Jeff the Dentist a few days later.(website) 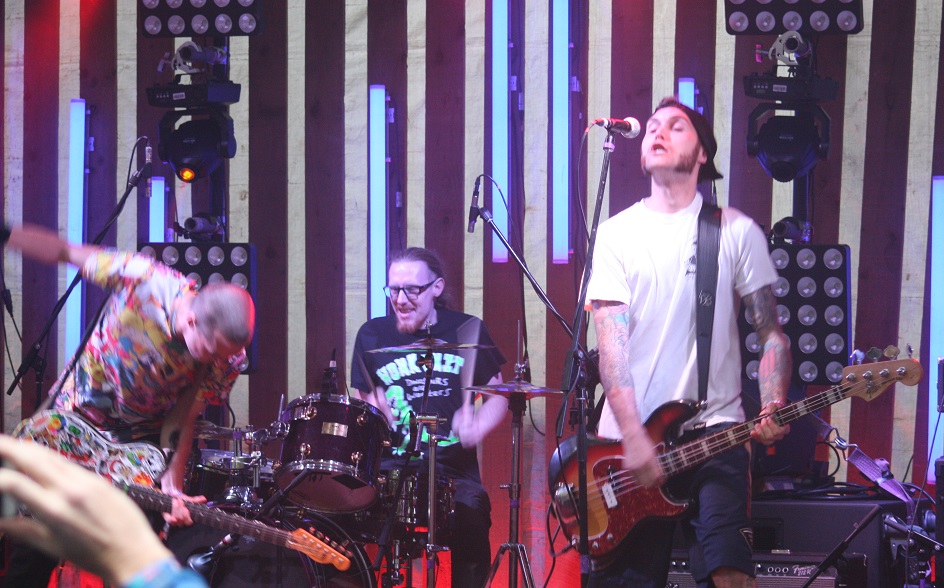 Placid Casual – record label based in Cardiff set up by Super Furry Animals (1998) before they signed to Sony. Rel their own ‘Mwng’ LP, and had a clause in their Sony contract allowing them to rel output on other labels, hence Gruff Rhys‘ debut solo LP ‘Yr Atal Genhedlaeth’ and SFA’s ‘Phantom Phorce’

The Pocket Devils – Swansea-based band (1996/7), who rec one single (Walking on Water b/w Take Me Away) for Pop Music Recs (cat. no. POE 001, Feb97). Feat; Jonathan Owen (v), Darren Hamer (drms), Christian Farrant (b), Abby Hanson (g), Chris Davies (k), “plus additional groovy percussion by Kofi”. Music described as “a cross between pop and indie”. A track was also reportedly incl on an American comp album. Supposedly, the band also supported INXS on a UK tour and was managed by Paul Dixon of Hi Speed Management.

Pretty Grim – Brecon based Psycobilly band feat; Paul Nevin (dbl bass,voc), Jim Thomson (gtr), Henry Vaugn (drms) plus many others. Demo of 3 recording sessions (May99, Sep00, and Feb,Mar02) is available, incl cover of
Madonna’s Material Girl. Played with the Dead Kennedys during the Mutiny On The Bay tour.

Simon Price – music journalist with Independent on Sunday (until 2014) & Manic Street Preachers biographer, writer of Everything (A Book About MSP). Jan 02 – Had a dispute with Virgin Books over a deleted chapter concerning Richey James. Orig from Barry, now resides in Brighton (twitter)

Probation Recs – label based in Tonyrefail (2004). Have rel singles by Next Nine Years, Pete’s Sake as well as the ‘Sick of Silence’ comp LP. (website)

Probing Holes – Monmouth punk band (formed 1978) orig feat; Nigel Howard, Shane Corbett (gtr) and Richard Fry (drms). Went through several different names inc; The Drains and Monmouth Morons. By mid-1979 they settled on The Probing Holes and Nigel had gone and in came Rupert Vanderval (gtr), Chris Sid Morgan (bass) and Bernard Rowlands (voc). By the end of the year Chris and Richard gave up music and Shane left to join punk band Funeral in Berlin. Rupert and Bernard were rejoined by Nigel (gtr), Steve Wadley (bass), Phil Goodridge (drms).  They went to london to record a 3 track demo, which inc self written songs, Sign Here Please, The Signal and a cover of The Ramones’ Blitzkreig Bop, later the orig songs appeared on The Beat The Meat comp LP (Xsentrik 1981). Shortly after that Steve left to join the army, Bernard gave up singing and Shane rejoined the band, this was to be their last and most prolificly successful line up and they were all no more than 18 years old. Many gigs ensued, Sign Here Please was played by John Peel and they were mentioned in Sounds magazine. In 1981 a demo was rec for Round Here Recs and after German radio play they were offered dates in the country but at this point Rupert decided to quit the band for a different music project, shortly after they split for good in 1982. 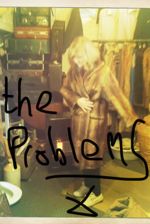 The Problems – project from Ton Teg and Birmingham! Feat; Amy Mcgovern (voc,drms), Twig Owens (voc,gtr). Debut gig at Adam and Eve, B’ham (Jun12). Twig says, ‘It’s about a year since we played our first show in Birmingham and we gained a following there quite quickly. We then headed out on tour with The Twang and got to play some cool venues. The Leadmill, Scala, Manchester Ritz and O2 Academy. We been recording since and these are the fruits of that.’ (website)

Procrastinatrix – minimal-electro project based in the Brecon Beacons (c2022) – (bandcamp)

Pseudo Sadists – punk band from Swansea (early 80s). Feat; Huw ‘Iva’ Morgan (voc), Nicky Hook (drms), Greg Evans (bass) (ex Autonome), Richard Griffiths (gtr), prev called Pay Day. Appeared on A Country Fit For Heroes Vol.1 LP with a song called “Power Schemes” and contributed another called “War Games” to the Bullshit Detector Vol.2 comp. Iva was top punk in Swansea – used to walk around with a goat on a string! Later moved to London and became famous as the ‘acid priest’: he wore a vicar’s collar and was the main source of LSD and cocaine for the entire London music scene. Had a motorbike with the numberplate ‘LSD 64’! Did some time in the Scrubs, not surprisingly.

The Psychodelic Daisies – (1970), A flower-power style rambling improvisational outfit with a heavy rock beat and wailing vocals. Piano player Steve Parr would later join Ingroville (and London based album charting performance rock act Burlesque) before establishing one of the most successful London recording studios (Hear No Evil), winning several BAFTAs and OSCARS for his film music production in recent years.

Psychos – promoters of the Monkey Café in Swansea, run by Dave Sedley, began in 1999

Pynci – PYNCI (Promoting Youth Networks in the Cultural Community) A community based record label designed to give opportunities to bands, singers, Djs, musicians, producers who have been part of the Government ‘New Deal’ scheme for musicians.