Fallen Heroes – A5 punk fanzine started in early 1999 as a newsprint going out every month, but after 6th issue, it went into the big time (#15 Oct02) with 60 -70 pages. Features indepth innterviews with the likes of Good Clean Fun, Stretch Armstrong, Youth Brigade, SNFU, Small Brown Bike, Capdown etc. Editor J has also contributed to other zines across the country, writing coloumns n’ stuff.

Family Affair – BBC Wales series made in 1998.Three rising bands of the “Welsh Pop” era where exposed in a show about bands whose parents had also been in bands. The band feat, in order of orig transmission, were the Stereophonics, Melys, and Ether.

Fawn – 2002 is Newport based Meirion Lewis’ electronic project. Had a track Glisten feat on Sessions in Wales radio.

Fflach Recs – Cardigan based label initially set up as an outlet for punk band Ail Symudiad by band members & brothers, Richard & Wyn Jones. After the band split the label expanded to take on artists as diverse as punk rock to Welsh choirs. Also run an indie spin off label Rasp (website) 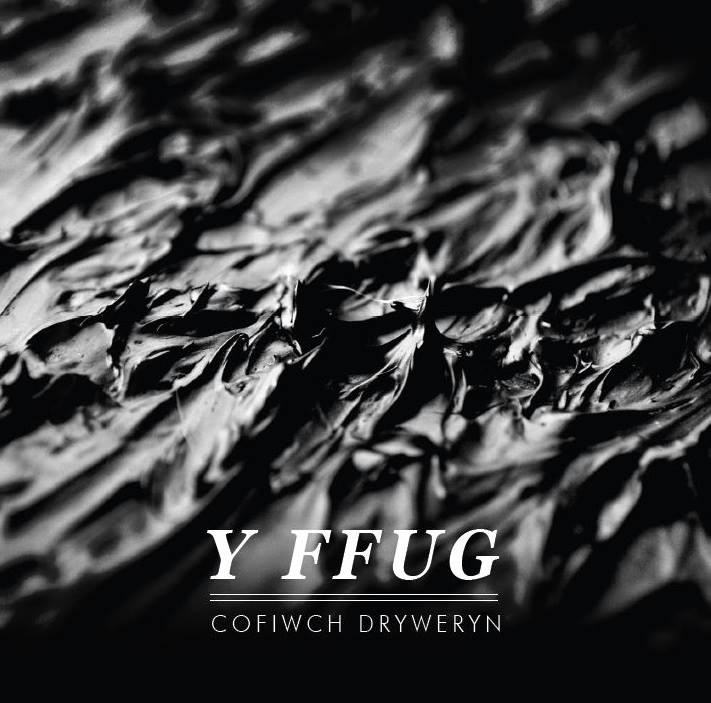 Five of Diamonds – band (formed 1960) feat; Colin Mackey (gtr), Ken Gregson (voc,gtr), Mervyn Dodds (bass), Terry Stephens (drms), Owen Wiliams (voc). Ken says, ‘We played the clubs and dance spots all over S. Wales, then took off to Germany as part of The British Musical Invasion, playing the City Tanzdeil in Krefeld to the ‘o Drop Inn at the US Army barracks in Bad Kissengen. We came back to Wales and eventually split up.’ Ken went to the Middle East, and then California where he now sings with Kaleidoscope (an acapella group).

Flaming Youth – Newport band, formed 1973, feat; Joe Strummer (later of The Clash), who found the band drummerless, so he offered them his drumkit in exchange for letting him sing for them. Changed name to The Vultures

Flemgods – Newport punk band (formed 1988), feat; Dan Romer, Simon Wallet, Tim Hobbis who met at Newport Art College, Jim Kent (drms) played early gigs at TJ’s and Chapter in Cardiff but was replaced by Dave Cox (ex Belgians – not to be confused with namesake from N.Wales). Demo rec 1990 and band signed to Bristol’sPlanet Records 1991. Rel EP ‘Bison Carcass Earstrike’ (1992) and LP rec 1993 ‘A Nauseous Aural Experiment’. Got distribution through Timebomb in Japan and the EP did ok there. John Peel played it for a few months and had a bit of airtime on various South Wales radio shows. Planetfolded soon after and the album master tape was then given to Alternative Tentacles, being handed to Jello Biafra himself. Tracks from album were given to various European comps in France, Germany, Holland etc. Tim says, ‘A few were released but forget where and when except My Ears My Ears 1994 from France where Flyscreen (from Newport, signed to Geffen) also had a track.’ They supported the likes of The Lemonheads, Lunachicks, Sebadoh, The Jesus Lizard, Shudder to Think, 60ft Dolls, Flyscreen, Dub War/Skindred, Cowboy Killers, Shampoo etc with Dean Poole filling in on drums when Dave was away for various reasons. Tim continues’ ‘The album was never officially released but I’m in the process of getting artwork together just to throw some copies out there.’ Also feat on Frug Recs’ 1994 comp ‘I Was A Teenage Gwent Boy’.

Flying Brix – Cardiff band feat; Joe. Rel Black Colours (1982) a ltd edition 9 track 7″ E.P that was played by John Peel (BBC Radio One), and now highly regarded as a classic of its ilk and sought after by DIY connoissers worldwide (currently valued at $50+ on the intnl market). Renditions of Joe’s later original songs rec by The Flying Brix new line-up at Rockfield Studios, rec’d critical acclaim from like of Melody Maker. More info req’d.

Four Letter Word – Cardiff punk band (formed summer 91); orig line up feat; Welly (voc) (editor of Artcore), Kip-Xool (drms) (ex Heretics, Cowboy Killers, later In The Shit, Da Capo), Chris (bass), Jake (gtr), Jon (gtr). Jake quit and moved to London in 92, Chris left in ’94 replaced by Dog. Rel split EP with Spite in 1996 and toured the UK. Dog and Kip quit after the tour, replaced by Will (drms) (later Fishtake), Hairy (bass). Rel 2 albums out on BYO Recs of California ‘A Nasty Piece of Work’ (1997), and ‘Zero Visibilty’ (1999) left BYO after a legal wrangle with their name & an American boy band. Toured the States to promote the LPs, but lost Dog allowing Tim o’Donovan to step in. More line up problems, losing both Will and Tim led to cancelling a European tour at the end of ’99. Wedge (drms) (ex Classified Protest, Rectify) and Tom (bass) (ex Aspirin Kid) filled the vacancies. Continual touring led Jon to leave in 2000, and Bristol based Neil (gtr) (ex Shutdown). Rel ‘A Cold Day in Hell’ (Suspect Device Recs ’01). Neil quit in the summer and fellow Bristol native Matt (gtr) (ex Spartans) joined. In 2002 more line-up problems when Wedge and Tom quit leading to a ‘year off’. By Jul03 they were rehearsing again with Jon Swain (drms) who quit after 2 gigs, as did Matt. Chris Murphy (drms), Dave Beer (gtr) and Dave Millinship were added to the line up and they rel ‘Crimewave’ (Newest Industry 01.05.04). 3rd LP ‘Like Moths To a Flame’ (Newest Industry Jan05). Welly split the band at the end of 2005 to run his Damaged Goods record shop, but by 2007 he had teamed up with Wedge and orig guitarist Jon and added Gob (bass), Nick (gtr). Rel EP ‘Staring Down The Barrel’ and toured the States again. Then rel ‘Invitation To A Hanging EP’ (01.05.10). Gavin (of Who Are The Monsters) has also been in the lineup (website)

Fractal Smarties – West Wales band, feat; Chris Andrews, Claire Walker, Luke Morris and John Atterbury. They met whilst enjoying the West Wales club scene, they put all their tastes together and formed a band, they have now been writing music together for 18 months.The latest demo they have rel on the much respected Pynci label shows that dance music is still alive and kicking, the single is called ‘Fractal’, and came in 7″ and a 12″ versions. Their influences on this seem to be Underworld and the Bristol sounds of Portishead.

Fracture – fanzine edited by Cardiff’s Dave Hopkin (ex Mad Monks editor & runs Assembly Line distro & Newest Industry recs) & Yorkshire based Russell Remains. Began in 1997 & stopped after 25 issues in 2004 after they got fed up with bands & companies expecting good reviews & going off in a huff when they didn’t. (website)

Frames – 70’s Cardiff band who had a spotty faced singer called Gary Stockford, Chris Brazier (drms) (ex Zipper, Nylonz), Phil Celia (gtr), also feat; Jonathon Griffiths (ex Side FX). Chris remembers; ‘We won a battle of the bands in the rank in the late 70’s and I had my Ludwig snare stolen (sour grapes).’ Phil went on to a little fame and fortune with a boy duo who had a single called “Cry” .

Freur – Cardiff band, formed 1981 by college students Karl Hyde, Rick Smith (both ex Screen Gemz) and Alfie Thomas, with drummer Bryn Burrows (ex- Fabulous Poodles) joining later; (his party trick of banging his head on his cymbals once led to him being carried offstage totally unconscious) and video guru John Warwicker. Signed to CBS Recs in 1983 and enjoyed a minor chart success with the LP (re-rel 1999) & single ‘Doot Doot’. Its popularity was made all the more unlikely by the fact that their record company had issued the original demo version rather than the recording the band had made with Conny Plank and Holger Czukay in Cologne. The record was also a big hit throughout Europe and topped the Italian charts. Rel further 3 sngls in 1983 – Matters Of The Heart, Runaway, Riders Of The Night. Followed by The Devil And Darkness (1984), Look In The Back For Answers (1985) & The Piano Song (’86). A second album (‘Get Us Out Of There’) was withheld from release by CBS, after which Smith and Hyde left to form Underworld with Baz Allen,the rest, as they say… is history

Frisbees in the Fog – post rock/soundtrack/shoegaze project based in Swansea. Fronted by Anthony Jones (ex The Phantom Light), Frisbees is the name used by Jones for the music he uses for various film projects, although a collaborative album feat various musicians is planned for 2019 (website)

From This Moment On – Abergavenny straight-edge hardcore band managed by Johnny Philips of Sick Future promo. Rel split EP with Funeral For A Friend

Frug! – fanzine from Newport (up to 1995), ran for at least 11 issues, edited by Andy Barding. Noted for its good presentation. Also a label that rel the comp LP ‘I Was A Teenage Gwent Boy’ feat Cowboy Killers, 60′ Dolls amongst others. More info req’d. 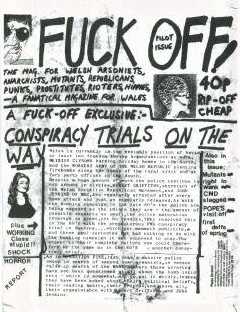 Fuck Off – fanzine published by Ian Bone (Jan82), which he described as his ‘Fanatical magazine for Wales’. Aimed at ‘Welsh arsonists, anarchists, mutants, republicans, punks, prostitutes, rioters, hippies,’ it was a conscious attempt to draw together some of Wales’ more exotic non-conformist elements. Speaking in 2006 to Babylon Wales Ian said, ‘I have a residual affection for Fuck Off among the glittering pantheon of mags I’ve produced. At the time I was in touch with the hippie Mutants from west Wales, the Welsh Republicans, and a lot of the Class Whores who were originally from Swansea… so a mag bringing them all together seemed natural. #2 (never produced) was to have a big feature on the Silent Twins (June and Jennifer Gibbons) who petrol-bombed their way around Haverfordwest. (see also Class War) 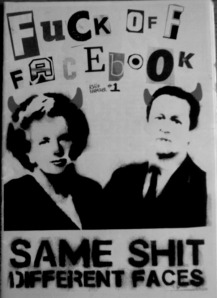 Fuck Off Facebook – bilingual fanzine based in Cardiff – first published in March 2011 and by June 2014 working on their 8th issue. Put together by Steffan Cravos and Efa Supertramp and the Afiach Collective. Damn good anarchist zine filled with radical venom, cultural humour and topical issues. Also cover bands and reviews. Funded by donations. (more info)

FUOD – (short for fucked up on drugs) 9-piece Aberystwyth funk band who’ve been gigging in the area since 1996. (website)

Fur Lined – 1993-1996 London based frilly shirt wearing fop rockers featuring Jon Tregenna (gtr) (ex Cwestion Da, Tan Tro Nesa) and Ian Mansel-Thomas (bass) from Llanelli together with Dale Olivier (South Africa, voc) and Laurence Ash (Gloucester, drms). Caused a stir with their first demo, ‘Do How I Feel’ (1993) which led to a dozen A&R men turning up at their first gig. It was downhill from there. Managed from the same office as Suede and Adorable they had some success with their first single – the 7 minute dub and guitar squall, ‘Love Is Dead’ in 1994. Prod by ex-Vibrator Pat Collier it got several unexpected Radio One plays. The 2nd single – the 2 minute nu-punk thrash, ‘Kitchen Party’ whose ‘B’ side ‘Flakey’ was a fave of the late great John Peel. Gigged regularly across London building up a good following of ex-pat Taffs, skinheads, nancy boys, and Liam Gallagher (who came to a number of gigs) with their Queen-esque stage performances. However, despite several promising NME reviews they split up shortly after shorning their foppish locks and trying to become just another tee-shirt wearing Brit-pop band. Mansel-Thomas now in London old age garage rockers, Fraff

Future Head – project started by Neil Pollock (2002), that is now a 3-pc outfit. Had track Hard To Be Easy feat on Sessions in Wales radio. More info req’d.

Fuzzbox Records – Cardiff based label who have released the likes of Mclusky, Curveside. More info req’d