Llyr Ifans – actor / musician born in Ruthin (1968) and brother of actor Rhys Ifans, with whom he played alongside in the film ‘Twin Town.’ Ll?r was a member of Welsh antagonist band Terry Waite a’r Asid. Married BBC DJ Lisa Gwilym and lives in Felinheli

Rhys Ifans – Hollywood actor, born in Haverfordwest (22.07.67) and grew up in Ruthin. Has appeared in films, Twin Town, Harry Potter, Spiderman, Notting Hill, Hannibal Rising. Was a member of band The Peth. 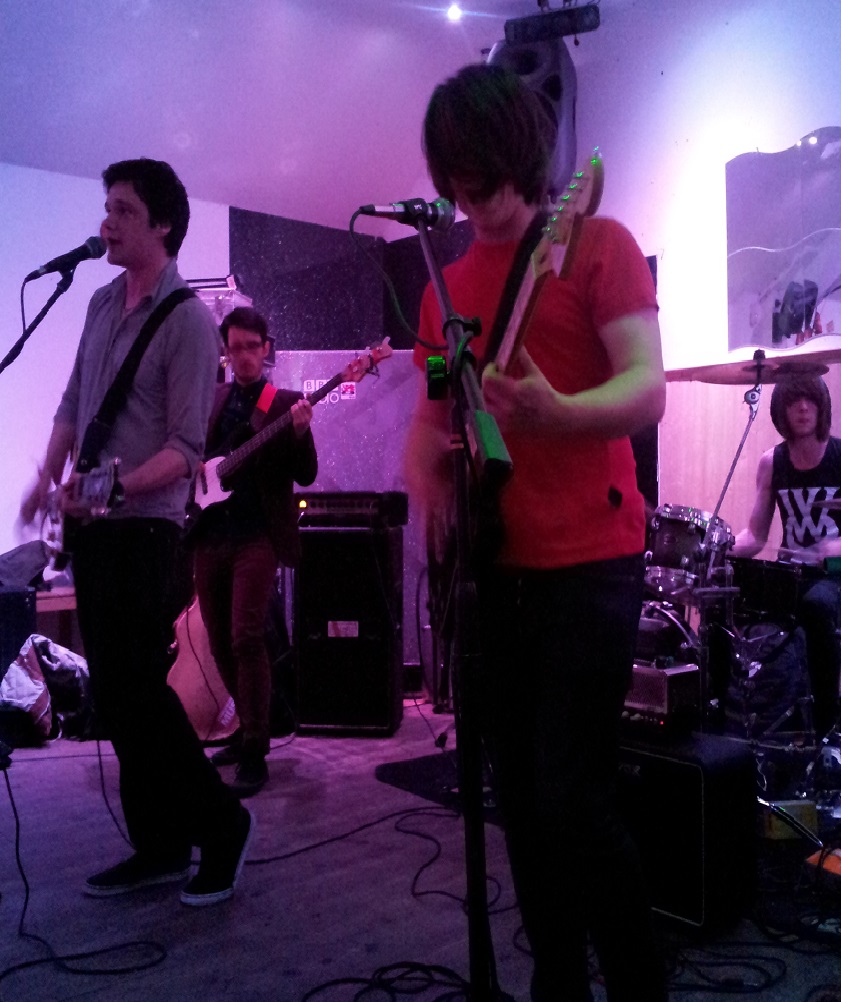 Igam Ogam Band – Delyth of the band says they were discovered by Rhys Mwyn whilst he listen to Radio Cymru he invited them down to record in Hawkwind studios to go on an EP. ‘We toured with Anhrefn, Cyrff, Fa Coffi i Pawb, Datblygu, Plant Bach Ofnys. My brother Gorwel was also in the band alongside Fiona his wife (Eirin Peryglus). We had an excellent mad time loads and loads of TV radio and mega gig’s even taking it to Manchester and Liverpool eventually with the band called Gwasgwr that’s when Peel took a look into Welsh bands.  It was a fantastic time to be in a welsh band to tour with Anhrefn etc was amazing what Rhys and Gorwel have achieved for Welsh music is beyond thanks they are the real stars and still are.  It’s a shame really that the rawness of music is disappearing we need Rhys to bring on some gigs again everything has disappeared or I’m really getting old.’ Band line-up (amongst others) Alan Slin, Gorwel Owen, Fiona Owen, Gavin Strongetharm, Anton Hughes, Spike, Delyth Owen. ‘We had musicians coming and going through the years but this was the true line up.’ 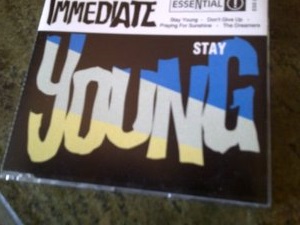 The Immediate  – Mold based 3-piece mod band, feat; Adam Walton (gtr,voc) (now presenter of Radio Wales prog, Musical Mystery Tour), Duncan Farmer (drms), Richard Harrison (bass) (ex Wanton Thought). Band were penultimate incarnation of Daisychain / Metroland. Played debut gig at Bridge Inn, Chester, Jan93. Gigged extensively throughout UK and relocated to South of France for spring / summer 1993. Banned from Conwy civic hall after Clarkie, their roadie, relocated items from Meringue’s dressing room onto the roof. Invited to play Mansun’s album launch party [for Attack of the Grey Lantern] at a large casino on the Isle of Man where they started a mini-riot in the backstage area. Sold 1500+ copies of their ‘Boy Who Tried to Change the World’ album [cassette only, naturally!]. Latterly managed by Alan Jones, one time manager of LA Guns and baritone saxophonist with 60s legends ‘Amen Corner’. Supported shit covers band called ‘Stereophonics’ at The Filling Station in Newport the night they were signed to V2. Rel one single (Stay Young) on Essential Recs that sold unfeasibly well in Sweden, but nowhere else. Failed to make it to their farewell gig in TJs in Newport after their transit van broke down in Hereford. Reformed in 2016, and released a comeback EP ‘Shadows & Ghosts’ followed by ‘Mold EP’ (2017) and an LP ‘Manbouy’ (16.06.17), quickly followed by ‘Better Live Than Never’ live EP (26.06.17). Adam (as The Immediate) has appeared in session 3 times on Neil Crud’s TudnoFM Show (15.09.16) (14.08.17) (14.10.19). In 2021 the band did plan to release a new album, but due to pressing plant delays they digitally put out ‘Men Like Us EP’ and ‘A Satellite Lies In The Ocean’ (single) (bandcamp)

Imperfect Youth – punk band from Ruabon, near Wrexham. Formed in 1981, consisting of Jaffa (voc), Martin Simms (gtr) (later of EI8HT), Chris (bass), Griff (drms). According to issue 3 of Rabid fanzine, the band played three gigs in their first six months of forming, and claimed to be influenced by the Dead Kennedys, Blitz, Crass and Vice Squad. The band later recorded two demos – both released in 1982. The tracklisting for the second demo is/was: Electric Eyes/I Only Wanna See/Imperfect World/You Mean Nothing/British Army/Bullshit/No Fun/Prison Rhythm/New Testament The Answer/Life Bizz/Youth Cult. Rabid editor, Neil Brooks, said: ‘As far as I know, Imperfect Youth called it a day after the two demos. Rich and I made the not-so-substantial trek to Ruabon to interview them once for our fanzine, and I think it was the first interview I’d ever done. Considering we were about 13 or 14 at the time, I do recall Griff and Jaffa being really good blokes, not condescending in any way. I remember seeing them play at the Miners Institute in Wrexham shortly after this and they brought the house down. A fine band. The above tracklisting I nicked from the Kill From The Heart website, so if anyone has any recordings of this long-forgotten band, please get in touch. Be nice to hear them again.’

Indiana – Rhos-on-Sea rock band, feat; Jamie Stevens (gtr) (ex Babies With Rabies, Real7), Tim Jones (drms), Martin Brady (voc), Steve Donovan (bass), Duncan Macgregor (gtr). Roots of band formed by Martin and Duncan in 1996, adding the various members over the coming years up until Jan02 when they made their live debut at Penrhyn Old Hall. Rec a single at Rockliffe What You Need May02.

Infestation – sci-fi zombie film set in 2080 made in N.Wales (2004) by ESP Productions. Starring Ross Evison, Susan Riley, Malcom Raeburn and Paul Sutherland. Plot  has humanity driven underground by an unstaoppable virus that has destroyed all life on the surface of Earth. Film locations inc beneath Rhyl Sun Centre and the Mersey Tunnel. By all accounts a very low budget B-movie – rel on DVD in Australia and Italy. 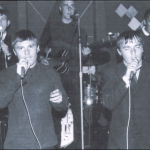 In Full View – 1999 series on BBC Choice covering the ‘other side’ of Wales. Ran a short retrospective piece on the ‘career’ of Neil Crud in Nov99. Produced by Tom Law who went on to produce Sleeping Dogs series for the same channel.

Inkerman – Rhyl band formed by 3 ex-members of Smokestack, Cliff Marshall [voc,gtr], Delwyn Williams [gtr], Andy Hamer [drms] and Martin “Hair” [bass] in 1975. One practice then they were gigging – everything just slotted together from the start. Played all over N.Wales and later practised at Pengwern Hall (Rhuddlan). As a ‘thank you’  they played an open air fund-raising gig there during the early summer of `76 – look out for bootlegs of “Inkerman Live at the Penguin”. Sadly, Cliff later had to give up playing because of medical problems and Delwyn later backed country ‘n’ western artiste, Lee Anderson [Andy played for her once]. Delwyn and Andy later Skin Deep.

Innocent Bystanders – Port Dinorwic thrash Punk band, 1996, feat; Martin Peet (bass), Dean (voc), Steve (gtr), Pete (gtr), Glen (drms). Martin remembers, ‘We set the band up in 1995 when I was in my 3rd year at Bangor Uni. We used to rehearse at the Crypt (I was working behind the bar at the time so had the keys for the weekend)  The songs were created while Steve and myself just jamming and mucking about, then from that building a 2 hour set. I miss those days. The Crypt used to put bands on every week, but we packed the house on our first gig (only 100 capacity, though). We charged 99p and a chocolate bar at the door. Our support band were Dog On A Rope. Well we did a few sets in the Crypt, then I started working in Bristol. A gig was booked for the Jocks Bar in the Student Union.  I booked a week off work to do the gig. I rang Pete and they had replaced me with a mate of mine! However, they didn’t tell him when the gig was, therefore he didn’t turn up. The band split after this. Shame really, I quite enjoyed it.’

The Instant – new name for Rhyl’s Cellophane Boys who played only one gig under this name (their last) at The Queens in Rhyl in May 1978, with John Soxx on gtr.

Interceptors – Holywell punk band formed early 80s after The Grids had split, feat; Andrew ‘Tunkie’ Tunnicliffe (gtr) (see also Vicious Circle), Neil (bass), Ian ‘Sten’ Stenhouse (gtr), Timmy ‘Bean’ Davies (drms). Played a series of Gigs around N.Wales playing what would today be known as Britpop. Also billed on the CND benefit festival at the Queens in Rhyl 21.2.1981. Tunkie left to join Mercenary Skank, and Sten moved with them to London to be their roadie and ended up being the one who got a deal after joining a band Lightning Strike. More info req’d.

Interpreted Heroes – Anglesey band (2002), feat; Tim Williams (voc,bass), Pedro Meade (gtr) (orig from Brazil), Sevan Niggogoshain (drms) (orig from Armenia), Tom Hume (gtr). Started out as the Asscandles for a laugh and got offered a slot at Llanfest, having a good reception.

Into The Valley – punk tribute radio show (1998) on Shore FM, hosted by Dave Macher in the guise of Float Jones.

Invasion of the Astro Monsters – Colwyn Bay indie band formed 1989 by Robin Hemuss after being ousted from 4Q, also feat, Adam Astro Hemuss (voc), Dave Slave (bass). Julian Gardner (brother of Simon Gardner) rehearsed with them once but didn’t want to join the band ’cause he thought the name was silly. Formed 1990, in the image of the Stone Roses and Charlatans, also heavily influenced by The Cure. Never actually split up, but haven’t done anything collectively since about 1992. They basically got bored waiting for a decent drummer – who could live with the name – to turn up. No gigs, but a few rehearsals and a shed load of demo songs. Dave Slave played bass on the version of Godz’v’Megz with acoustic drums. The rest of the demos without real bass on were recorded after he’d lost interest. Also known as the Astro Monsters. 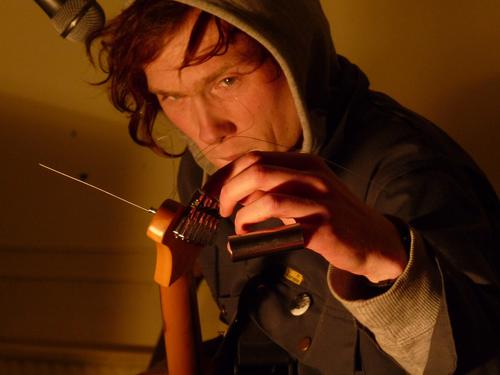 It Might Be – Abergele based band in the Jesus and Mary Chain mould, fronted by Alun Evansh (who re-emerged 14 years later as Alun Tan Lan (see also Brwas, Y Niwl). Bootleg tape does exist of their gig at The Bistro in Rhyl Apr91 where Evansh introduces the band as It Might Be, but they could be Boff Frank Boff