Eclipse Records – Record shop in Shotton (c.late 70s- early 80s). Run by Arthur. Had a kick-off with the Anti-Nazi League and windows were smashed. 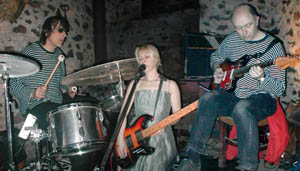 Edj – producer and remixer from Holywell (better known as Martin Devaughan of Green Dragon). One of the originals on the Manchester punk scene in 1977, Martin left the “glam and bright lights” and moved to North Wales (when everybody else was moving to Manchester), hoping for a quiet life. Unfortunately he was recognised by a night club manager in Rhyl as one of Manchester’s top club DJs and was asked to do a guest spot the following week. Nearly 15 years later, too many late nights and disillusioned with the way the club scene was going Edj went back to his roots musically and started making his own music. Now with 7 albums of his own (and 2 of his mates’), countless production credits and demand growing for remix work Edj can finally sit back for that quiet life, picking and choosing which projects he works on. Ironically, and much to Edj’s amusement some of his work has for the past couple of years graced the dance floors of Ibiza, the very music scene he was trying to get away from!!! Edj’s style, is like Edj himself, quirky, original but with that underlying hint of danger. Once described as “FatBoy Taff” Edj never wanted to be in the spotlight, but was never far from it’s shadow.

John Selwyn “Redeye” Edwards – orig roadie (along with Gareth “Gaz Top” Jones) for Seventeen and The Alarm. Can often be seen in Alarm videos (68 Guns where if you look closely towards the end the camera pans out to reveal Gareth and Red waving their hands in the air). Began to work with other bands during the late 80’s (All About Eve for one) and eventually settled in San Francisco. Has been Bob Dylan’s stage manager/drum tech for much of the 90’s

Efa Supertramp – social-anarchist punk-folk singer from Pwllheli (real name Efa Thomas). Former member of Stilletoes. Relocated to Cardiff after travelling the world and released debut solo LP ‘Rhyddid Yw Y Freuddwyd’ and embarked on a hitch-hiking tour of Europe to promote it (summer 2015). Follow up album ‘Apocalipstick Blues’ (rel Oct20). Has since lived in London, Bristol and on the South Coast. and in May17 played live in Tenerife. Also sings/shouts in Brighton based Killdren. Had session broadcast on Neil Crud’s TudnoFM show in Feb19.

Eggary – band feat; Dave Egg (gtr,keys) and Gary Masone (drms). A lot of people from the Llandudno / Conwy / Colwyn Bay area still seem to have fond memories. They rec 4 cassette LPs “Golden Vodka”, “New Water”, “A Future For My Leg” and a live album “Bloody Hell”. Dave Egg followed these with 6 solo LPs. Its all now on CD and if anyone wants copies He gives them away. Favourite numbers were “Rancid Banana”, “Metal My Head” and ” Fuck Off You Twat, You Fuckin’ Cunt” – a love song.

Egni – fanzine by Anglesey based Johnny R of R-bennig recs. 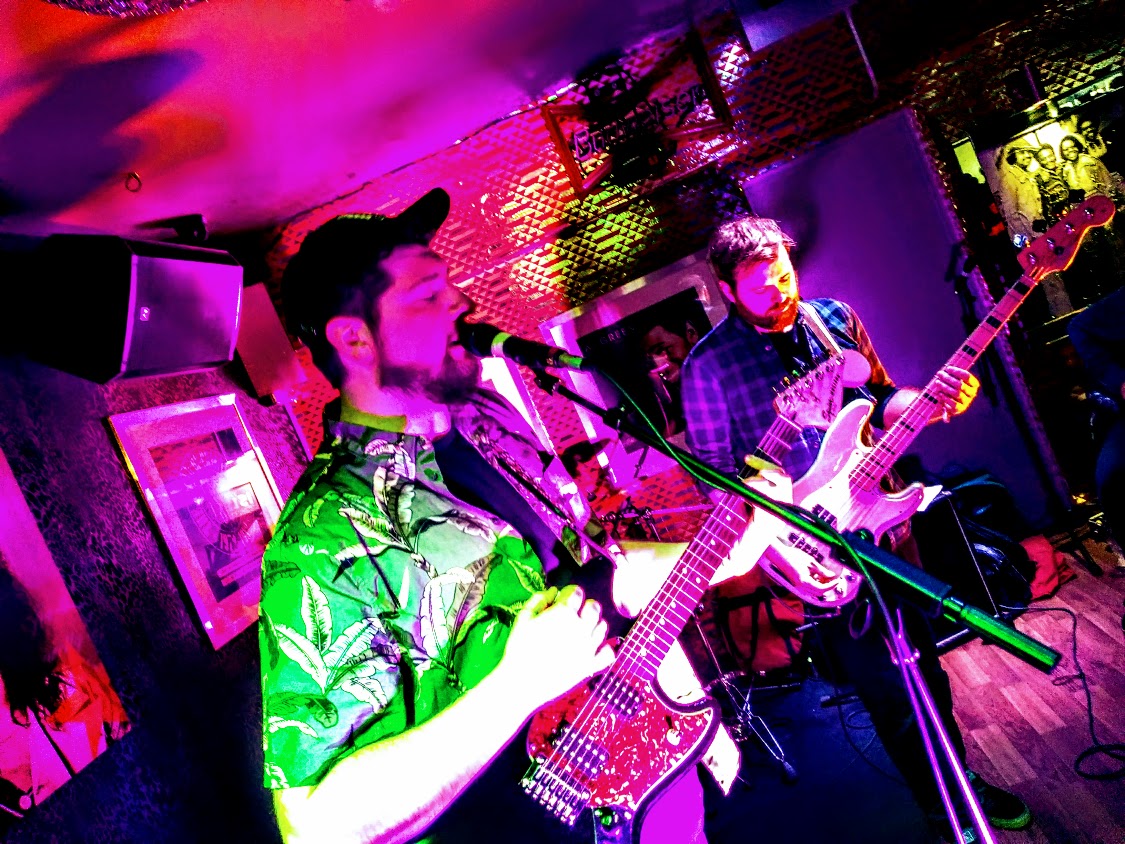 Electric Company – Final name of The Immediate (1997). Played one gig at the Savoy Bistro in Rhyl (with Blush?) and then reverted back to The Immediate for their ill-fated last gig.

Electrip Records – record shop in Rhyl in late 70s. ‘Magic’ Pete ‘Kavern’ Conroy (pic) used to work there. It was huge for its time and stuffed with obscure albums as well as the chart stuff, with patchouli oil in the air. It was where Rosie o’Gradys is – and there used to be an Electrip poster in the back window up until a few years ago. They had their own carrier bags – very posh.

Element – orig Wrexham based line up of Nameless, played two gigs under this name before changing it to the present name and relocating to South Wales. feat. Al Nameless and The French 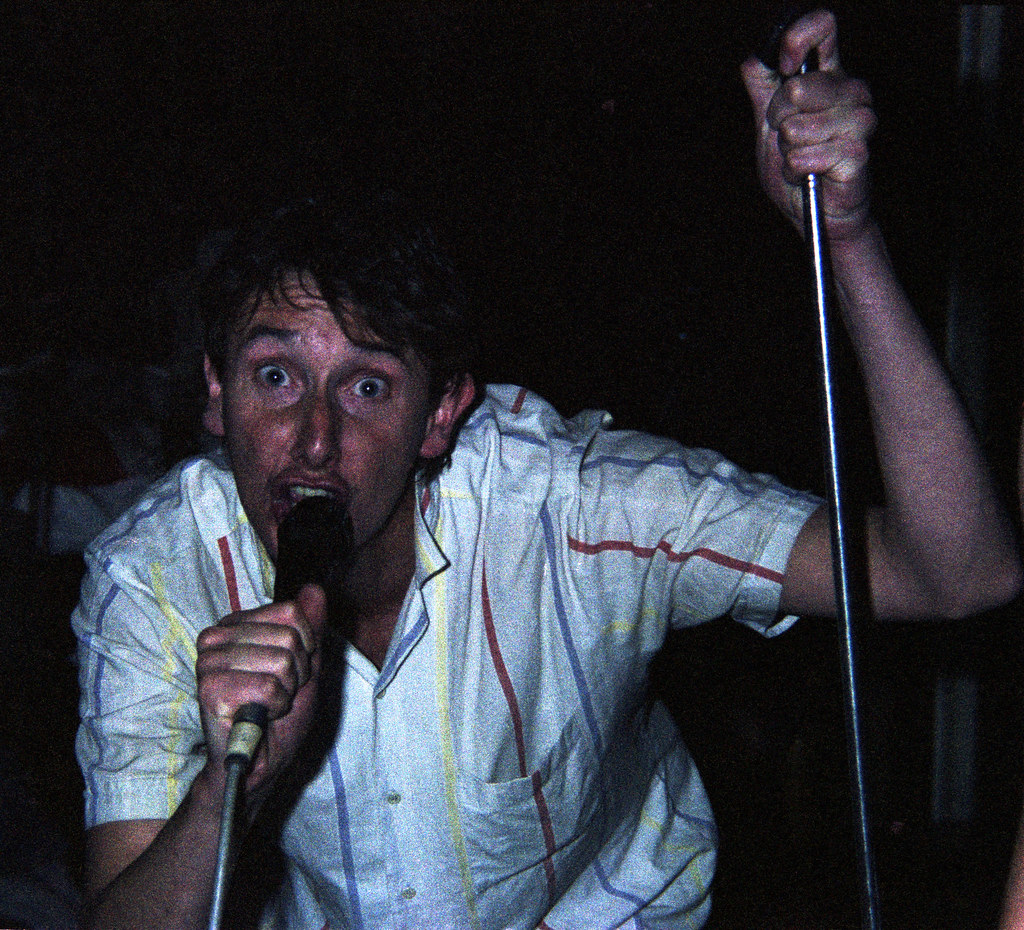 Elfyn Presli ac y Massey Fergusons – Welsh farmer psychopunk band feat on the Words of Warning EP The First Cuts Are The Deepest along with Anhrefn. Any band with a song Seig Heil Jackboots Maggie Thatcher would seem to have a bright future, unfortunately, this band became heroin addicts, heavy drinkers and/or potheads, but this turned out to be a rumour started by Anhrefn‘s Sion Sebon!. Reknowned for being an excellent live band, reviews in The Observer were pretty good to them. John Peel was a fan and would like to have played “Jackboots Magi Thatcher” but it was banned by the beeb, but was played by Neil Crud on BBC Radio Wales (2004). Elfyn Presli stopped when the driving force (Bern) behind the band just had enough, and called it a day after a monumental session in Aberystwyth (c1987). Of the band members (we think) Gethin Jones lived in Russia, Chris Shutes comes back up to North Wales occasionally, and Bern (Bernard Davey) stayed in the area, supping a beer or seven and pontificated on the meaning of beer, music, and the state of the economy. He sadly died 25.04.10. (read obit) Dic Ben and Gethin teamed up again in 2015 to play Elfyn Presli songs as part of Welsh Rebel Outpost.

Carwyn Ellis – Anglesey native (b.09.08.73) who is in Cardiff based Colorama and also operates as Zarelli. Has also worked as producer, arranger, sessionist for several artists such as Edwyn Collins, Shane Macgowan, Oasis, Unkle, The Pretenders.

Embassy – nightclub (and occasional venue) in Bangor, opened in 2011. Based in a Grade Two listed building that was used as the city’s main post office until early 2008. Closed 31.12.13

Emily – Ruthin indie band (late 80s) who had a short-lived career on Creation Recs. Feat; Mark Williams (bass) (ex Rejected), Geoff Davies (drms), Ollie Jackson (voc,gtr), Splink (gtr). They appeared on the Creation comp LP Doing It For The Kids and rel 12″ Irony, rec LP for the label but wasn’t rel.
It emerged in Mar05 that the band were still active (mainly in Italy) where Gian says, ‘After Creation we recorded Stumble (EP) and the albums Rub al Khali, Beyond the Barn, The Attic Sessions. Emily are Oliver Jackson (voc,gtr), Nick Jaques (drms), Gian Binelli (sax) and any old bass player we can find.’ All recordings are available in CD format. Rel a retrospective LP ‘A Retrospective’ (on Firestation Recs 05.02.16) 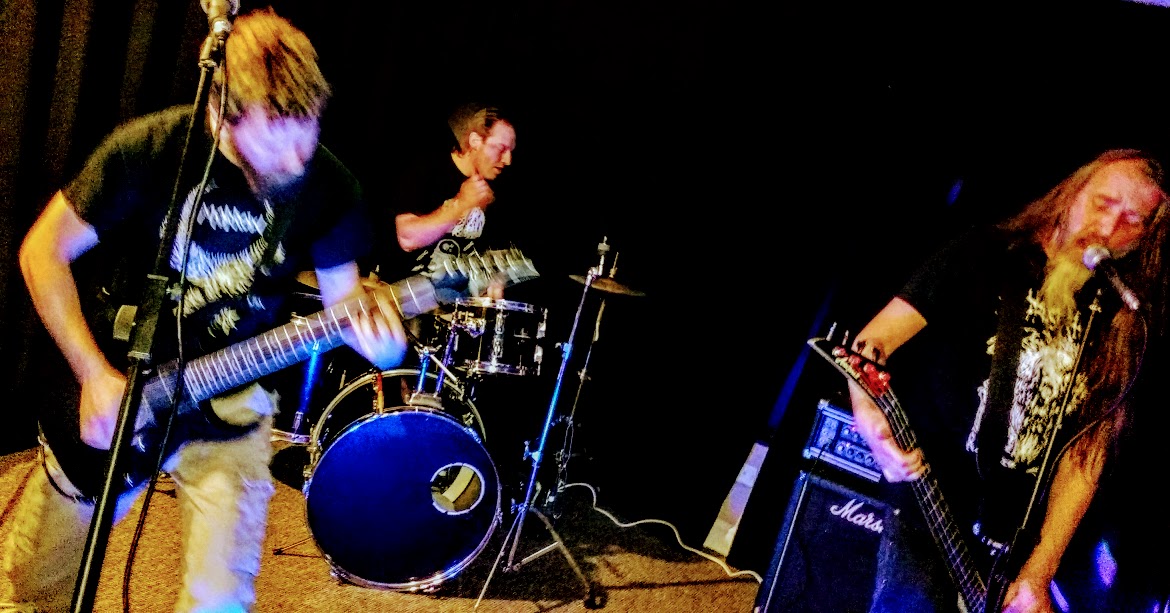 Emissaries of Syn – Conwy noise/grind band (formed 2012), feat; Mark Watson-Jones (bass,voc) (ex Blacklisted, Skinflick), Gwyn Jones (drms), Matt Black (gtr). Rel ‘Off Message EP’ as download and ltd CD 01.05.15, then ‘Split Seven Inch EP’ with Spam Javelin (on link2wales Recs 29.04.16). By mid-2016, Aled Lewis (gtr) (ex Bonzai Massacre) who had been filling in for Matt became a permanent member with Matt relinquishing the duty. Rel ‘Accept, Adjust, Advance EP’ (23.03.17) and an eponymous compilation album of their releases (also Mar17), ahead of playing in Moscow and St Petersberg (Apr17), then played Czech Rep and Germany (Aug17). In Oct17 it was announced that Aled was leaving the band to concentrate on Morvo. Luke joined early 2018 and was replaced by Raz Casket in 2019. Rel a split 12″ EP with Psycho and MxOxMxMxA (on link2wales recs – among others)  (bandcamp) 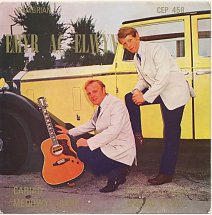 Emyr ac Elwyns – small independant record shop on Rhiw road in Colwyn Bay (1978 – 88). Craig Davies says, ‘I don’t know when the shop opened but I started buying records there in 1978.’ Emyr (Gary) ac Elwyn Williams where a successful Welsh folk duo(c1969), released a now very rare 7″ EP Cariad (Cambrian Recs – famous for rel 2 early Mary Hopkins singles). Emyr (pic left) became an actor/comedian. Iwan Parry says, ‘I used to love that shop as they had a box of punk sinlges on the counter & survived as an ongoing business with a stock of about 50 records & a load of Max Boyce cassettes, ogi ogi ogi blah blah blah…’

Enigmatics – soon to be biggest new band in North Wales 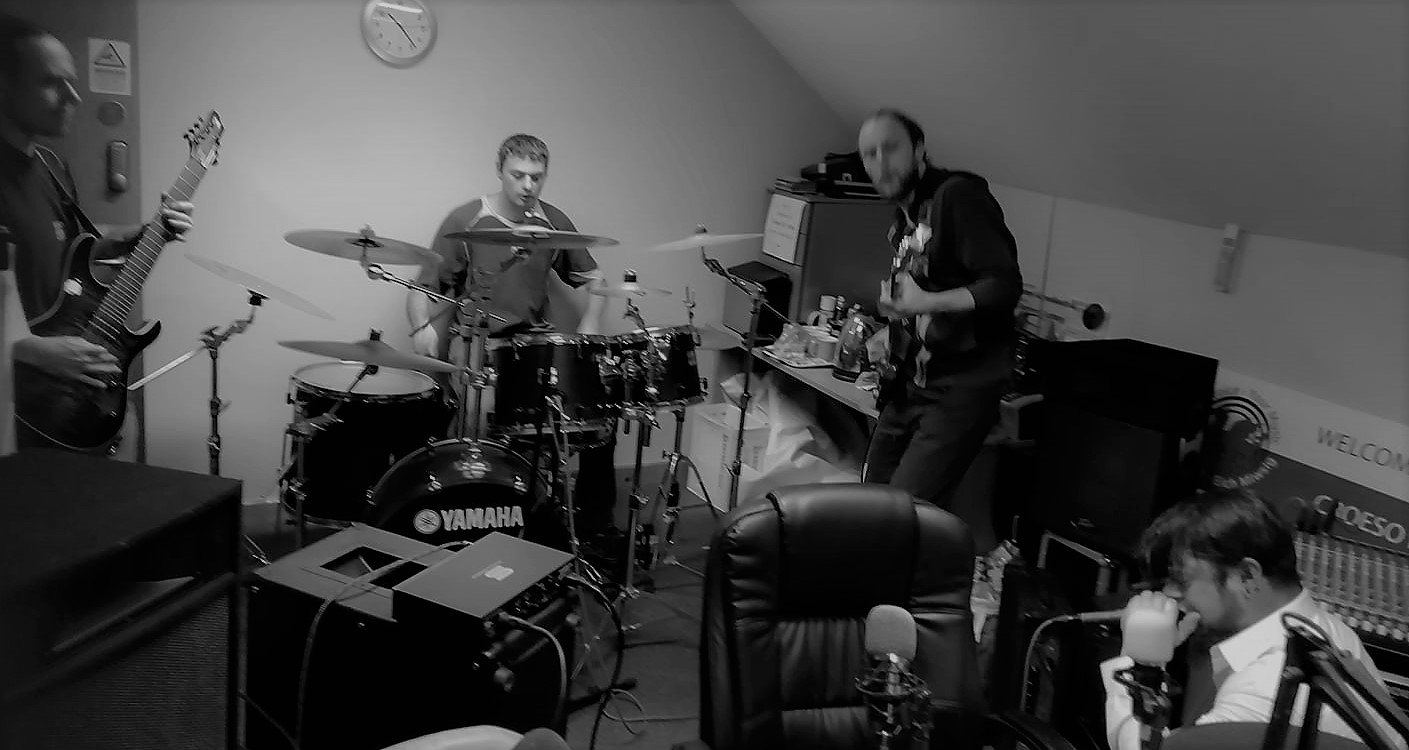 Eternal Flame – Rhyl band of late 70s, feat; John Hughes (voc), Johnny Wray (gtr), Mike Vitti (drms), Phil Hill (bass). Played mainly private parties and a lot at Rhyl High in the drama studio as they all attended that school (except Vitti who went to Blessed Teds and used to gallop around on a horse!). Played rock covers AC DC, Black Sabbath etc and were musically very good, better than any band in Rhyl at the time.

Gareth Evans – manager of Stone Roses (b.1950). He was an ex-hairdresser who knew almost nothing about the music business, and signed them to Silvertone; one of the most iniquitous recording contracts in history (his legal adviser was a mortgage specialist from Manchester).  He was a successful businessman in the 70s and also ran the International venues in Manchester during the 1980s. He moved to Trearddur Bay in 2002 and was in the news in 2006 when he was hospitalised after being attacked on his doorstep. 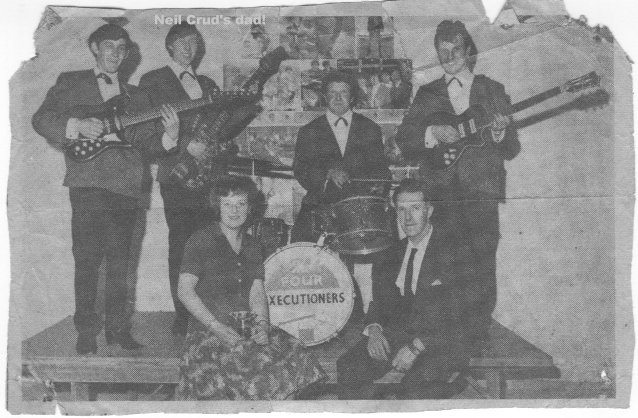 The Executioners – beat band (orig called The Kelts) based in Rhewl near Ruthin in the mid-1960’s. feat: Dave Evans (gtr); Ray Williams (gtr), Dennis Davies (drms), Chris Birchall (voc,bass) who is Neil Crud and Isaac Birchall’s father. Performed at local Saturday night dances, Social Clubs throughout the region.  Made an EP but the company went bust before the demo pressings were produced! Offered a tour of Hamburg but turned it down due to college / apprenticeships / marriage etc.  Chris says, ‘We had graduated from the local village hall dances, through the Chester and Deeside working-mens clubs, to earn our place on the Mersey Beat scene. We played the Cavern, The Iron Door, Tower Ballroom New Brighton and many other Merseyside Clubs, alongside the likes of the Searchers, The Big Three, Freddie Starr and the Midnighters, The Black Abbots, and the Undertakers. Sadly, we were never on the same bill as The Beatles, so I never got to meet John Lennon.’ Band eventually split about 1966/7 for the same reasons. (more pics)

The Exit – Rhyl based band pushed for the big time in the never-never land between indie and mainstream pop, supported big names like Primal Scream and All About Eve, but ran out of inspiration. Featured singer, pianist and songwriter Kandina Jane (later Deans Daughter, Sonar, V8s) and one time Sons Of Selina bassist Ken Mainardis, Paul Douglas (gtr), Mark Ormesher (drms). Rel 12″ EP The Room (1990) on their own GWA label.

The Extremes – punk band of early 80’s from Mold. Formed by Dave Pollard (now lives in Australia). They wrote their own songs and covering Buzzcocks, Sham 69, Clash and SLF.