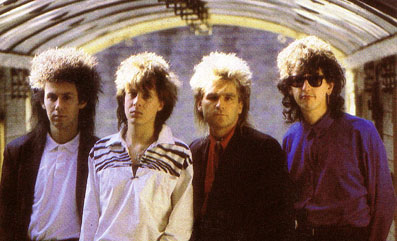 Rhyl based chart band of the 1980’s, Mike Peters (voc/gtr), Eddie MacDonald (bass), Dave Sharp (gtr), Nigel Twist (drms).
Orig called Alarm Alarm having decided to reinvent themselves after ending Seventeen.
Played their debut gig at The Victoria Hotel, Prestatyn 10.06.81 & in Nov Rel 2000 copies of 7″ Unsafe Building / Up For Murder on their own White Cross label.
In December the band become managed by then U2 agent Ian Wilson, finish the year playing with U2 at the Lyceum Ballroom on 21.12.81.
Spent 1982 supporting the Jam, U2 & the Beat on various tours, gain music press support & industry interest.
In August The Alarm sign to IRS records. Oct sees the release of their first IRS single, Marching On, which gains good reviews.
Enjoyed massive success in USA after initially touring there with U2 in 1983 & later with Bob Dylan. While on tour in America in 1983 The Alarm are stopped by an American Traffic Cop who informs them that they are needed in the UK to appear on Top Of The Pops where 68 Guns has made its chart debut, reaching #17.
16 singles in the UK Top 60. Rel 7 LPs between 1984 & 1991, incl; Declaration (IRS) debut LP full of catchy rock songs, establishing a simplistic formula they rarely veered from. Strength (IRS) 2nd LP & another big hit. Standards (IRS) compilation LP from 1990. Raw (IRS) last LP, Rel in 1991, with a Welsh-language version Rel on Crai Recs.
Played their final gig June 1991 at the Brixton Academy where Mike announced from the stage that he was leaving the band. Dave, Eddie & Twist tried for a little while to continue & find a replacement for Mike, but what they had was very much the combination of the 4 members, so it never happened; the 10 years of The Alarm were over.
A reunion tour was planned for Oct95 but was stopped by Dave’s father. Mike later said that the moment had now gone, & it would never happen again. Twist has also hinted that there was a planned reunion in 1992, but no other info is known as yet.

By 2000 Mike Peters built on the success of his solo work & Dead Men Walking and went under the moniker of The Alarm to tour the States, UK & Europe which good results, & continues to do so.
The original line up of The Alarm reformed late 2003 after what must’ve been a handsome payout for a one-off gig, televised at the Scala in London on 23.10.03. Under the pseudonym Poppy Fields, Mike Peters with his Alarm 2001 backing band crashed into the UK Charts once again with the single 45RPM (on Snapper Jan04) having duped the music industry into believing the Poppy Fields were a hot new band. Followed up with an LP (as The Alarm) ‘In The Poppy Fields’ (May04). (review)