Terminal – zine by Heswall students Iwan and his sister (the best zine seller ever) covered the Planet X scene in tandem with Mada. They tried to work without competition.

Think of The Winter – synth band (early 80s), from Widnes, feat; ex-members of Dead Trout. Rec demo at SOS in 1982, one of which feat on a comp LP. Also app on the Phil Ross Show (c1981). Have also played under the name of The Other Voice

35 Summers – band feat; Dave ‘Pichilingi’ Fenlon (voc) (ex Wake Up Afrika), Duncan Lomax (gtr) (ex Wake Up Afrika, Perfect, Hal). Project put together from ashes of Wake Up Afrika, early line up inc Dave Upton (gtr) (ex Nice Party) who was replaced by Ian Greenwood (later Fishmonkeyman), Robbie Fay (bass), Andy Hignett (drms) (ex Wake Up Afrika), Jamie Southern (keys). Creators of the ‘Shankly’ T shirt as worn by Peter Hooton (The Farm) on Groovy Train video, and John Peel. Rec two Peel sessions and one for Mark Radcliffe. Rec ‘Come Together’ in Pink Museum studios and rel as 12″ on Planet Recs (1990) then signed to RCA in 1991 and rel ‘I Didn’t Try’ and ‘Really Down’. Headlined own tours when with RCA but also supp EMF and Northside on national tours. Album ‘Sketch’ was shelved when band split in 1992 but was recently rel by Excellent Recs in Japan.

36c – 3-pc punk band, feat; Dan (gtr,voc), Joe (bass), Greg (drms), and Boyd the mascot who stands on stage through gigs holding Percy the rubber chicken. Gigged in L’pool, Southport, Ormskirk and France. Rel 6 track EP ‘We Don’t Really Mind Dave Kent’, also have the trk ‘Close The Door’ feat ‘Unearthed L’pool Cult Classics Vol 3’ (Viper Recs) Boyd was fired as mascot. an unnamed female joined on rhythm guitar in mid 2004. Since May05 the band have been quiet and are rumored to have split. (website)

This Is A Load of Shit So Don’t Buy It – punk fanzine c1989 edited by Nik Stater. In A4 format. More info req’d

Those Naughty Lumps – formed summer 1977, feat; Kevin Wilkinson (drms) (later China Crisis), Martin ‘Armadillo’ Cooper, Tony Mitchell, PM Hart and Pete ‘Kid’ Younger (bass) (later of Wah! Heat). Had a residency at L’pool’s Havana Club and rel 7″ Iggy Pop’s Jacket (1979) on Zoo Recs which feat the sax player from Fun. In 1980 they rel EP Down At The Zoo on Open Eye Recs but several line up changes with only Wilkinson and Hart being the mainstays meant they eventually fizzled out. At some point feat Bobby Carr (keys) (later Moderates, Tontrix, Surreal Estate)

Thrashgig – L’pool gig promoters, and now a record label. Are planning to release an EP every mth, ltd to 1000 copies only, so when its gone…Full details available (website)

Timelords – 1988 project by Bill Drummond (ex Big in Japan, Lori and The Chameleons) and Jimmy Cauty. Failed at 1st attempt to make a dance single out of the Dr Who theme, but added the Glitter Band beat and it became a big hit. They soon wrote a book ‘How To Have A Number One The Easy Way’, which came with a money back guarantee. Then they filmed an as yet unreleased road movie in Sierra Nevada (see also JAMMS, KLF, K Foundation, 2K)

Timeshard – Now defunct L’pool based ‘space band’ who were active up until 1995/96. They produce a sort of ‘Goa’ trance techno sound and rel a couple of CD single’s for a number of labels. The group was made up of three members Goober, Sim and Dream Angstrom who got together in late 1988. The put out a couple of cassettes before attractiing the attention of the Planet Dog label The cassette only rel ‘Crystal Oscillations’ app’d in 1994, followed by the 1st CD single ‘Zero’ on Planet Dog (BARK 008CD) 1995. A CD album ‘Hubub Ku’ was rel in 1996, and as a round up the comp ‘Now What Kind Of Music Do You Call That?’ was rel on the Nebula Entertainment label (NEO 001) in 1998. Nebula was the group’s own label formed after a split with Planet Dog and coincided with the break up of the group. Timeshard also crop up on numerous Trance comps, a John Peel session and countless free CD’s given away with music mags.The group also produced their own zine ‘The Shardian’ which feat all the usual news, tour dates, T-Shirt offers. Based at PO Box 26, L’pool, L17 3DZ. Since the split the group have continued to maintain the website which offers MP3’s. In addition Goober has performed as Monsters Of The Id, and is tentatively considering rel some material

Tone Deaf and The Idiots – had trk ‘Screen Love’ appeared on the Open Eye Records Comp ‘Street To Street’. They also had the distinction of releasing a one sided flexi disc ‘Why Does Politics Turn Men Into Toads?/Repatriate The National Front’ on the Lyntone Label BLI-1 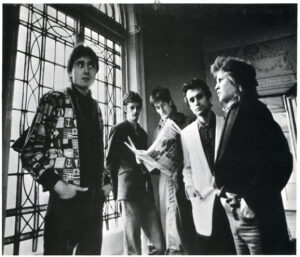 Top – Formed following the demise of The Wild Swans, and possibly the least well known of the offshoots. Joseph Fearon (bass) teamed up with orig Wild Swan Alan Willis (drms) late 1989. They were playing a sort of poppy, even ‘baggy’ (god forbid!) sound. They put out a couple of singles and one album ‘Emotional Lotion’ in 1991 before calling it a day

Topsy Turvey – (band 1982-83), feat; Amanda Todd (aka Mandarin Orange) (voc) (ex Zale Out, later Heaven Tonight), John Feeney (bass) (ex Desire Me, Zale Out), Keith Miller (gtr), T-Terry Jones (drms). Amanda was girlfriend of Philip Franz Jones (Afraid of Mice) at the time and sang for them at a few gigs. Terry was named T-Terry cruelly cos he had a stutter. Played their debut with Personal Column at the Warehouse (1981).

Townshend – former name for The Vagabonds

Toxic Blue – early name used in 1981 for Scream in Silence

Toxic Moth – Wirral progessive rock band (1980-81) Orig line up : Gareth Edwards (bass,keys), Keith Thompson (voc), Tony Richardson (gtr), Huw Williams (keys) and Dave Barrington (drms). The band mainly produced demos at Amazon studios engineered by Gil Norton and trod the Wirral and L’pool gig circuit in the early 80s with all their own songs, and are reforming this year with all members for a Prog Rock Festival at the Hotel California on 30.4.06. Gareth left in 1981 to join heavy metal band Treasonand later concentrated on eclectic electronic dance music with Dance the Girl, Some People (with Huw Williams and David Chappell) and Bizarre Love Trianglewhich he still produces with various collaborators including currently Keith Thompson. Neil Stenhouse replaced Gareth on bass to 1981-83. Huw Williams is now a freelance touring composer. Keith Thompson later formed touring covers band Toxic Blues. Gareth and Keith collaborated with Alan Gill in 1983 (ex Teardrop Explodes and Dalek I Love You) on Exile in Limbo which was feat on John Peel

Trans Am – band (c1980) feat; Eddie Robinson (bass), Reggie Seddon (gtr), and Dave Hartley (drms) all from around Anfield, Reggie’s brother, Harry (voc) was a mad Elvis fan and the band used to play loads of Elvis stuff with some Beatles and other easy to play stuff chucked in. Michael Ryan took Hartley’s place. He came up with the new name Deja Vu

Traveller – folk-rock band formed in 1992 as Hurricane, changing name 18mths later, feat;.Ste Cox (bass) (ex Reaction, Call It Belief, later Lovebomb, Trinity), Jason Parr (voc,gtr), John Marsden (keys) (ex Reaction, Call It Belief), Richie Long (drms). Perfected a stronger set and signed to Bod Promotions, they were able to sell-out larger venues like The Picket. Famous for their huge poster that adorned the bridge that crossed into St. John’s Market, above The Royal Court. When the bridge came down, the poster was still on it!! Also hosted a free gig at The Picket and paid for it themselves! Of course, it was heaving – guaranteed! Supported Dodgyat that venue at the height of their fame. ‘The band recorded an impressive demo in April ‘ 93; harnessing the power of the hammond to add drive’Groove magazine 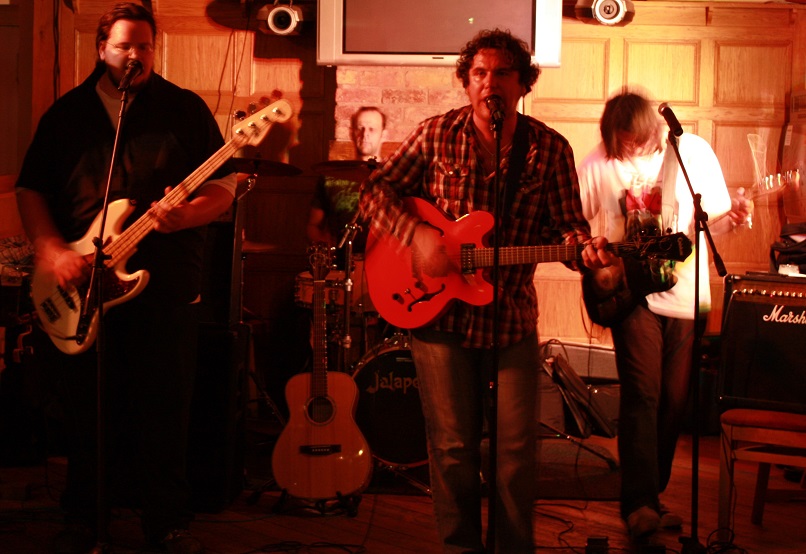 The Tutors – band (1982-84) feat; Colin C Frost (voc,gtr) (ex Eat At Joe’s, Fox Glove, later Supercharge, Circus Circus, Laughing Freeman), Les Rodgers (bass) (ex Eat At Joe’s, Fox Glove), David Rodgers (keys), Kevin Kelly, Gwyn Jones. Although Les says, ‘The Tutors were never a band…don’t know where you got that from… the people you mention as being members of this supposed band where in fact musos put together by Knowsley County Council to teach kids how to play and form bands. We just taught the local kids to how to play their instruments. I taught bass, Colin Frost taught Guitar, Kev Kelly taught guitar and the other guys did duties on drums and keys respectively. Our remit was simply to teach them basic skills and form them into groups for a final graduation concert. We did it over about two months. Thought you might want to know that. Some of the kids we taught went on to join bands and a get deals.’

TV21 – club in Southport above the Marine Bar pub. 2 regulars from Planet X put Decadence Within and Smart Pils and later UK Subs on here.

25th of May – Highly politically charged guitar/dance band (formed 1988), led by frontman Steve Swindels (who called himself Swindelli to sound sophisticated), Snaykee (gtr). Rel, “Lenin and McCarthy” album in 1992, included “Crackdown” single, followed by “Apathy in the UK” EP in 1993. Named after Argentinean aircraft carrier circa Falklands or whatever event that was named after. Set to play celebration gig for Labour’s 1992 election victory, didn’t happen. Steve and Snaykee remained to evolve into Manbreak

24/7 – The previous Flare’s, the 70’s themed hen night special has undergone a transformation and is now beginning to put on gigs as well as being the home for the Defcon club. Situated at the junction of Fleet Street and Hanover Street.

Twin Method – Wirral based nu-metal band, formed in late 1998, feat; Keith Hill (ex Morbid Symphony, also of Flesh Resonance) his brother Briz (ex Morbid Symphony), and Dean, (ex Oscuro). Initially recorded a 3 track EP at Whitby Studio’s L’Pool Rec debut LP in USA Logan Madher (ex Soulfly etc). The album was recorded at Paramount Studio’s and was produced by Ron Goudie (TSOL and GWAR) and is provisionally title ‘Adjust’ and is due for release in the autumn of 2003 when it will be supported by a full tour (website) More info req’d.