Pagan Dance Label – was linked to the Kenaz label in London though PDL had an address in L’pool at Holmes Building, Wood Street, Liverpool, L1

Pearl Distribution – distributor based at London Road, Liverpool, L3 contacts listed as PatrickO’Kill and Keith Leary. Was running in the mid 80’s and distributed industrial/difficult releases such as Sixth Comm/Vanishing Heat, and Mother Destruction which Patrick O’Kill was a member of, was the distributor for The Empty Quater label. Possibly Mother Destruction evolved into Sixth Comm who released material onPagan Dance Label

Pegasus – band of late 70s, feat; John Bleasedale (voc,gtr) (later of Body), Duncan Lewis (bass) (later of Reverb Brothers), Ade (keys), Si Bateman (drms). Si was one of many drummers. Band had wild aspirations & once hitch hiked to Paris armed with tins of peaches before being offered a place to stay in Brixton. After Ade left Andy McCluskey (later of OMD, The Id, Hitlerz Underpants) joined.

Perchange Recs – B’Head label run by Pete Roberts who used his redundancy money to rel a single for Chinese Religion in 1982.

Perfect Virus– Liverpool band (formed late99); feat; Neil Sahgar (voc,gtr), David Coleman (gtr,voc), Paul Reay (bass). Play what is described as a cross between electronic beats, basslines and distorted vocals, sound like a more metal version of NIN. The track ‘This Day’ was used on an MTV ad back in 2000, this plus other tracks are available to download at (website)

Persuaders – band (Feb82-1989), feat; John Jenkins (keys) (ex Come in Tokio), John Gillin (ex Come in Tokio), Dave Price (bass), Gary Cooke (drms) (ex Change To The East, Hi-Tech, later Foundation), Siobhan Maher (ex Peep Show) left in 1987 and formed River City People – at one point playing in both bands (Siobhan always thought herself as a session singer rather than part of the band). Signed a management deal with KRT (Sting’s management co) and then broke up in Sep89. They had a Peel and Janice Long session in 1985 but there best line up was in 1986 with John Kennedy (voc) and Paul Speed. At one point was an 11 piece band. Some members went onto form Badger & The Buck Boys, and other members inc, Tony Upham (voc), Brian Farrell (drms) (ex Our Kid), Howard Northover (drms) (later Only Child, Absaloot, Big Unit Agricultural Regime). (biog) 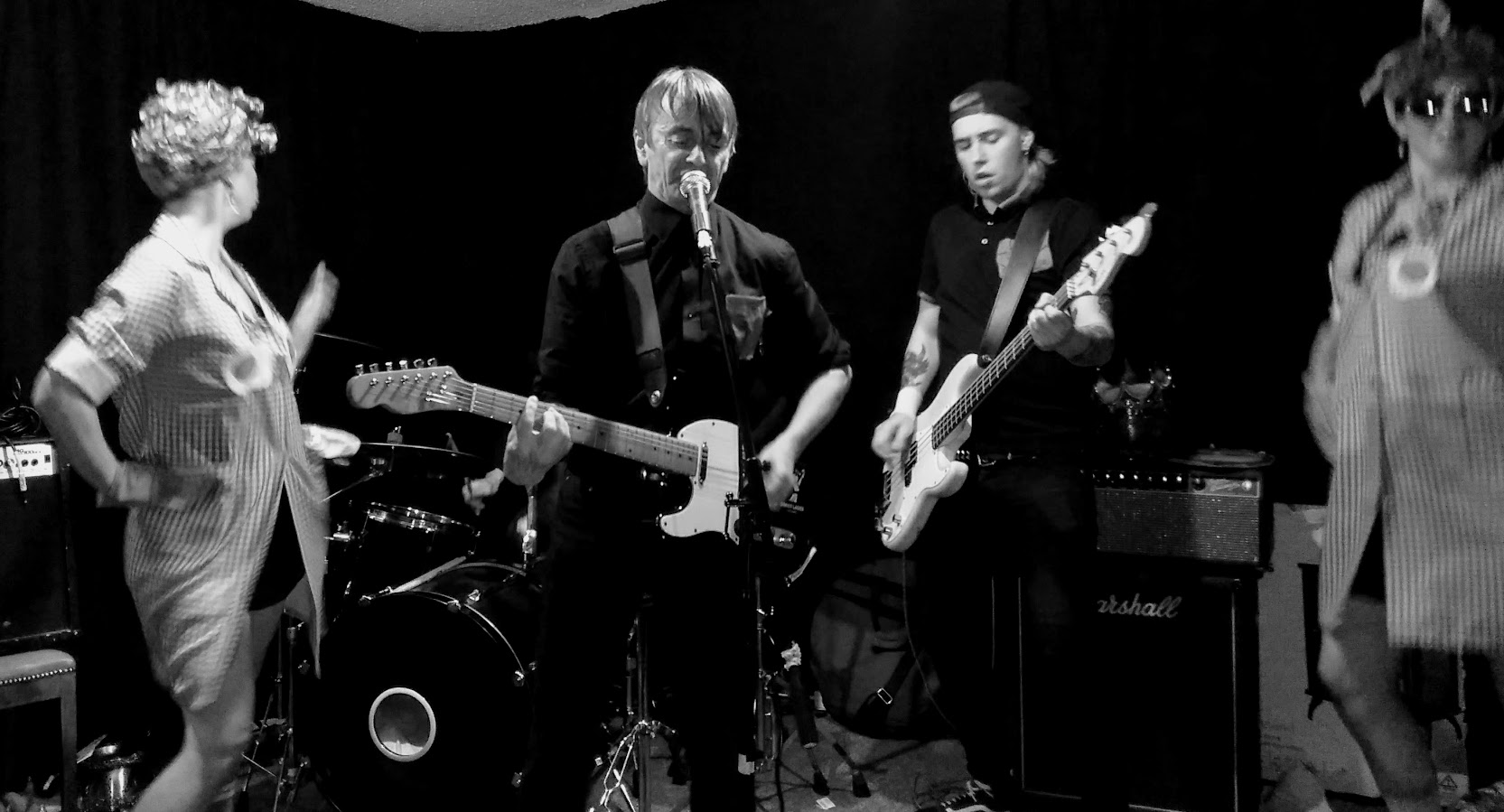 Picasso Sisters – a male duo feat; Bernie Carroll and Al (Chez) Cherry, who performed at the open air ‘alternative jubilee’ gig in 1977. Thought to be a part of the Matthew Street/Liverpool School crowd. Bernie now does posters to be seen in more or less every Liverpool pub, while Chez is with the Skiffle Dogs

Pink Moon Recs – started as a retail shop in Lpool in 1986 and developed a label in 1988. Now operating as a mail order outlet from Birkenhead. Dealing in all types of music and specialists in Liverpool and Merseyside indie from early 1980s to present day.. (website)

Planet X – punk venue a club owned and run by Doreen Allen (Jun83), who was secretary of Eric’s throughout its life and then office manager for Inevitable Records. Kenny Dorick (Ex-Post Facto) was the promoter in late 80s. Began life at Macmillans on Concert Street (for about 8mnths), before moving to Temple Street. Closed in 1993.  Club reopened for 25yr renunion (May08), and began operating again (with Doreen at the helm) with occasional nights. Phil Newall runs a website full of old pics

Platnum-Hi – band 1984-86, feat; Peter Bowe (voc), Graham Pritchard (gtr), Rob Rea (bass), Martin O’Hara (drms). Apart from Rob the band had been Split Pig and Kracken. Moved to London and started the usual rounds of The Ruskin Arms Marquee Club, Half Moon, Royal Standard etc.Their largest gig was to 8000 at the Tamworth Music Festival 1986? when they took a move up the billing after the original headliners didn’t show. Wolfesbane headlined the following evening. The band split when Graham left 3mnths later after a period of no work, he went on to write several songs with friend Clive Burr but no publishing was sought. Rest of band became Lo Girls

Plato’s Ballroom – venue (c1981), odd weeknights at a club off London Road called Pickwick’s set up by Arthur McDonald & Nathan McGough (both at the time of Royal Family & The Poor). Gigs were the Bunnymen, when the stage was covered in camouflage netting (Frantic Elevators supporting ?); New Order, Cabaret Voltaire, Durutii Column; China Crisis (supporting New Order?); Dead Or Alive; Jah Wobble with Windows supporting and Frank Clarke and Alexandra Pigg (writer and co-star respectively of “Brezhnev”) doing a dance effort between bands, feat lots of naked flesh and simulated sex. Same venue also hosted other gig nights, under various names. Geisha Girls played with a pick-up band called Sphinx fronted by Nik Turner – they had very little gear and ended up using a lot of Geisha’s, incl keys, their guitarist had just been brought in and didn’t know much stuff, Roddie Gilliard ended up jamming a whole bunch of old Hawkwind tunes with them

Plenty – band (mid80s), feat; Brian Hulse (gtr) and Dave Jones (bass) (both ex A Better Mousetrap), Tim Bowness (v0c) and Michael Bearpark (gtr) (both ex After The Stranger). Tim had orig met Brian and David when he auditioned to be the singer in A Better Mousetrap (1983). Although not right for the band at the time, a mutual respect led to Tim and ABM keeping in regular contact, and Brian sessioned on Tim’s LP in 1986. Rel eponymous 3 track cassette EP (1987). Shortly after, Michael left and the band carried on as a trio, and  this more stable line up produced 2 further cassette releases; ‘Sultry Songs (for swinging celibates)’ inc Life Is Elsewhere, which later became a staple in No-Man’s (the band Tim  formed with Porcupine Tree’s Steven Wilson) live set.  Had 2 tracks on dbl vinyl comp LP (curated by Steven Wilson and with a cover designed by Bowness) called ‘Double Exposure’.  Plenty performed live twice in 1988, at the Concert for Comic Relief at the Queen’s Hall in Widnes and at the Studio Theatre in Cronton, and rel ‘Stripped (For the sake of St. Anthony)’ 7 track cassette (late88). Split in 1989 when Tim moved to London and joined Steven Wilson in No-Man on a full-time basis, although in early 90s Tim, Brian and Michael rec and rel a new cassette, ‘Swanky (A Beginner’s Guide To Love Motels)’. In late 2009, Tim, Michael and Brian Eno collaborator Peter Chilvers decided to revisit the songs of Plenty and rec an album’s worth of material with the aim of playing live again.

Poisoned Electrick Head – St Helens prog-punk band formed 1985. Began playing the ‘squat’ circuit in Liverpool & noted for wierd shows & wonderful costumes. Rel LP on their own label in 1992 with prize money from a Battle of The Bands competition, it hit No.19 in the Indie Charts. 2nd LP was on tape only thru mail order called ‘Umistakeably Rainbow Trout’. In spring 1994 having signed to Abstract the single “Out of Order” charted at No.1 in the Indie charts, followed by the LP “The Big Eye Am” which made the top 30 (26). Played a Dutch squat “demolition” party, which ended in band and audience being doused with vats of human excrement! 4th LP ‘The Hanged Man’ rel 18.11.96.

Pontoon – ‘In A Couple Of Weeks’ feat on ‘Unearthed Liverpool Cult Classics Vol 3’ (on Viper Recs) and had a trk ‘The Spider Song’ feat on the ‘Great Acoustic Experiment’ LP again on Viper.

Position 69 – Formed in Liverpool during 2002, though no longer active. Could be described as a Metal/Punk group in the style of Blink 182, main man being Dave Cruise, who was also a member of Babies On A Hook at the same time.

The Press – early incarnation of Afraid of Mice, feat; Philip Franz Jones, Geoff Kelly, Roddie Gilliard (now of Muffin Men, but check his profile), & Clive. After taking a year out following the breakup of Next, Phil & Geoff began writing new material, Roddie and Clive joined, rec demos and played loads of gigs around Cantril Farm and Huyton, before moving into town.

Probe – record shop run by Geoff and Annie Davies, orig based in Clarence St (opened Jan71), before moving to Wood St. They also had a market stall at Silly Billies. The shop was a focal point for the thriving local scene in the 80s & the likes of Julian Cope, Pete Wylie & Pete Burns have all worked there.

Probe Plus – label run by Geoff Davies of Probe.

Public Disgrace – band, feat; Tudor (gtr) (later Das Reiner, Dementia, Gone To Earth), Andy (voc), Dave (bass), Cally (drms) (also a train driver). Rel ‘Toxteth’ EP on Probe Plus PP2 came in a B&W fold out sleeve in about 1982, it named checked ‘Oakey’ on the cover – a legend amongst the L’Pool punk community. Tudor was named after the crisps (being a Geordie), Cally (Brian Callaghan) sadly died of a heart attack 2.10.08 at the Standard Liege v Everton match..

Pure Morning – Formed in late 1993 in the sleepy Liverpool outpost of Crosby by Ade Blackburn (voc,gtr,keys) and Hartley (gtr,keys). Self rel their 1st single ‘I Don’t Want You Around’ on Kool Tone KT002 in Mar94. This led to a 2nd rel on the Amulet label ‘Sick Profit’ (Amulet 01) in Oct94. This in turn led to the attentions of Radarscope Recs who signed them at the beginning of 1995. In total 3 singles were rel before an LP was put out ‘2 Inch Helium Buddah’ (Scan CD/LP) during Jun96 and then they called it a day, reforming as Clinic