Half Man Half Biscuit – record label run by Instant Agony, which lent its name to the B’Head band. Rel 2 singles in 1982.

Half Man Half Biscuit – Birkenhead band feat; Neil Crossley (bass) (ex Venomous Youth) & Nigel Blackwell (voc,gtr) (ex Split Gut, North of Watford), Simon Blackwell (gtr), Paul Wright (drms) (both ex Attempted Moustache, Mr Zero, Bisquits), David Lloyd (keys). Rec their 1st LP for £40 & Probe Recs rel ‘Back In The D.H.S.S’ (1985) & John Peel became a big fan, the LP became the biggest-selling independent record of 1986. The follow-up 1986 EP, The Trumpton Riots, & when 2nd single, Dickie Davies Eyes hit No1 in the independent charts, the band decided to split, even though their popularity was still on the increase. A year on a 2nd LP of Peel Sessions & new unused tracks was rel posthumously called ‘Back Again In The D.H.S.S’ They reformed in 1990, with the same line-up. Rel single Let’s Not, then a bizarre cover of the old Edith Piaf song, No Regrets, feat Liverpool actress Margi Clarke. Still on Probe Recs an LP ‘McIntyre, Treadmore And Davitt’ was rel. LPs came out every other year & Paul was replaced on drums by Carl Alty (later of Joyrider) in 1993. A year on, Nigel’s brother Simon also left, and Neil moved onto guitar, with Ian Jackson (ex Jegsy Dodd & The Sons of Harry Cross) on bass. 1996 saw a settled line-up. Ian left and Neil returned to the bass – Ken Hancock (gtr) (ex Jegsy Dodd, Fishmonkeyman). Carl Alty left with Carl Henry (drms) taking over (although Carl A. did continue to appear occasionally at gigs until xmas ’96). The new line-up (incl, Carl A.) rel an EP Eno Collaboration 1996, and played a series of one-off gigs around the country, the band continue to rel LPs every 2 years & play sporadic gigs. 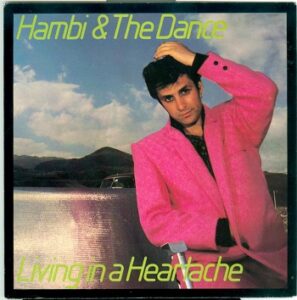 Hamilton Club – venue in Birkenhead, which held the occasional Punk nights, inc; Instant Agony, Abort The Attack, Unit Q. After closure in the mid 80’s remained empty until being bought by Mr O’Connor, who also owned Ruperts Night Club. Was extensively refurbished and reopened as The Pleasuredrome – a very late 80’s cash happy venue. This eventually lost its appeal and the club began its demise, ending up as a hardcore rave venue with all the trouble and problems that went with that scene. Finally closed in 2000, and was demolished in 2001 – now the site of an office block.

Harmonics – band (1980), orig called The Frets. Soon changed their name to The Fourmers

The Hat Band – feat, Marty (bass), Des (keys), Mark (voc,gtr,sax), Stu (perc), Ed (trmpt), Sharlene (voc) and Chris (drms). They have played in and around Liverpool since early 2003, inc; Zanzibar, the Everyman Bistro, the Casbah Club and the Casa. Most of the members are also members of various other bands, Sharlene also contribute vocals for Shakti, Marty (ex- Zeb) is one of Snappertronics (contact)

HeeBieJeeBies – Popular club that presents a variety of different themed nights thought the week. Highlight being EVOL every Friday with DJ sets from Ladytron and Bugged Out 10pm-3am, and at £4 its a steal. Now closed down.

Heron – A modern one man band? Well not in the style you would expect. Born and Christened as Robert Heron in L’pool, Heron is known as Paul Heron and began performing music, a sort of lo-fi blues after being inspired by Beck. Heron does everything himself, writes, performs, produces and even designs the artwork. Having done this he initially rel it on his own label Cracked Analogue. The first rel being ‘B-Sides Vol 1’ (CA 001 in Jun01). This feat the brilliantly titled ‘Punk Mothafucka’ A 2nd single ‘B-Sides Vol 2’ (CA 002 in Nov01 was rel which caught the attention of Virgin subsidiary Hut Recs. Hut gathered together the previous singles and added some new material and rel the LP ‘The Brown Room’ in March 2002 (HUT CD/LP 73), which was an odd but attractive mix of blues, hip-hop and even techno.

Hev’N & Hell – venue on Fleet Street, L’pool – No sooner had Flares become 24-7, than it now gets a new paint job and becomes Hev’n & Hell with the motto ‘Make noise not love!’ Not sure about that, I mean what’s wrong with noisy love? Still offering all your favourite indie/punk sounds.

High Five – band, feat; Paul Hayes (gtr,voc). The name derives from a cult TV show in which alien criminals are sent to Earth, and promptly begin to do battle with the humans!. Rel the singles ‘ ‘Catawba’ 7’/12′, ‘Cold Steel Gang’, ‘Just Another Girlfriend’ 7’/12′ and their most popular song ‘Working For The Man’. LP ‘Down In The No Go’ rel 1986 to unfavourable reviews, the NME stated that the best thing about it was the sleeve! (Track listing 1. Cold Steel Gang 2. Children Of Change 3. Billy McGuire 4. For All To See 5.Days And Nights 6. Turning 7. If They Come In The Morning 8. The Curse 9. Hard Line 10. On The Banks BONUS TRAX 11. Confessions 12. Turn This Car Around)

Higsbosun – rock-indie band from Waterloo (formed 2008), feat; Sam Mercer (gtr), Steve Parratt (bass) (ex Kinkdale), Kris Purcell (voc), Craig Owen (drms). Steve describes Waterloo as a ‘bit of a shitpit but as they say destruction breeds creation! We currently have 3 songs: Contrabanned, A New Day and Out of Luck, but have roughly an album and a half / 2 short albums worth of material ranging from heavy blues to tight rock to strange acoustic.’ (website)

Hokum Clones – Liverpool duo of Robby Stevenson (voc,gtr) and Danny Roberts (voc,gtr,hrmnca). Formed summer 1999 following a chance meeting in a Liverpool book shop, and soon went out on tour with The Coral

Holly – solo recordings by Holly Johnson (ex Big in Japan later of Hollycaust, Frankie Goes To Hollywood). Rel 2 singles in 1979, Yankee Rose, Hobo Joe on Eric’s label. Debut gig was in Corby supporting The Spitfire Boys, where he & the band had to be escorted out of town under police protection. On at least one side of Holly’s solo single on Inevitable the backing band is Wah! Heat (Wylie/Rob Jones/Pete Younger), who were in the same studio recording “Better Scream.” More info req’d. (website)

Hot Carls – Another new group to emerge from the vibrant Liverpool scene (2004). Feat; Sam (gtr,voc), Ste Kelly (bass), Rich (drms). Play a sort of high energy punk type thing, and have been generating a fair bit of interest with regular gigs at all the crucial venues (Barfly etc). The group are also famous for being comprised of very tall people!!

Hot Dick – early name for Supercharge who changed their name once they realised they weren’t getting much work!

Hurricane – band from Maghull (c1987), played 1st gig at Maricourt School where they did rock covers, with a drum machine & a rhythm guitarist that mimed! More info req’d.

Hurst, Peter – former guitarist with Marshmallow Overcoat and Whiskey Priests. After W.Priests split up he became a trainee sound engineer at Station House Studious with Phil Burns (later of Reno) as his mentor. Pete moved to London to further his career and ended up working with many successful artists including Rebel MC and bizarrely Sinnita (remember her?). He also worked on many of the early releases in the so called “speed garage” genre. And then worked for the Tidy Boys, a remix team who had great success in the 90s remixing mainstream pop acts for major record companies. Pete also rel some stuff of his own under the name Discocaine. He left London in the late 90s and moved first to Greece and then Spain. He now lives in Norway with his partner and child, and is currently a sound engineer for live bands in Norway. Had a track New Brighton Through The Binoculars of The People on comp LP ‘Ways To Wear Coats’ (Brilliant Genius recs Oct86) was recorded at Station House Studios and was a collaboration between Peter and Pete Pulford (ex Whiskey Priests) although Pulford did not demand any credit. The title is taken from a chapter title in a novel by the American author William Burroughs called Cities of the Red Night. The original title having TIbet instead of New Brighton