Black Velvets – Perhaps Liverpool’s most pre-eminent ‘rock’ act – they play big loud songs that have been described as a healthy cross between Led Zep and AC-DC, with more than a hint of T-Rex thrown in. Four piece comprising Paul Carden (voc), Robbie Ross (gtr), Dave Dutton (bass) and Nick Kilroe (drms). Formed at the tail end of 2002, and have rapidly raised their profile playing support to no less than The Who, and The Killers. They attracted the attention of Alan Wills at L’pool indie Deltasonic who arranged a management deal with Sanctuary Home of mega stars Destinys Child. This in turn led to deal with Vertigo Recs who will be rel their debut single ‘Get On Your Life’ at the end of Nov04 – a ltd edition in real black velvet sleeve.. oohee pop lovers. Not bad for a band named after an Alannah Myles song!!

Blaze – 8 piece cabaret/lounge band that existed in L’pool for all of 2 weeks sometime in 1999. They played easy listening/jazz cover versions. All this would’ve been very boring had the manager not aquired the services of one Duncan Black on guitar. He applied for the position through the job centre in Bangor, North Wales – it was part of Labour’s ‘New Deal’ scheme. Mr Black decided to ‘pep things up a bit’ using beer and FX pedals. He turned Carpenters songs into ambient experiments and ‘Mustang Sally’ into a funk/metal song. He lasted one gig at Jodies before the manager sacked him for ‘being immature’ and ‘flicking the vees’ onstage. The band split the next day. A VHS recording of the gig is knocking around somewhere – if you own it, please contact Duncan.

Blitz Brothers – were basically Dalek-I Love You with a few friends, inc Steve Lovell (gtr) (ex Hollycaust, Hambi & The Dance, Tontrix, Julian Cope). Dalek-I were signed to Vertigo Recs so its not really a shock to note that the Blitz Brothers only rel also came out on the same label – ‘Gloria/Songs/Records’ 7″ single in full picture sleeve BLITZ-001 in 1979

Blitzkrieg – Southport based hardcore punk band, formed 1979, feat; Mic ‘Spike’ Rophone (voc) (later of Parasites, Paradox UK, Retch Recs), Gary ‘Gaz’ Sumner (gtr) (later of Insane), Chris Hind (bass) (later of Mayhem), Phil Din (drms). Played many gigs throughout the North & feat on ‘Country Fit For Heroes’ comp in Jan’81 with The Future Must Be Ours. Phil was replaced by John McCallum & they signed to No Future recs rel Lest We Forget EP (#11 Indie Charts 1982) followed by a UK tour with Mayhem & Varukers. John left to be replaced on drums by Bambi (later of Insane, Parasites) & they rel Animals In Lipstick on Sexual Phonograph recs (#30 Indie Chart 1983). They split soon afterwards after arguments. They reformed in late 1987 feat Spike, Gaz, Bambi & Trev (bass) (ex Insane). Reformed again in 1988 feat; Gaz Sumner (gtr), Ales (gtr), Freddy Doyle (drms), Spike (voc), Mal (bass) & did a chaotic tour with North Wales punk band 4Q. Then reformed yet again in 1990 & rec the LP ‘Future Must Be Ours’ on Retch recs. A retrospective split LP with Insane was rel on Capt Oi! recs in 1997.

Blown To Bits – Long running punk fanzine edited by Bazzy from Widnes (also voc for Bazzy & The Budgies). Ran for about 20 issues in late 80s/early 90s. Noted for its own cut & paste style & bad grammar, but also very popular. Many issues came out in different coloured print. A5 size.

Blue Angel – For reasons lost in the annals of time it is known as ‘The Raz’; very popular all week particularly with students. 108, Seel Street, L1

Blue & White Plastic Tray – one of the many names used by members of Sharon & The Slobz, see also Sister Moon, Cyclic Amp.

Boat Party – Crosby classic rock band (formed 1984), feat; Nick Robinson (bass), Paul Thirwall (voc,gtr), Bat Masterson (drms), Derek Finn (keys). Nick is brother of Blue Poland’s Nigel Robinson and says, ‘We formed in 1984 whilst still at school.got great reviews in Sounds from Kev Ssampson when we were 15.’ They went through a few line up changes and played at lot of the Gigz For Kidz. Self rel a single Bullets Fly (1986).

Bob, Bob, Bob and Bob – Birkenhead band (formed 1986), Played hundreds of gigs, made some records and recorded some Peel sessions before finally calling it a day in 1996 due to the fact that they were too old and fat to carry on. Talked into reforming for a gig with Undertones at The Pacific Road Birkenhead in 2005 on the promise of free beer and pies. Have said they will play one last gig to celebrate the death of Margaret Thatcher. Hurry up and die you bitch.

Bobby Arnold Band – (1980-83) feat the multi award winning country guitarist Bobby Arnold (later Kenny Johnson and Northwind), Leo (voc,gtr), Mark Singleton (gtr,keys,voc) (later Now Hear This, Gambler, Afraid of Mice). Bobby sadly passed away in 2002 but will always be remembered with great affection by hundreds of musicians throughout the NW coast who admired his wonderful playing skills, particularly Mark Singo to whom Bobby was a great friend and mentor 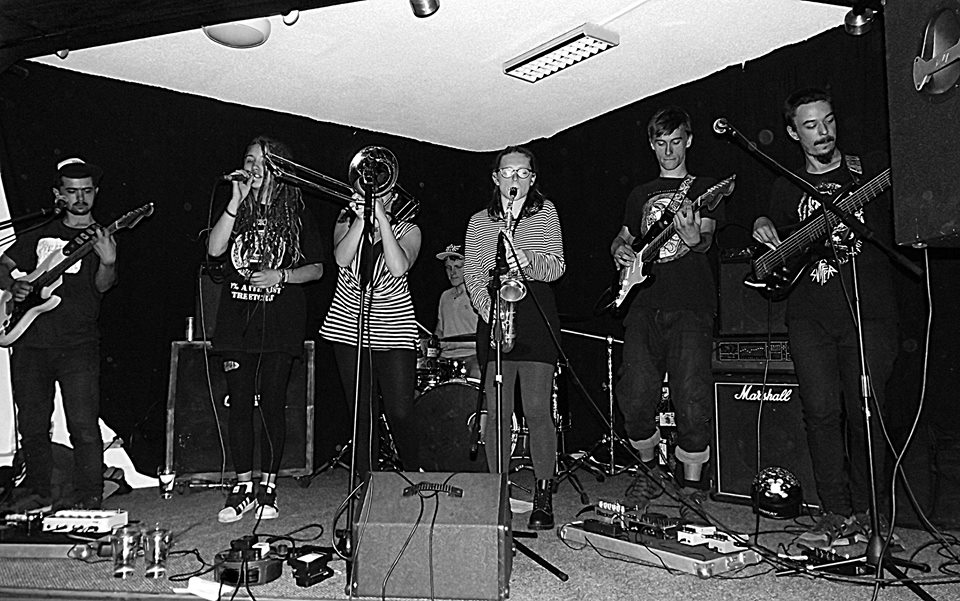 Bombsite – punk fanzine and original name for the band Why Control. Run by Mart and Grom from the band. Ran for a year from early 1977 for 3 issues. (website)

Bone – Formed in 1990 from the ashes of Modern Eon, after the collapse of Eon Bob Wakelin, Danny Hampson, and Joey McKecknie reformed as Bone. They managed just one release, an EP titled ‘An Arm And A Leg’ for the Belly Up label before calling it a day. For reasons not explained Bone were also known as This Time Next Year.

Boo Radleys – band (1988-99), feat; Martin Carr (gtr), Sice (voc,gtr) (also Eggman), Steve Hewitt (drms), Timothy Brown (bass). Rel LP ‘Ichabod and I’ (1990) & Rob Cieka replaced Steve on drums. Signed to Rough Trade & rel ‘Every Heaven’ EP (’91) & then signed to Creation & rel ‘Everything’s Alright Forever’. 1993’s ‘Giant Steps’ was rel & made some impact in USA.. 1995, the more pop-oriented ‘Wake Up!’ was the band’s commercial breakthrough, debuting at number one. The bright, horn-driven single Wake Up Boo entered in the Top Ten with the follow-up single, Find the Answer Within making Top 30. ‘Wake Up!’ was rel in US autumn ’95 with no promotional push from Columbia, who dropped the band early the following year. 1996 saw ‘C’Mon Kids’ debuted in the Top Ten but it soon fell off the charts, despite overwhelmingly positive reviews. Early in 1997, the band finalized a US contract with Mercury, and C’Mon Kids was released in March.’Kingsize’ followed in late 1998, though the group officially broke up just months later. Rob Harrison (drms) (ex Jules Verne, Bulah Wig) also played at some stage

Bop Til Ya Drop – gig night at The Old Police Station, Larks Lane in Sefton (c1979), many shows took place promoted by Garry Gannicliffe, ‘They proved very successful until I was asked to pull the gig by the police after 200 or so mods raced up and down Lark Lane on their scooters terrifying the local residents after invading the stage in support of their favourite band Zeebra swinging their crash helmets to the beat.
Unfortunately no posters remain of the Zeebra gig as the mods ripped them down after the gig.’ Garry went onto to help promote Larks In The Park festivals.

Borland, Adrian – Following the split of The Sound, Borland rec a further LP as ‘Adrian Borland And The Citizens’ which was rel on the European label Play It Again Sam. Borland continued in music throughout the next two decades, producing other acts and rel another batch of under-appreciated recs as a solo artist and as a member of a couple side projects (the Honolulu Mountain Daffodil, White Rose Transmission). On April 26, 1999, Borland took his own life. Thanks to the Renascent label’s reissuing program in the late ’90s and early 2000s, the Sound’s discography has been restored and revitalized.

Brain Donor – A side project of Julian Cope’s – released the album ‘Love, Peace And Fuck’ on Impresario label in late 2001. This was followed by a couple of singles ‘Saw Me Coming’ and ‘Get Off Your Pretty Face’. more…

Breakout – fanzine from Formby, L37 ran by Neil Tilly from Apr81. Neil then promoted gigs at Left Bank Bistro in Matthew St until Jan83. Continued to promote bands at Lincoln Inn, Venus Club & Bier Keller. Zine grew in circulation to 25,000 & in 1985 he formed a label under the same name & rel a single for Foundation. Everything stopped in Oct85 when Neil started to manage Change To The East. Paul Robinson (ex Stun The Guards) was also involved with the zine

Brian’s Diner – venue in Stanley Street. This was where the Bunnymen invited the early arrivals as part of ‘Crystal Day’. At one point most of the L’pool movers and shakers could be seen there during the day, Cope, Balfe etc were regulars. Other small groups seemed to do free shows there on an occasional basis, incl Hello Sunset 1985

Brickhouse – Birkenhead soul / funk band circa mid 90s. Their guitarist was Charlie Landsborough Jnr and their bassist was Jamie Roberts (RIP) who’d been in No Bitches and Radio Blank.

Pete Burns – front man of Dead or Alive (05.08.59 – 23.10.16) born in Port Sunlight. Worked in Probe Recs in late 70s and was briefly in Mystery Girls, before forming Nightmares in Wax and by 1980 he’d changed their name to Dead or Alive and headed to the No.1 slot in 1985 with You Spin Me Round. Known for his sexually overt and flamboyant appearance and cosmetic surgery, came back into the spotlight when he appeared on Celebrity Big Brother TV show (2006), and then Celebrity Wife Swap (30.09.07)