Back To The Beat – blues-rock band from the Wirral. Had track On Your Way Down on Blues Vol2 comp tape (Oct86) 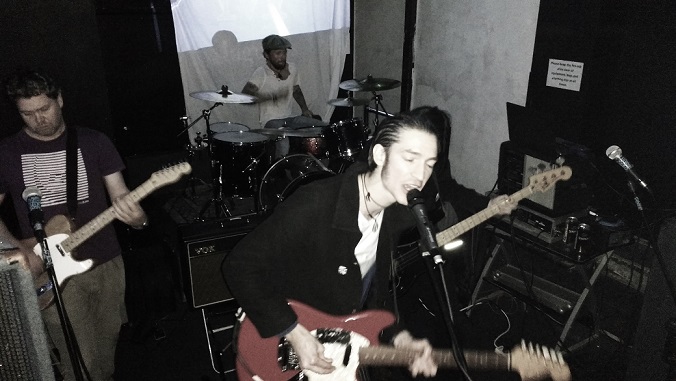 Balcony Dogs – name under which the Sex Gods had to use after pressure from their rec co. Island.

Dave Balfe – (b.1958) stand in keyboard player with Teardrop Explodes before founding Zoo and Food record labels, signing Blur and for being the subject of their No.1 hit – “Country House”. Grew up on The Wirral and was also in Big in Japan, Dalek I Love You before playing on and co-producing the first Echo & The Bunnymen and Teardrop Explodes albums. Managed Strawberry Switchblade, Zodiac Mindwarp, Voice of The Beehive, Crazyhead, Diesel Park West and others before hitting it big with Jesus Jones, and even bigger with Blur. He sold the Food label to EMI in 1994, quit the rat-race and retire to the country – inspiring Damon Albarn to pen Country House. Briefly worked for Sony in 1999. Since then Balfe has received a BA in Creative Writing from the University of Bedfordshire in 2003. In 2006 he completed an MA in Screenwriting at the University of Westminster. He still lives in the only UK house to have a number one song written about it.

Bandito – one off name for Eleanor

Bandits – 6-pc band (2002) all in early 20s. Feat; John Bandit (voc) (later Pedantics), Richie Bandit (gtr), Gary Bandit (gtr), Scott Bandit (bass) (later Pedantics), Tony Bandit (keys), Swee Bandit (drms). Rel single The Warning. After this they put out a ltd edition single double A ‘On My Way/Once Upon A Time’, followed by ‘Take It And Run’ and ‘Two Step Rock’ both of which made top 40 placing, the album ‘And They Walked Away’ late 2003, the band has been championed by Noel Gallagher, and much of the album was recorded in Noel’s studio, where 60’s/70’s guitar legend Alvin Lee was guest musician on a reworking of ‘The Warning’, split 2005.

The Barfly – Venue, (2002 onwards), based above the Masque on Seel St. Part of a nationwide chain – there are Barflys in Birmingham, Brighton, Cardiff, London, Glasgow, and York. Puts out its own regular magazine, The Fly.

Barrett, Norman – vocalist-guitarist of Gravy Train who did some solo shows in L’pool 1985-86.

B Art – fanzine by Bern Moore from Mossley Hill Drive, L17 – an arts / graphics / music / culture magazine that was handmade in the size of a postcard

Beach Bastards – formed 1986 following a drunken idea by John Talbot (voc) (aka Rock Salmon) who wondered what a musical cross between the Beach Boys and the Jesus and Mary Chain would sound like. (Answer: The Ramones actually). Also feat; Chris Larsen (bass) (ex Lawnmower, Blue Poland), Mike Kempton Campbell (bass) (ex Paper Tribe, Heart of India), Paul “Shafty” Parry (gtr) (Johnny had met him on holiday on Tenerife, Shafty rehearsed for an upcoming gig by listening to a walkman of early songs while on the beach). Rel “Son Of A Beach” in 1989 on the Disturbocharger label DIST 1 and all but finished playing in the mid 90s. Supported some big acts of the day inc The Buzzcocks and Beats International among others but only ever attracted a cult following themselves. They are however, still very much together albeit not physically or mentally. A big claim to fame was that they were alledgedly one of Joey Ramone’s fav bands.

Beat Route – rockabilly band, Rockabilly band (formed c1984-85) Les Green (gtr), Dave Wilkinson (gtr), Peter Brown (bass), Pete ‘Tags’ Taylor (drms,harm). busking and playing local spots like The Mayflower and Rumfords (which later on was called The Coach House before the footballer Tommy Smith bought it hence Smithy’s Coach House). They ended up on the Sefton Area Bands Association LP ‘Twist & Samba’ (Oct86) with the track Mucho Macho Man, after the people who were running it saw one of their gigs at The Kingsway in Southport. Band split mid87

Beggars Belief – band formed Feb04 by Tony Cosgrove (voc) (ex The Clear), with Nathan Sayer (drms) (ex Afterglow, The Clear), Terry Fletcher (gtr) Dan Forrest (bass). The Lennon esque track “Little Girl” is on ‘Songs from the Riverside’ comp LP (Audio Visual Recs). Have recently secured support dates with Smaller & Tramp Attack, and are currently in the process of planning a small UK tour to coincide with the release of a DVD documentary and EP on their Warm Gun label (website)

Be La Deuce – band formed 1980, feat; Richi Riding (voc), Alan Gillibrand (gtr), Paul Grivosti (bass), Graham Chesters (drms). Rel 6 track demo (1984) & had track You Play About on Jobs For The Boys comp LP (Jan85). Formed after Richi and Alan had been playing the pub circuit since 1977 in various bands. Changed name to Louie And The Lettermen

Pete Bentham – legendary musician and tireless promoter (born in Widnes). Fronts Pete Bentham & The Dinner Ladies and runs the Free Rock & Roll nights in Sound, (prev at Mello Mello) since 2008. Was in Halfway To Eddies (c1988) then OUT.

Berlin Press – was a fanzine put out by B Art

A Better Mousetrap – band (1981-84), orig line-up feat; Steve Ashton (drms), Peter Goddard (voc), Brian Hulse (gtr),  Dave Jones (bass) (both later Plenty), Tony Wretham (keys). Ashton was replaced by Steve Eastwood (later Change To The East, Fragile Friends) and that line up rel Trivia which was reviewed in Sounds, Peter left (Jun82) and was replaced by Tony Egan and they rel Furniture. Tony Egan left and they continued as a 4 piece. Rel Endings & Exits. Steve quit & they became a 3 piece and & rel ‘Lines’, one track of which was on the Rockzene comp that Dave complied (1983).

Betty Curse – death pop goth band (c2006) feat; Betty Curse (aka Megan Burns b.1988) who appeared in the zombie film 28 Days Later. Drowned In Sound said, ‘Not content with being a total nutter AND having no real ability to write her own songs, she had a lot of help from Eugene Kelly, Davey from the Crimea and Andy Huxley from the Eighties Matchbox B-Line Disaster. God knows how the album will turn out’ (website)

Beyond The Implode – DIY punk band from Runcorn, 3 line-ups! Initially (1979), Eddie Smith (voc,gtr), Frank Hughes (bass), Ian Gardler (bass) and Mike Gardler (gtr). This line-up rec the “Last Thoughts” EP on Diverse Recs (Cat No. DIVE 101) 250 numbered copies, 150 distributed by Rough Trade in London, the rest sold via Probe, Penny Lane and Virgin in L’pool and Paw Recs in Runcorn. Rough Trade asked for more but as Eddie says, ‘Hey man, the bird had flown, this was D.I.Y. not EMI.’ 2nd line up (1980) was Eddie Smith (voc), Ian Gardler (bass), Kev Shields (keys) (later Havoc Fusion) (from Runcorn), Keith Discreet (bass) (later Avant Garde Elitists) and Nick Evans (drms). They got some of their mates to do backing vocals; Peter Thomas (DJ at Swinging Apple) and Ste O’Leary. This was the line-up for the 2nd EP “11th Hour Breakdown” (DIVE 102). 250 copies, some sold via the L’pool rec shops but the majority were off-loaded to Paw (who went bust, stored them in the owners garage for years and finally trashed them about 10 years ago!). Line-up No.3 was Eddie Smith (voc), Kev Shields (keys,drm machine), Paul Randall (bass), Mark Brackley (sax) and Marshall Parsons (gtr), Keith Discreet did rejoin for a short while. They rec some tracks but never rel them. Frank became rec engineer for Open Eye recs.

Bido Lito! – The Liverpool Music Magazine, run from Roscoe Lane and edited by Craig Pennington. Found in all the hip shops in town (website)

Big – this is The Balcony under a different name, rel ‘Bright & Guilty World’ on All This & Heaven Too comp

Big In Japan – band formed May 1977 (orig called Sausages From Mars), feat; Bill Drummond (voc,gtr) (later of Lori & The Chameleons, KLF), Kevin Ward (voc,bass), Phil Allen (drms). After a few gigs they were joined by Ian Broudie (gtr) (later of Lightning Seeds) & Jayne Casey (later of Pink Military). Clive Langer (of Deaf School) also played with them at some point & is on their 1st single Big In Japan on Eric’s recs in 1977 (a split single with Chuddy Nuddies). Kevin & Phil left soon afterwards to be replaced by Holly Johnson (bass)(later of Frankie Goes To Hollywood) & Peter ‘Budgie’ Clarke (drms)(ex Nova Mob later of Slits, Siouxsie & The Banshees). After 6 months of intense gigging Johnson left to pursue a solo career replaced by David Balfe (ex Dalek I Love You, later of Lori & The Chameleons, Teardrop Explodes, Food Recs). Having being expected to sign for Stiff Recs the band felt the pressure & split, playing their final gig at Eric’s in Aug78. Bill Drummond rel a posthumous EP From X to Y & Never Again on his own Zoo Recs in ’78