If you’re a music lover, you’ll recognise the symptoms I’m about to describe. You can be anywhere doing anything but music will be playing in the background via one source or another when suddenly, completely without warning, an unfamiliar song will hit you between the eyes (and ears) and for its duration you will be unaware of anything else going on around you. In the fullness of time it may or may not come to take on a fundamental meaning for you but in that first, awe inspiring moment it will have truly made the earth stand still. I’ve selected ten songs from my formative years to illustrate my point – read on (or better still, listen in) and enjoy.

THE WHO – “MY GENERATION”
I can’t be certain but I think it must have been “Ready Steady Go” that The Who were performing “My Generation” on, but the impact was to transfix a 6 year-old me more used to those nice, polite Beatles being beamed into my living room at teatime via the gogglebox. The Moptops matching suits and harmonised “whoos” were absent and in their place was a guitarist who was arms and legs akimbo and a drummer whose deranged demeanour was the very antithesis of cuddly Ringo, though at least the bassist seemed to be behaving himself. At the forefront of this mayhem, however, was a singer who seemed on the verge of literally leaping out of the screen to assault me and nick my teatime beans on toast, a prospect I found quite worrying particularly because Mum seemed far more concerned about his apparent speech impediment. Rock n roll had suddenly become much darker and dangerous and I was a willing acolyte – I still wasn’t going to share my beans on toast though!!

STEVIE WONDER – “I WAS MADE TO LOVE HER”
There was disappointingly little pop music on TV at this time and establishment radio was also pretty awful, but I had the coolest mum on the planet (OK in Kinmel Bay, at least) so she would always have Radio Caroline playing throughout the day. At that time it was a pirate station with its finger on the pulse so I’d already been exposed to some of the smoother elements of Tamla Motown, but even that didn’t prepare me for that moment during the school holidays, sitting by the old Pye radiogram,  when an explosion of guitar and harmonica heralded a voice that declared undying love with a passion and ferocity that hit like a punch to the stomach. There are better known and better selling songs in the Stevie Wonder canon of course, but this is the one that made me realise that there was more to music than loveable moptops  and surly Stones.

T REX – “JEEPSTER”
The early 70s arrived and Top Of The Pops had established itself as essential Thursday night viewing, as comfortable, predictable and reassuring as a favourite cardigan and therefore highly unlikely to challenge the status quo. I managed to miss T Rex’s first appearances on the programme, mainly because my rehearsals as flugel horn player with the Point Of Ayr Junior Silver Band clashed with TOTP. Freed from endless (bad) renditions of “The Floral Dance”, I finally got the chance to catch T Rex and, more specifically, Marc Bolan for the first time. My initial reaction was “My god, he’s pretty”,  which was pretty confusing for a heterosexual adolescent growing up in an era where homophobia was compulsory, while my second impulse was to go out and buy “Electric Warrior”, the first LP I ever owned. He released better singles, but it was this song that popped my Bolan cherry and made my decision to forgo my career in brass music the correct one.

ALICE COOPER – “SCHOOL’S OUT”
So glam had normalised the idea of guys in make up and turned Bolan and Bowie into the prettiest stars (The Sweet still looked like bricklayers, no matter how much slap they applied though!!!). Settling down for another Thursday night of standard TOTP fare, there was a sudden “Bam-ba-da, bam-ba-da, bam-ba-da-dawm” and the camera  settled on a figure that can only be described as deeply unsettling. Kinda glam, but the hair was longer, lanker and more unkempt, the make up was vaguely satanic, he was wearing a leather corset and carrying a bloody great duelling sword. But….. he was singing “School’s out for ever” – absolutely thrilling for the now secondary school aged me who had already decided that Latin was unlikely to feature in my day-to-day life once I got out into the big wide world. I didn’t actually get the “School’s Out” album because my pocket money didn’t stretch that far, but “Billion Dollar Babies” came my way as a birthday present and I still own that same copy today.

KRAFTWERK – “AUTOBAHN”
Tuesday dinnertimes in school had a never-missed ritual of listening to the rundown of the  new Top30 on “wonderful” Radio 1, so it was while clutching onto a tiny, crackly transistor radio that I first heard a hypnotic, repetitive, other worldly piece of music that I was quickly informed was by a bunch of Germans called Kraftwerk, the song was called “Autobahn” and the track playing on the radio was a short edit of a piece that took up a complete side of an album. Where were the guitars? Where were the drums? Who cares? Myself and a schoolfriend Ally Ross quickly became obsessed and would endlessly dissect the full 20-odd minutes version endlessly during school lessons (German class, funnily enough!!!). During punk, I would take the drone-like aspects of Autobahn and the ethos of The Adverts “One Chord Wonders” and try to meld them into a concept that aimed at Wire-like strangeness. In reality, it sounded truly, truly awful.

SEX PISTOLS – “ANARCHY IN THE UK”
I’d first become aware of the Sex Pistols via an interview they did in Sounds magazine with Jonh Ingham and their absolute belligerence had me hooked even though I hadn’t heard them. That changed when it was announced that they would be making their debut TV appearance on Granada TV’s “So It Goes” programme. I somehow managed to persuade the landlord of Ffynnongroyw Miners institute to put it on the TV there and probably didn’t endear myself to the regulars as they were subjected to Johnny Rotten’s bellowed “Get off your arse” as the introduction to a three minute musical bludgeoning in which mic stands were kicked over, a chair was thrown across the stage and a rubber-clad Jordan fell flat on her bum. The programme finished with Rotten glaring at the camera like he was ready to commit murder and an off duty miner probably speaking for the rest of the room when he said “What the bloody hell was THAT?”. Me? I went home, changed my wardrobe and my record collection and set myself on a course of being an out-and-out rulebreaker, something I hope that I’ve maintained to this day.

DILLINGER – “COCAINE IN MY BRAIN”
I became familiar with Jamaican music via the bluebeat and ska that the original skinheads were listening to and later via Bob Marley’s rise to global superstardom. None of that quite prepared me for Dillinger’s “Cocaine In My Brain” however, an altogether more aggressive and in-your-face slab of Kingston street poetry that suddenly came blasting out of the downstairs jukebox in Rhyl’s Savoy Bistro. The song was probably the most played tune in the Bistro that summer and to this day it remains the one that I always associate with that fabled playground of my youth.

DONNA SUMMER – “I FEEL LOVE”
I’d be at a gig pretty much every night during the mid and late 70s and either at the Bistro or in my native Ffynnongroyw if I wasn’t, so I rarely went into other nightclubs in Rhyl. As a result I can’t actually remember why the hell I was in The Schooner in Rhyl on a Saturday night in early summer. What I do remember was literally dropping my glass when a sound like a heat shimmer ushered in a robotic dance beat that sounded like it was being beamed in from another planet. Donna Summer had already piqued my interest via her (supposedly simulated) orgasmic moans on “Love To Love You Baby”, but “I Feel Love” was a game changer on a purely musical level rather than because of any moral outrage attached to it. 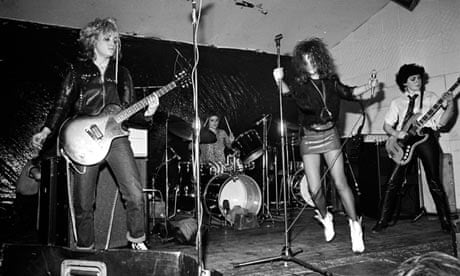 THE SLITS – “SHOPLIFTING”
Thursday September 15, 1977. Yes, it was that important to me that the date is etched forever in my memory. The Slits, that feral all girl gang that were creating chaos and newspaper column inches simply by being themselves, were coming to the Talardy Hotel in St Asaph for a gig. Their performance was everything I’d hoped it would be, loud, brash, frequently teetering on the edge of collapse and completely unselfconscious. The song that stood out for me that night was “Shoplifting” thanks to its sonic assault of girl gang vocals, Palmolive’s powerhouse drumming and, most of all, Ari’s shriek as the song reached its coda. The band’s sound had modified by the time they came to record the seminal “Cut” album, but it’s no coincidence that “Shoplifting” is the song on the album that comes closest to retaining the original Slits punk sound.

The B52s – “ROCK LOBSTER”
Saturday trips to Eric’s in Liverpool to see which ever band was headlining would be preceded by visits to Probe Records, a little way down Matthew Street, where I’d pick up mostly Jamaican 12” imports and be routinely insulted by Pete Burns who worked behind the counter. Digging through the crates one afternoon, I suddenly became aware of a tune playing in the shop that was strange and weird yet oddly catchy. Chancing another stream of vitriol from Mr Burns, I asked him what it was and he said “It’s a US import by the B52s. Shite, isn’t it?” No, Mr Burns it most definitely wasn’t, and I duly took a pristine only-available-on-import “Rock Lobster” off his hands only to leave it on the seat on the train home – now that really was shite!!!

OK, there you have it – ten moments where music really did make the earth stand still for me. I’ve shown you mine so are you going to show me yours?