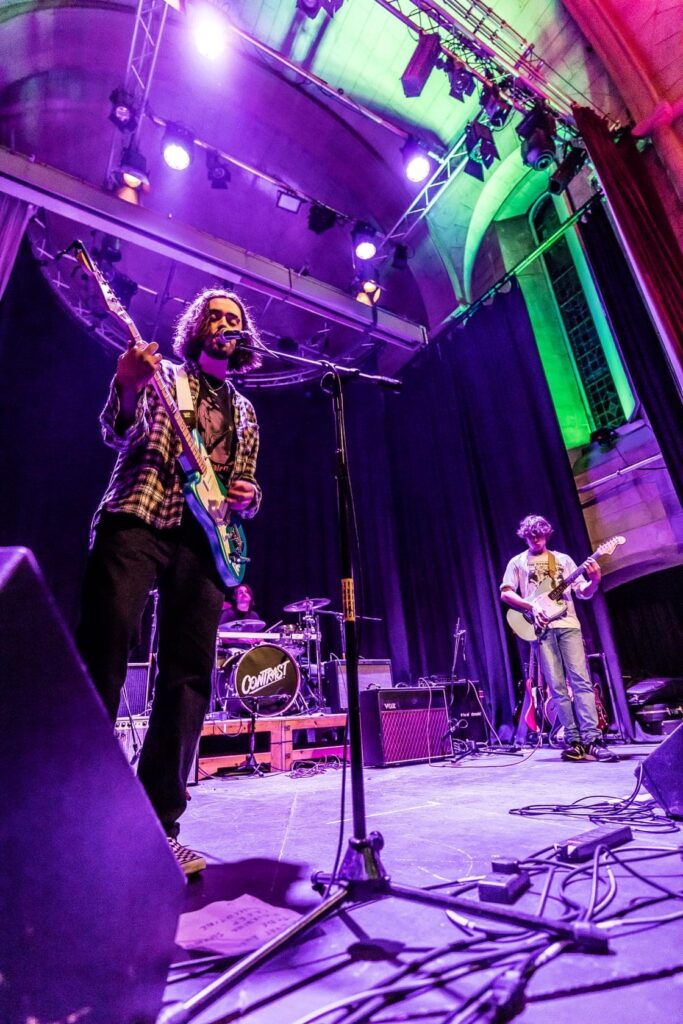 “Back To Square One”
This piece could have been written about any number of bands from North Wales over the years but for our purposes here I’m going to focus on The Pastimes.

Right now I think that they are the most exciting band in the region for any number of different reasons, all of which are pre-requisites for success in an industry that has always stacked the odds against wet-behind-the-ears hopefuls whatever the era.

The Pastimes write songs that combine grit and melody in the kind of equal measures that should make commercial acceptance an inevitability, their live performances are transcendent, they have a work ethic that is second to none, they are organised and they are focused.

Success therefore should be a racing certainty but, unless they buck a trend that has for the most part remained unbuckable, they are doomed to join a long list of exceptional regional talents who were never able to translate their success at home into an (inter)national career.

This may seem a strange state of affairs at first glance, but to assume that talent + hard work = success would be to view the music industry as some kind of utopian meritocracy and that was very rarely ever the case, even before the advent of Simon Cowell with his determination to reduce music to the sonic, lyrical and emotional equivalent of semolina pudding.

The Pastimes are currently playing all the “right” venues, gradually increasing the radius within which they perform live to take in all the major northern cities, inevitably playing the hippest venues to full or sold out houses and, given their organisational skills, they will no doubt already be eyeing up the Midlands, South Wales and the North-east as their next targets.

And inevitably their eyes will ultimately alight on London.

“Tighten The Grip (Getting Tighter)”
Ahhh London, where the streets are paved with gold, where dreams are bought and sold and where, almost without exception, ambitions are blighted and soiled.

The capital has held a Vulcan-like death grip on the British popular music industry since the 1950s when England’s equivalent of New York’s Tin Pan Alley was centred around Denmark Street and impresarios such as Larry Parnes groomed early homegrown rock n roll singers such as Tommy Steele and Billy Fury for stardom, exploitation and control.

That control was temporarily broken by the emergence of a certain Fab Four, but even they had their London counterparts in the Rolling Stones and virtually every musical upheaval since has had the capital as its epicentre, whether it be mod, punk, indie or whatever.

OK, some of our major cities have spawned successful bands, with Liverpool, Manchester, Sheffield and the like all acting as the starting points for successful acts and mini scenes, but how many successful bands have come out of smalltown UK – can you name a single successful band from Ballymena or Brechin, Builth Wells or Bodmin Moor?

The simple answer is that you can’t and that is because the London scenemakers and industry insiders in the record companies, booking agencies and Fleet Street will grudgingly pay lip service to other major conurbations from time to time but will have never have time for Shitsville, Backwatershire.

“…And The Old School Backfire”
The closest that London came to losing its overall control was with the advent of punk, a supremely ironic possibility when you consider that punk started off very much as a London scene fired up by the Pistols, The Clash and The Damned, three bands who were managed (controlled?) by the bastard offspring of Larry Parnes and his like in Malcolm McLaren, Bernie Rhodes and Jake Riviera.

One of punk’s biggest and most successful innovations was the popularising of record labels based outside London – for the three cities mentioned above one can cite Zoo, Factory and Warp as examples – but these labels were always hamstrung by distribution problems if they tried to maintain their independence and integrity rather than sign a licensing deal with a London major.

The result of this was people like Echo & The Bunnymen and Buzzcocks relocating to London to sign with offshoots of Warners and EMI respectively, a particular kick in the (nether) regions in the case of Buzzcocks whose New Hormones imprint had pretty much established the idea of the self-owned, non-London based DIY label.

London record companies quickly re-established control by the simple illusory trick of setting up subsidiary labels like Korova – hello, Bunnymen – and the old school was once again firing on all cylinders, having learned an important lesson: co-opt anything that comes out of the regions that takes your fancy and simply bury the rest.

“Let’s Watch The Blind Eyes Turning”
If London has a certain amount of disdain for the rest of England, it has a positive loathing for Northern Ireland, Scotland and, especially, Wales.

Other than that brief period where a clutch of bands – principally Stereophonics, Manics, Feeder, Catatonia and SFA – emerged at roughly the same time, there has never been a lot of love bestowed upon bands from our green and pleasant land by the London based industry, and one suspects that the above mentioned quintet were only tolerated for as long as “Cool Cymru” was a viable marketing concept in the wake of Britpop.

For the most part though, London has been content to turn Nelson’s eye toward anything going on west of Offa’s Dyke and the result is that so many potentially amazing bands from Wales remaining unheralded and unrecognised outside their homeland – sticking to bands that I myself have worked with, I can reel off names like Homespun, Bitchpups, Der Bomber and Kentucky AFC who would have been subjects of bidding wars had they come from Camden rather than Cymru.

“Stains On The Wall”
One band from smalltown North Wales did make it big however and when they slipped through the net and started an impressive run of five Top30 albums and sixteen Top50 singles they were routinely savaged by a London press outraged at the idea that a band from a fading seaside town could make it without their say-so.

The band was The Alarm of course, and the viciousness and sheer amount of abuse thrown their way amply illustrated how unforgiving the capital’s tastemakers could be when they were faced with a band who hadn’t been given their stamp of approval – “a poor man’s Clash and/ or U2” are some of the more publishable examples of the mocking that the Alarm were subjected to – all of this from a music press who were championing such cultural giants as Johnny Hates Jazz and Curiosity Killed The Cat.

Away from the slings and arrows of London, Mike Peters and company were highly regarded, particularly in America where the likes of Bruce Springsteen, Bob Dylan and Neil Young were highly supportive and refreshingly free of the UK music establishment’s Londoncentric obsessions and whose opinions surely carried more weight than those of some pimply A&R assistant on one of CBS’s lesser known subsidiary labels.

“Now See The Ball Is Rolling”
Which brings us back to today and, most importantly, to The Pastimes.

London, and by extension the music industry itself, will not come looking for them and it will certainly do them no favours when the band come knocking on the door, as they inevitably will.

The qualities that have them standing head and shoulders above the rest of the litter have already been outlined above, but they will not be enough in themselves to push them ahead of Posh Piers, Eton Egon and the rest of the Chelsea chinless wonders whose familial connections will guarantee them an “in” to the industry’s corridors of power.

The only way that the Pastimes will be accepted by London’s tastemakers is if they come up with something that makes them so newsworthy that they can, quite literally, be ignored no longer.

Will they manage to achieve that seemingly impossible dream? Time will tell, but I would say that they are North Wales’s best bet in a generation to storm the bastions of old London town and, given that they’ve managed every task that they’ve set themselves thus far, I wouldn’t bet against them bucking that aforementioned “unbuckable” trend.

The eagle-eyed among you will have noticed that the paragraph headings are all lyrical snatches from Killing Joke’s “Empire Song” so I’m going to wrap up this piece with a quote from a  different KJ song that I dedicate unrepentantly to London’s scenemakers and a pun based on the title of the new Pastimes single….

“Look at the controller, a Nazi with a social degree”

The “Tide” is about to turn…